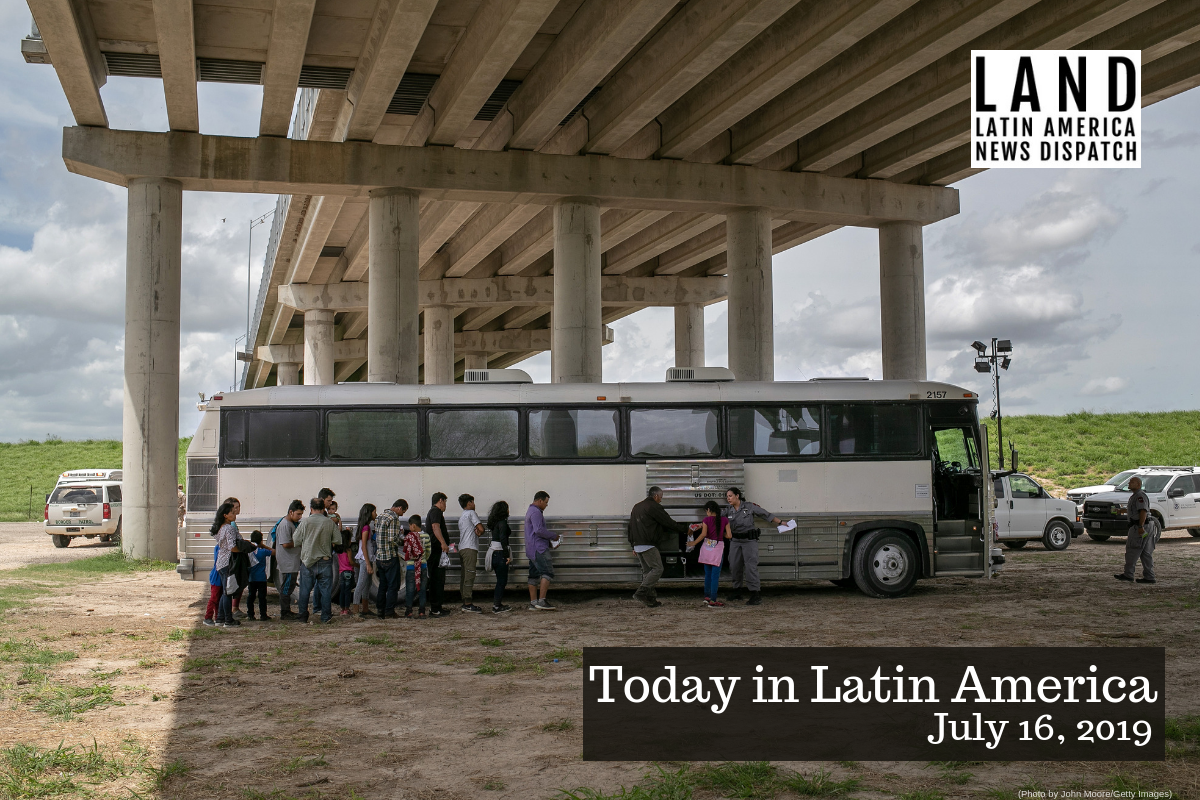 Immigrants wait to be transported to a U.S. Border Patrol processing center after they were taken into custody on July 02, 2019 in McAllen, Texas. (Photo by John Moore/Getty Images)

U.S.-MEXICO BORDER: The Trump administration will dramatically restrict access to the United States by enacting draconian asylum request policies, denying legal protections to migrants traveling to the country by land. The plan, published in the Federal Register yesterday, details how migrants who pass through Mexico on their way to the U.S. will become ineligible for asylum requests. Although the vast majority of those affected would be Central Americans, asylum-seekers from Africa, Asia, and the Middle East, whose first port of entry is in Mexico, would also experience the effect of the policy adjustment. Likely to be challenged in court, the new policy is set to go into effect today.

U.S.-MEXICO BORDER: Referring to the Trump administration’s new approach on asylum-seekers, Foreign Minister Marcelo Ebrard has said that Mexico “does not agree with any measure that limits access to asylum.” During yesterday’s press conference, Ebrard also noted that the U.S.’s measure “will not affect Mexican asylum-seekers,” as they do not need to transit to other countries to reach the United States. Ebrard guaranteed that Mexico would maintain its current asylum practices, denying that a “safe third country” agreement would be signed with the U.S.

MEXICO: A wildfire has spread throughout Sian Ka’an nature reserve in the Yucatán Peninsula, consuming over 6,000 acres (2,500 hectares), just over 19 miles (30 kilometers) south of Tulum. Despite the deployment of seven fire brigades and one helicopter in the fire-fighting operation, only 30 percent of the fire has been able to be contained, according to local environmental authorities. Located in the province of Quintana Roo, the Sian Ka’an reserve is a UNESCO World Heritage site and home to at least 14 endangered species.

CUBA: On Saturday, the Cuban legislature unanimously approved the island’s new electoral law. The measure allows for the president and vice-president to select the prime minister, who can serve a maximum of two five-year consecutive terms. The National Assembly will now have 474 members instead of 605, and the Council of the State will see its membership reduced from 31 to 21 representatives. The Communist Party will remain the only political organization in the country as the new electoral law does not recognize a multiparty system.

DOMINICAN REPUBLIC: Suspicions continue to arise as the U.S. State Department confirmed that an eleventh American died while vacationing in the Dominican Republic. The mother of Tracy Jerome Jester Jr. of Forsyth, Georgia, told a local news station that his son “threw up blood” moments after complaining about “a soda tasting off.” Jester Jr. passed away on March 17 from respiratory illness, according to Dominican authorities. Dominican-born Congressman Adriano Espaillat (D-NY) has suggested improving food and drink standards in the Caribbean nation in the wake of these mysterious deaths.

PUERTO RICO: Thousands of Puerto Ricans participated in massive demonstrations outside of Governor Ricardo Rosselló’s residence and in front of the Capitol in San Juan. Many believe that the unveiling of the  “#Telegramgate” scandal, taking its name from a document leak showing the profanity-laced private chat between the governor and his associates, will result in “the end of Rosselló’s time in office.” Yesterday, artists like Bad Bunny, Kany García, Ricky Martin, and Residente joined in calling for Rosselló’s immediate resignation.

EL SALVADOR: The second trial of a teenager who was sentenced for murder after having a stillborn following a rape began yesterday in San Salvador. The reopening of the case comes after the country’s Supreme Court overturned and annulled the murder conviction against 21-year-old Evelyn Beatríz Hernández in February of this year. In her first trial, a Salvadoran tribunal handed Hernández a 30-year prison sentence after the judge said that failing to seek antenatal care amounted to murder. “I only asked for justice after being raped,” said Hernández yesterday.

BOLIVIA: Concerns and demand for justice grow as femicide rates spike in Bolivia. Seventy-three women have been murdered since the beginning of 2019, the highest toll in the last six years. The murder Mery Vila on July 11 is the latest femicide reported. Vila’s partner, who was drunk when the incident happened, had already been in prison before murdering the  26-year-old woman. Feminist and human rights organizations in Bolivia are asking the government to allocate more resources in the fight to end gender-based violence.

VENEZUELA: Despite several U.S. economic sanctions, the government sold $40 million worth of gold last week. The Central Bank sold almost one ton of the precious metal on July 12, reducing Venezuela’s gold reserves to a three-decade low. The Maduro administration has allegedly sold 24 tons of gold since April, with buyers in the Middle East and Africa. The Wall Street Journal reported in June that 7.4 tons of gold were “secretly delivered” to a refinery in Uganda.

REGION: The border between Brazil and Paraguay has experienced five murders in the last week. The latest incident took place on July 13 in the Paraguayan locality of Pedro Juan Caballero, where two men were shot down in a busy street. Smugglers have used the city to traffic weapons from the U.S. into Brazil and Paraguay, as Argentina’s intelligence agency recently announced. On July 12, gunmen killed 23-year-old Yder Porto on the Paraguayan side of the border, who allegedly had ties with drug dealers in the vicinity. Although the cases do not appear to be linked, two other men were murdered on July 11 in the same border town.