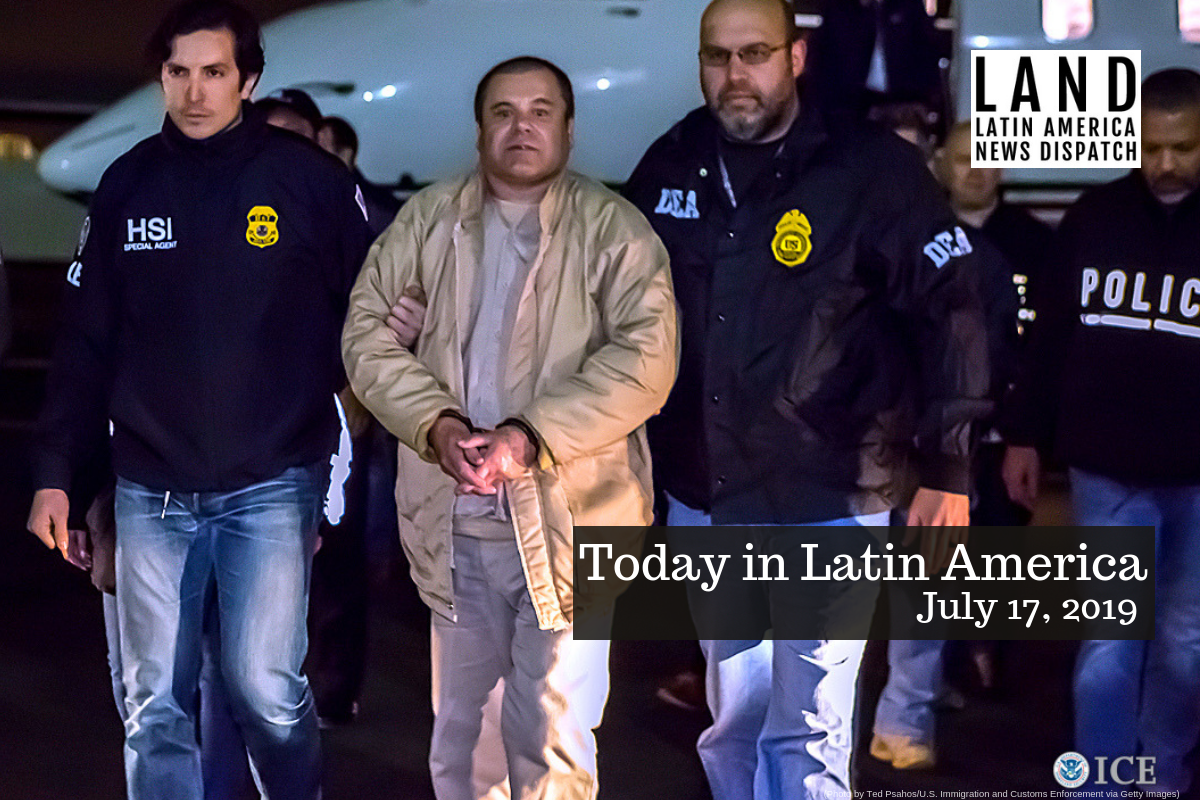 UNITED STATES: A judge sentenced Mexican drug lord Joaquín “El Chapo” Guzmán to life on Wednesday. The former leader of the Sinaloa Cartel was initially convicted in February. The charges, which include international drug trafficking, money laundering, criminal conspiracy, and weapons-related offenses, carried a mandatory sentence of life in prison. Guzmán led the biggest drug-smuggling ring in the world, with operations spanning across the globe over a quarter of a century. U.S. authorities want “El Chapo” to pay back $12.7 billion that he allegedly earned during a lifetime of drug-trafficking activities.

BORDER: The American Civil Liberties Union (ACLU) filed a federal lawsuit against the Trump administration following its newest restriction on asylum-seekers. The document, supported by other civil rights groups like the Southern Poverty Law Center and the Center for Constitutional Rights, is asking for a declaration that the policy “is unlawful and invalid.” as well as an injunction that prevents its implementation. Around 18,700 migrants are said to be stranded at the border, following yesterday’s asylum policy change.

UNITED STATES: The State Department announced that Secretary Mike Pompeo would start a four-nation tour of the region over the weekend. Sec. Pompeo will first stop in Argentina, where he is expected to attend a “counterterrorism ministerial” in Buenos Aires to commemorate 25 years of a bombing of a Jewish center in the capital. On Saturday, he will meet Ecuador’s President Lenín Moreno in Guayaquil. The following day, the American delegation will make stops in Mexico and El Salvador, where he will be addressing pressing immigration issues.

CUBA: The government approved new fishing regulations aimed at curtailing illegal fishing and recovering fish populations that are in decline. The first of its type since the 1959 revolution, Cuba says that the maritime rule “guarantees food sovereignty.” The policy protects small-scale fishers in coastal communities, prompting a conservation strategy based on scientific research.

PUERTO RICO: Former Education Secretary Julia Keleher, accused by federal authorities of steering funds to unqualified contractors, was released yesterday after posting bail. After saying she was innocent of the seven charges pressed against her, Keleher paid $30,000 and left the tribunal at Hato Rey, where protestors received her. Multitudinary anti-government demonstrations continue today onto the fourth day in Old San Juan, as Puerto Ricans demand that Governor Ricardo Rosselló steps down. Protests have escalated and turned violent, with police clashing with demonstrators yesterday. Royal Caribbean International announced yesterday that it had canceled its stops in San Juan as the company fears that protests “might get worse.”

GUATEMALA: A joint investigation between the U.N.-backed anti-graft commission (CICIG) and the financial crimes unit of the Prosector’s Office (FECI) has found that authorities in the Ministry of Health collected Q55 million ($7.16 million) in illegal kickbacks between 2012 and 2014. The three-year probe looked at over thirty-seven thousand emails; 112 people are said to be involved in the multi-tiered corruption scheme. The Prosecutor’s Office issued arrest warrants against ten elected members of Congress.

COSTA RICA: The government has signed a law that prohibits the use of styrofoam. President Carlos Alvarado and Minister of Environment and Energy ratified the nationwide ban yesterday after the bill was approved by Congress in early June. The prohibition of polystyrene containers, which will come into effect in 24 months, includes a ban on its importation, commercialization, and usage in Costa Rican businesses.

PERU: U.S. Marshals arrested former president Alejandro Toledo (2001-2006) in California yesterday. Toledo faces an extradition request in Peru following his connection to a bribery scheme valued at $20 million connected to construction giant Odebrecht, for which he also faces an 18-month preventive detention order in his country since February 2017. Toledo will attend court on Friday, where a judge will evaluate if he can get bail on the high-profile corruption charges.

VENEZUELA: The opposition-controlled legislature announced a new ad hoc board for Venezuela’s Central Bank (BCV). Juan Guaidó, head of the Assembly, named five people to the BCV: Nelson Lugo; Manuel Lago Rodríguez; Guiacoima Cuius y Ricardo Villasmil Bond. Although Guaidó did not explain how the ad hoc board will function, a statement provided by the Assembly points out that the move seeks to protect Venezuelan actives abroad.

BRAZIL: Justice Minister Sérgio Moro will have to disclose any ongoing investigation into American journalist Glenn Greenwald, founder and editor of news site The Intercept. The president of the Brazilian Supreme Court, Dias Toffoli, ordered on Monday that the federal police, the attorney general’s office, and the ministry of the economy must provide information of any actives probes against Greenwald. The ruling comes after the federal police allegedly launched an investigation into the journalist’s finances, which sparked domestic and international outrage.