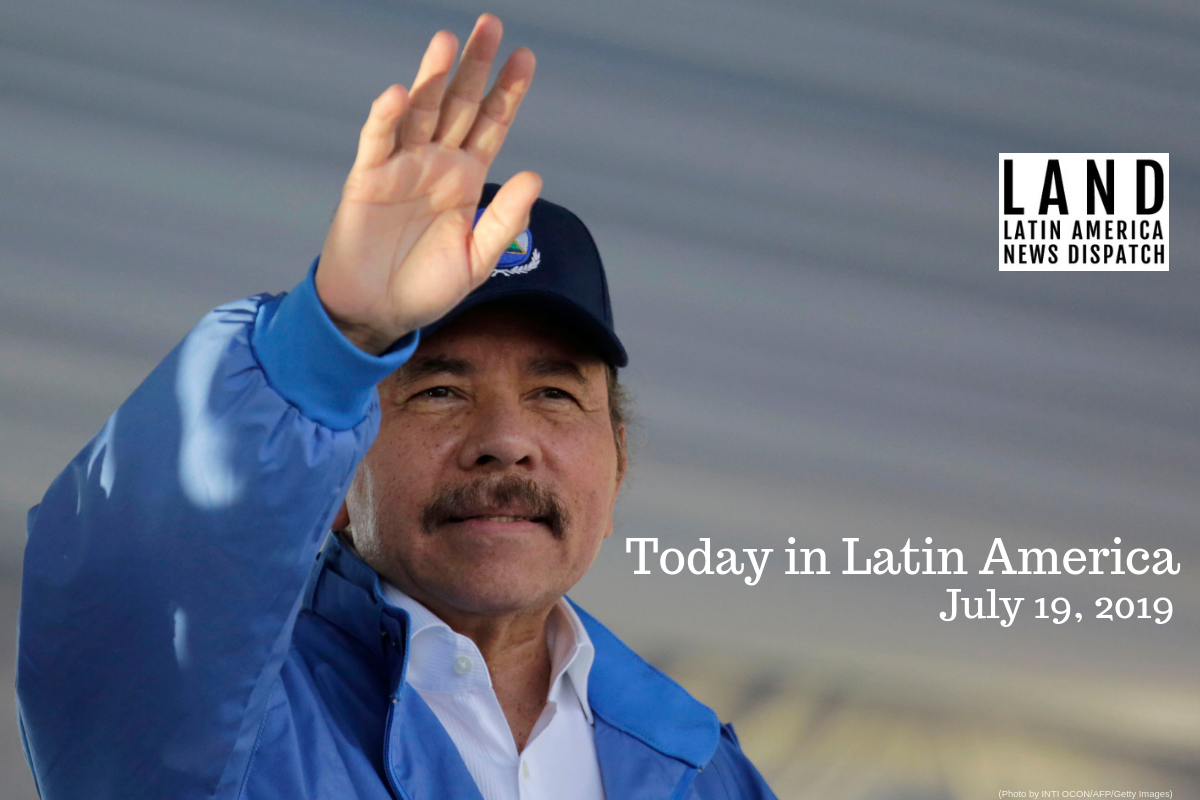 Nicaraguan President Daniel Ortega, waves to supporters during a rally in Managua, Nicaragua, on August 22, 2018. (Photo by Inti Ocon/AFP/Getty Images)

NICARAGUA: Large festivities expected in Managua as the government of President Daniel Ortega celebrates forty years since the victory of the Sandinista Revolution, where he participated in overthrowing dictator Anastasio Somoza, the de facto ruler of Nicaragua between 1967 and 1979. Vice-president and First Lady Rosario Murillo confirmed that over 500 foreign delegates would attend the celebrations, although no Latin American heads of state are expected to be present. Amid an unresolved political crisis that has unraveled since Ortega crackdown on anti-government protesters in April 2018, the opposition has proposed to restart peace talks with the Sandinista regime on July 31.

U.S.-MEXICO BORDER: During a hearing with members of Congress yesterday, Kevin McAleenan, Acting Secretary of the Department of Homeland Security (DHS), said that fewer than 1,000 family separations have occurred at the border, noting that the “vast majority” of migrants are kept together. McAleenan told members of the House Oversight and Reform Committee that children are only separated from their parents at the border “under rare circumstances” like health or safety concerns. Lawmakers pressed the DHS leader for hours, condemning the conditions in detention facilities at the border.

MEXICO: President Andrés Manuel López Obrador says the country will seek to recover Joaquín “El Chapo” Guzmán’s drug money that he says “legally corresponds to México.” After yesterday’s historic sentence against the drug kingpin, AMLO vowed to reduce violence in Mexico by “creating a society less obsessed with making money at any cost,” Reuters reports. U.S. prosecutors estimate that Guzmán trafficked over $12.7 billion during his time as boss of the Sinaloa cartel.

UNITED STATES: ‘Dangerous’ heatwave expected in various parts of the country over the weekend, with temperatures reaching 115 °F (46 °C) in the eastern seaboard, the central plains, and the midwest. Nearly half of the continental United States will be under a “heat dome:” when high pressure acts as a cap on the atmosphere, trapping heat and drying the air. According to the National Oceanic and Atmospheric Administration (NOAA), June 2019, global land and ocean temperature had the highest average for that month since recordkeeping began in 1880.

PUERTO RICO: Island police reports a station in the southern city of Guayama has been broken into by burglars, who stole ammunition and weapons. Commissioner Henry Escalera Rivera said that a group of unidentified suspects took 30 pistols, 18 rifles, and 4,000 rounds of ammunition from the storage locker. Escalera Rivera also noted that a message “threatening Governor Ricardo Rosselló” was found on the crime scene.

EL SALVADOR: A judge handed out additional criminal charges for soldiers involved in the El Mozote massacre, where the Salvadoran army murdered 989 farmers in Dec. 1981. Yesterday, thirteen out of the 17 military officers currently on trial were accused of the crimes of forced disappearance, torture, and forced displacement. During a press conference held a month ago, President Nayib Bukele vowed to give reparations to the victims’ relatives.

HONDURAS: According to the Consular and Migratory Observatory of Honduras, Mexico has deported 38,633 Hondurans since the beginning of the year. The Observatory also reported that from this group, 12,662 were unaccompanied minors. In total, over sixty thousand Honduras have been repatriated, which represents a 49 percent increase in the total number of deportees in comparison to 2018.

ECUADOR: A lesbian couple in the port city of Guayaquil became the first to legally marry in Ecuador following last month’s landmark ruling. Michelle Avilés and Alexandra Chávez were wed at the civil registry yesterday morning and told local reporters that their celebration would take place in November. Ecuador became the seventh country in the hemisphere to approve same-sex marriage.

PARAGUAY: Foreign Minister Luis Alberto Castiglioni said that the country is seeking to negotiate bilateral trade deals with its Mercosur partners, primarily looking at cars and car parts. Castiglioni noted that it would first try to arrange an agreement at the end of the month with Brazil, the eighth largest motor vehicle producer in the world. Paraguay is attempting to diversify its trade following a slump in soybean production. According to the country’s Ministry of Finance, the economy is expected to grow under 3 percent this year, partially attributed to the decrease in the legume’s exportation.

BRAZIL: The Amazon registered a substantial increase in deforestation for the first two weeks of July, raising red flags ahead of a potential trade deal with the European Union. According to preliminary data provided by the Brazilian Institute of Space Research (Inpe), over 1,000 square kilometers of the jungle were depleted, 68% more than during July 2018. During last month’s first round of bilateral negotiations, European leaders stated that they would not sign the EU-Mercosur agreement if Brazil fails to commit to the environmental clauses like the Paris Climate Accord.