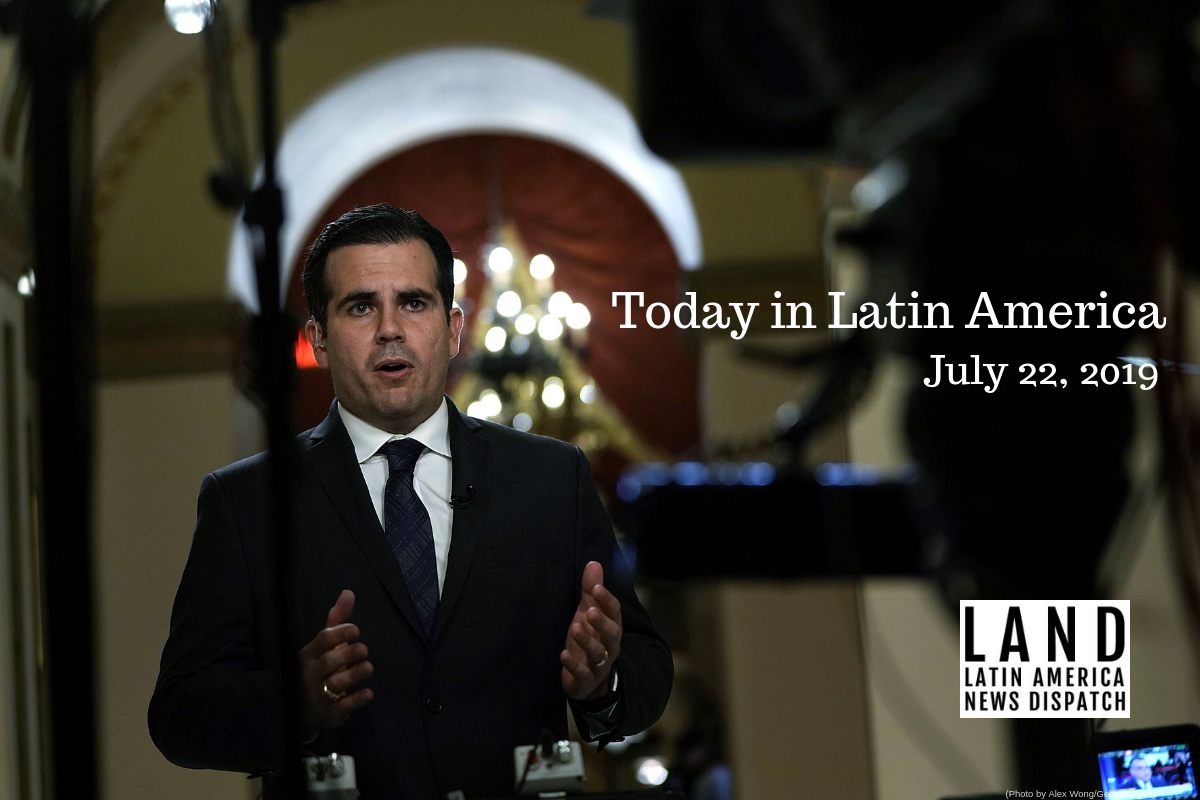 PUERTO RICO: Governor Ricardo Rosselló announced via Facebook Live yesterday that he will not seek reelection in 2020 and will step down as president of the pro-statehood New Progressive Party (PNP). Facing an angry public uprising, Rosselló said that he “is listening” to Puerto Ricans, but noted that he would remain in office until the end of his term. Today, a national strike has been called by several sectors of the Puerto Rican society, demanding Governor Ricardo Rosselló’s resignation for the second week straight. Many universities, businesses and shopping malls will remain closed.

REGION: Secretary of State Mike Pompeo met with Mexican Minister of Foreign Affairs Marcelo Ebrard yesterday, announcing that Mexico has made “significant advances” in stemming U.S.-bound migration. Last week, the Department of Homeland Security reported a 28 percent decrease in migrants apprehended at the border. Given the progress in enforcement efforts, Ebrard believes that Mexico sees “no need to negotiate” a ‘safe third-country’ agreement with the United States.

MEXICO: Ernestina Godoy, Mexico City’s chief prosecutor, has accused the previous administration of “altering” data to hide the city’s real crime rate. After reviewing hundreds of documents, Godoy says that although it appears crime increased in 2019, some measures indicate it has fallen. Murders in Mexico City are up 12% while violent crimes are down 8%. The statements come with a national spike in homicides as a backdrop: 14,603 murders recorded from January to June, which puts the country on course to surpass its all-time high.

PUERTO RICO: Edgar Martínez was inducted into baseball’s Hall of Fame yesterday, becoming the fifth Puerto Rican to gain such distinction. The former slugger and third baseman played with the Seattle Mariners from 1987 through 2004, joining as a batting coach between 2015 and 2018. During the speech he delivered at the ceremony, Martínez said he felt “honored” to have his name alongside other island greats like Roberto Clemente, Roberto Alomar, Iván Rodríguez, and Roberto Cepeda.

COSTA RICA: The Ministry of Health alleges that “adultered” alcohol is responsible for the deaths of 19 people in the country. Fourteen men and five women, ranging ages 32 to 72, died in June after consuming a drink called “aguardiente” with toxic levels of methanol. The government has announced that is has confiscated “over 30,000 bottles” of alcohol from several different brands that could potentially be tainted with methanol and other poisonous chemicals.

PANAMA: On Friday, Panama became the first Central American country to issue a nationwide ban on plastic bags. The law, decreeing that retailers, supermarkets, and pharmacies will have to stop offering plastic bags in their check-out, came into effect 18 months after first being approved on Jan. 2018. Sixty countries have effected bans on plastic bag usage around the world, with Panama becoming the third in the region after Colombia and Chile.

VENEZUELA: Over the weekend, the U.S. Southern Command (Southcom) accused a Venezuelan fighter jet “aggressively shadowing” an American reconnaissance aircraft. The Venezuelan military argues that the U.S. plane “violated its airspace.” The incident took place on Friday when the Venezuelan jet followed the U.S. EP-3 plane, operated by the U.S. Navy, as it performed a “multi-nationally recognized” and approved mission over the Caribbean Sea. Southcom also alleged that the Venezuelan plane made an “unsafe approach” that jeopardized the crew and aircraft as it flew international airspace.

BRAZIL: President Jair Bolsonaro has dismissed a recent deforestation report created by a federal environmental agency as “lies.” Redacted by the National Institute for Space Research (INPE), a research unit of the Brazilian Ministry of Science, Technology, and Innovation, the report indicates that the Amazon has lost more than 1,000 square kilometers (386 square miles) of forest in the first two weeks of July. During a press conference on Friday, President Bolsonaro said that INPE should coordinate the report’s publication with high-ranking officials in his government.

ARGENTINA: An environmental group issued a plea to the Supreme Court to protect endangered species in Argentina. Lawmakers representing Greenpeace Argentina issued a statement saying that less than 20 jaguars remain in the Gran Chaco region. The case is being brought against Chaco and three other provinces of northern Argentina —Salta, Santiago del Estero, and Formosa— where deforestation has increased since genetically-modified soy was introduced two decades ago.

URUGUAY: In a recent report, the World Bank has ranked Uruguay as the Latin American nation with the highest income per capita with a yearly average salary of $15,650. Second in the regional rank is Chile, with an average $14,670 annual income per capita. Uruguay and Chile are considered to be middle-to-high income countries. Leading the global rankings is Switzerland, with $83,580 per capita, followed by Norway, with $80,790 per capita.