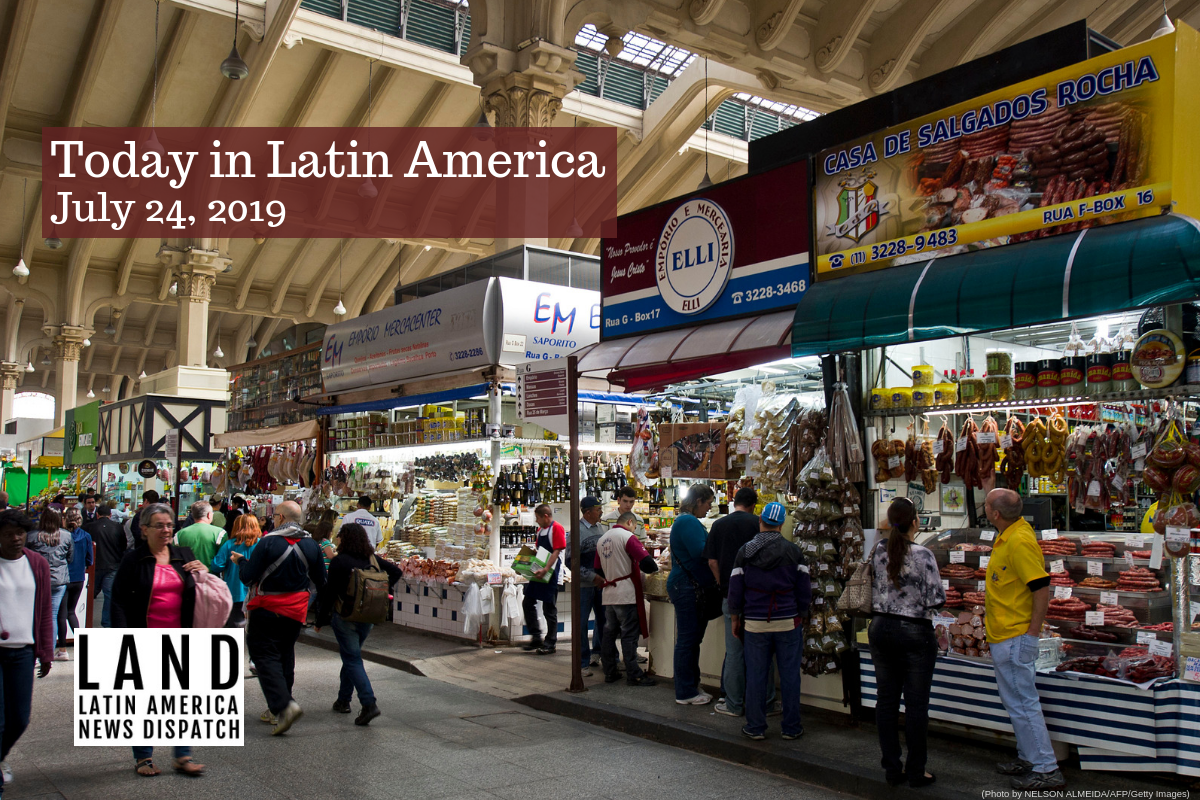 View of the central market in downtown of Sao Paulo, Brazil. (Photo by Nelson Almeida/AFP/Getty Images)

REGION: Yesterday, the International Monetary Fund (IMF) significantly reduced its growth estimates for Latin America amid a global economic slowdown. Initially forecasted to grow 1.4 percent in April, the Fund said that the region is now expected to grow at 0.6 percent this year. The multilateral agency also notes that a 35 percent economic contraction will cause “devastation” in Venezuela. This update now has Mexico and Brazil, the region’s largest economies, growing at 0.9 percent and 0.8 percent rate, respectively.

Mexican President Andrés Manuel López Obrador criticized the IMF’s use of the GDP as a valid metric for growth and development. “I do not have much confidence in these organizations… They were the ones who pushed neo-liberal economics in Mexico,” said the president yesterday.

U.S.-MEXICO BORDER: An 18-year-old U.S. citizen who had been “wrongfully detained” for three weeks at a border facility was released yesterday. According to the adolescent’s lawyer, Customs and Border Patrol (CBP) agents apprehended Francisco Erwin Galicia at a checkpoint in Falfurrias, Texas, on June 27 after failing to provide proper documentation. Galicia was only able to communicate with his family once he was transferred into an Immigration and Customs Enforcement (ICE) detention center last July 20.

MEXICO: Murders up 5.3 percent in Mexico, setting a new record for the first six months of the year since recordkeeping began in 1997. Officials recorded 14,603 murders from January to June, versus 13,985 homicides registered in the first six months of 2018. The homicide rate stands at 14 per 100,000 inhabitants. The northern states of Sonora, Nuevo León, and Hidalgo, territories known to be controlled by drug cartels, have all registered homicide increases above 65 percent.

GUATEMALA: Declaring that the country “has not been good,” U.S. President Donald Trump threatened to place tariffs on remittances sent to Guatemala following the country’s high court block on a potential ‘safe third-country’ agreement. In response, Guatemala’s President Jimmy Morales blamed the Constitutional Court and his political opponents for undermining his close ties to the United States. At $9.28 billion, remittances accounted for 11 percent of the country’s GDP in 2018.

CUBA: A new study published in the Journal of the American Medical Association suggests that the alleged sonic attack on the U.S. Embassy in Havana “changed peoples’ brains.” Researchers took MRI brain scans from forty embassy officials, 23 men and 17 women, who were exposed to the incident that reportedly took place between late 2016 and May 2018. Although the neuroimaging findings are not conclusive, scientists observed “differences in connectivity in the brain’s auditory and visuospatial areas.” Described by diplomats as “buzzing,” “grinding metal,” and “piercing squeals,” the incident was recently attributed to crickets on Jan. 2019.

PUERTO RICO: Governor Ricardo Rosselló is accumulating resignations from members of his cabinet as a federal judge issued warrants for his officials’ cellphones and as local outlets announce his own “imminent” resignation. Yesterday, Ricardo Llerandi left his post as chief of staff for Rosselló. Llerandi joins a list of more than a dozen officials have resigned since the scandal broke out, including Secretary of State Luis Rivera Marín, Rosselló’s spokeswoman Dennise Pérez, and ex-president of the Economic Development Bank Gerardo Portela. Although protests are expected to continue throughout the rest of the week, another national strike has been called for tomorrow. Local news outlets have reported that security forces have fired tear gas at protesters.

COLOMBIA: Reuters reports that the Colombian airforce might be looking to update its fleet and would be willing to invest over $1 billion. The government is analyzing offers from Spain, Sweden, and the United States to replace the 20 Israeli-made Kfir jets purchased three decades ago. Most recently, the U.S. offered Colombia fifteen F-16 fighter jets worth $300 million, which would become Colombia’s biggest military purchase in its history.

VENEZUELA: The government has blamed yesterday’s massive power outage on saboteurs that committed an “electromagnetic attack” on the country’s power grid. After the blackout affected the majority of the country, the Venezuelan opposition organized a rally in Caracas where leader Juan Guaidó said that “it is not an option to get used to this tragedy.” Yesterday, the opposition-controlled National Assembly approved to return to the Inter-American Treaty of Reciprocal Assistance (TIAR), a hemispheric defense agreement. Also known as the Rio Pact, the central principle says that an attack on any member state is an attack “on all TIAR members.”

BRAZIL: The Federal Police (PF) arrested four people accused of having hacked the phones of Economy Minister Paulo Guedes and Federal Public Ministry prosecutor Deltan Dallagnol. The PF fulfilled eleven court orders in the operation that ended in three men and one woman detained in São Paulo. However, authorities did not confirm whether the detainees were linked to the investigation regarding Lava Jato’s leaks published by The Intercept Brasil.