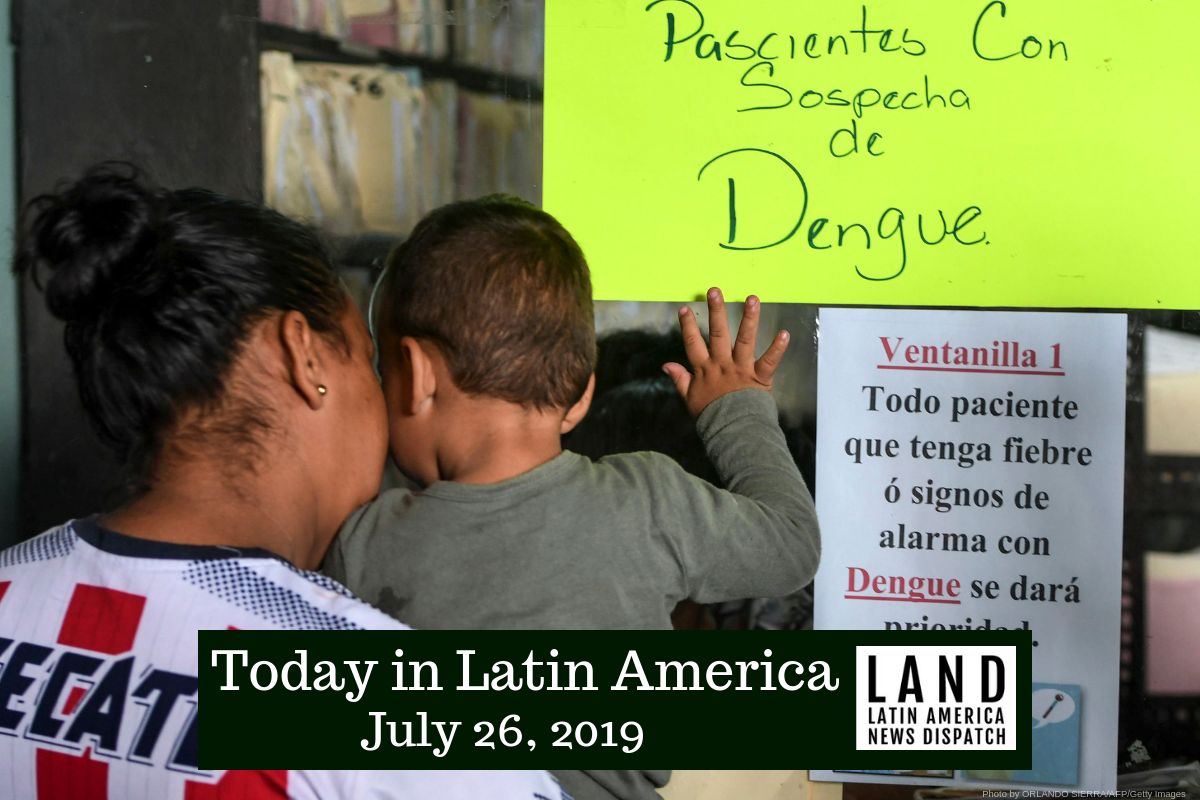 A woman looks for medical attention for her child, allegedly affected by dengue fever, at the Alonso Suazo Health Center in Tegucigalpa on July 22, 2019. (Photo by Orlando Sierra/AFP/Getty Images)

HONDURAS: Public health authorities have confirmed over 28,000 cases of dengue in what is now the worst outbreak in the last fifty years. The massive patient intake has “collapsed” 26 out of the 32 public hospitals around the country. Fifty-four deaths have been confirmed, with the majority being children, according to local press. On Monday, President Juan Orlando Hernández met in Tegucigalpa with mayors from all 298 municipalities to coordinate “a massive mobilization” to fumigate mosquito breeding grounds across Honduras. The national campaign begins tomorrow.

MEXICO: The National Human Rights Commission (CNDH) filed six criminal lawsuits against 119 federal and state security agents allegedly involved in the torture and disappearance of the 43 students in 2013. CNDH also filed complaints against 116 investigators believed to have participated in the mass kidnapping of students from the Ayotzinapa rural teachers’ college, where local police allegedly conducted in collusion with organized crime. After being elected, President Andrés Manuel López Obrador pledged justice for the victims’ families.

MEXICO: Prosecutors believe “international criminal groups” were involved in the assassination of two Israeli citizens at an upscale mall in Mexico City. Witnesses report a woman wearing a blonde wig disguise fatally shot Alon Azulay, 41, and Benjamin Yeshurun Sutchi, 44, at the Plaza Artz shopping center in Pedregal. According to the Israeli embassy, both victims had criminal records in Mexico and Israel. Police arrested the shooter, who said it was a crime of passion. She later admitted to the Mexican police of having coordinated the attacks with other unknown suspects.

UNITED STATES: A bipartisan bill granting Venezuelan refugees in the United States with temporary protected status (TPS) passed the House by a simple majority yesterday. Co-sponsored by Florida Reps. Mario Diaz-Balart (R-Miami) and Darren Soto (D-Kissimmee), the bill grants Venezuelans living in the U.S. with work authorization and the ability to travel abroad, as well as protecting them from deportation. The 272-158 vote followed Tuesday’s failed attempt at garnering a two-thirds majority. The TPS bill now heads to the Senate; if approved, the president will decide whether to sign it into law.

JAMAICA: Today, the University of West Indies (UWI) in Kingston will host a forum on sargassum, the foul-odored seaweed that has appeared in myriad Caribbean beaches in recent years. The Ministry of Tourism expects to foster a regional approach to managing and mitigating the large mounds of brownish seaweed that accumulates on the shore. Sargassum inhabits shallow and temperate waters around the tropics, stretching from West Africa to the Gulf of Mexico. Excessive amounts of sargassum have been reported at thirty-three coastal towns in Mexico, while Barbados declared the free-floating seaweed a national emergency in 2018.

GUATEMALA: According to NPR, President Donald Trump’s said he is evaluating whether to impose a “travel ban” against Guatemala after allegedly breaking a deal to become a ‘safe third-country.’  A White House official told NPR that “if Guatemala doesn’t take significant action to help protect our borders, then we will, of course, look at all manner of solutions to the serious crisis we face.” Any travel ban would rely on the same powers Trump used in Jan. 2017, when he ordered a travel ban on seven Muslim-majority nations. The Supreme Court upheld the heavily criticized policy on June 27, 2018, affirming the president’s broad power over immigration issues.

VENEZUELA: The U.S. Treasury has now sanctioned President Nicolás Maduro’s family members and cabinet officials for allegedly running a “food corruption network.” Alex Nain Saab Morán, a Colombian national, ran the scheme by paying bribes and kickbacks to government officials to win contracts to import food ration boxes intended to feed the country’s starving population through the Local Committees for Supply and Production (CLAP) programs. Saab Morán “reaped substantial profits and imported only a fraction of the food,” according to the official statement. Maduro’s three stepsons and six others are also affected by the sanctions.

ARGENTINA: Luna Park, one of the most famous entertainment venues in Buenos Aires, has been put up for sale. The site, which is considered a National Historic Monument, has attracted the interest of a European real estate group, who reportedly plans to build an office complex after purchasing it for $40 million. Founded in 1932, Luna Park holds an important place in Argentinean popular culture: it is the place where the burial of tango legend Carlos Gardel took place in 1935; where Juan Domingo Perón met Eva Duarte in 1944; and where Diego Maradona celebrated his wedding reception in 1989.

CHILE: Yesterday, five people were injured after a bomb went off at a police station in Santiago. President Sebastián Piñera called the incident a “terrorist attack” and said that we would press charges against the people behind the attack by invoking the Antiterrorism Law. Piñera confirmed that a second package, whose intended recipient was former Interior Minister Rodrigo Hinzpeter, was intercepted by Chilean police yesterday.

BRAZIL: Amid the fallout of the leaked messages from The Intercept depicted prosecutorial bias in the Lava Jato trial, President Jair Bolsonaro said that his phones have also been hacked In a tweet, Bolsonaro noted he received the information from the Justice Ministry.

On Wednesday, the Federal Police arrested four people accused of having hacked the phones of Economy Minister Paulo Guedes, Justice Minister Sérgio Moro, and Federal Public Ministry prosecutor Deltan Dallagnol. Now, a federal forensic analysis calculates that around “a thousand phones” might have been targeted in the cyberattack on government officials.