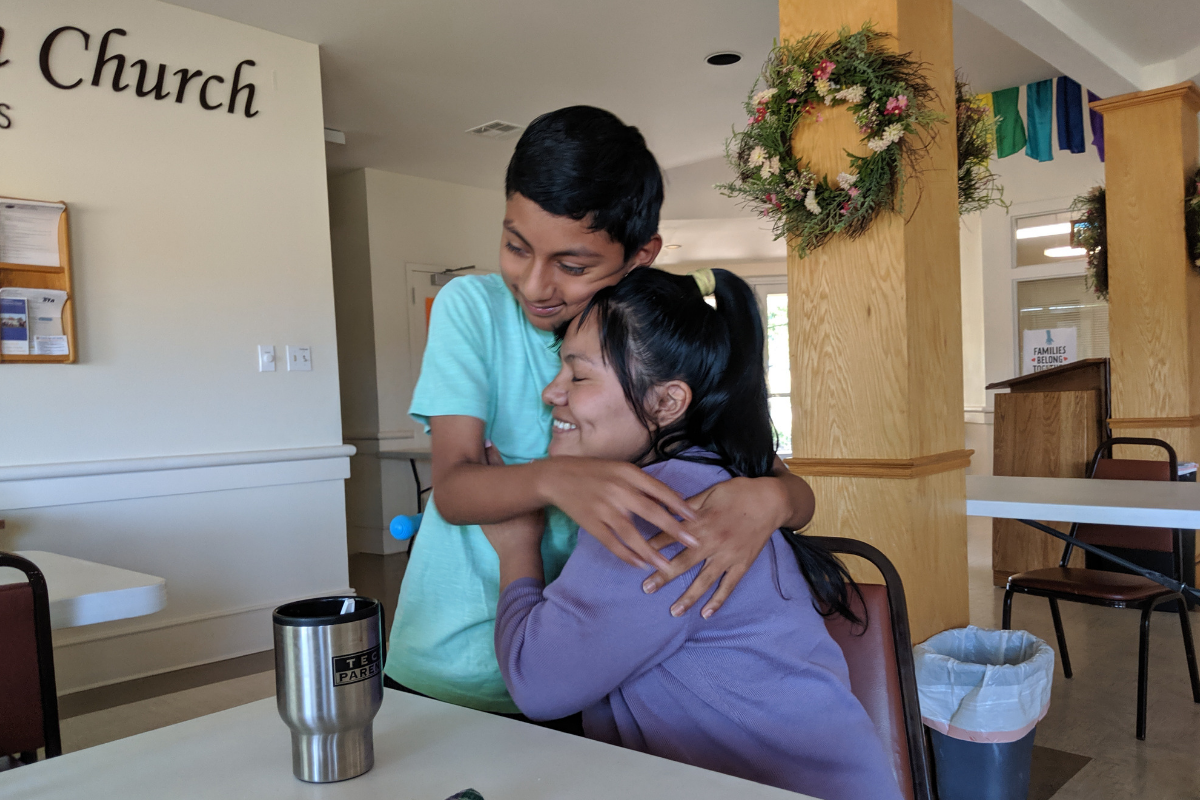 Hilda Ramirez and her son. (Photo courtesy of Christine Bolaños)

AUSTIN, TX — Hilda Ramirez walks out of her small makeshift bedroom at St. Andrew’s Presbyterian Church with a nervous smile. Her vibrant dress and lilac sweater compliment her jet-black hair and deep brown eyes. She cracks a smile as her 13-year-old son Ivan runs in front of her eager to start a media interview. The petite Guatemalan immigrant’s soft demeanor is in direct contrast to her son’s more outgoing personality.

Ramirez receives a compliment on her freshly painted lilac nails which she says Ivan promptly messed up.

“She said she didn’t like them anyway,” Ivan mischievously grins. “That’s not true. I said I chipped one of them,” Ramirez jokingly replies. They playfully banter and for a moment they seem to forget they’ve been forced to seek sanctuary at the Austin, Texas church for nearly three-and-a-half years—now they’re also facing increasing hefty fines.

The Guatemalan refugees left their home country amid death threats and domestic violence they endured in 2014. They spent 11 months in the for-profit Karnes County Residential Center in southeast Texas where Ramirez said she endured mistreatment from staff. Her request for asylum was denied in 2015 and then her attempt to get a deferred-action extension on her deportation was rejected in March of this year without explanation. Now, she’s looking at a $303,620 fine from U.S. Immigration and Customs Enforcement (ICE) for “willfully” failing to deport.

In a letter she received in June, ICE claims she is living at the church to evade arrest. She is accused of having “connived or conspired” to prevent her deportation.

She and her allies are convinced this is retaliation against her immigrant rights activism.

Representatives from Austin Sanctuary Network, a faith-based coalition that supports immigrants, of which St. Andrew’s is a member, believe women living in sanctuary who have spoken out against the injustices they’ve endured and have raised awareness about the need for immigration reform, are particularly susceptible.

In a press release sent to Latino USA, Edith Espinal, an Ohio mother living in a sanctuary who is also facing a fine said: “In Columbus, I am still waiting for my representative to visit me at the church. For two years I’ve been requesting a meeting, I just feel like we are not a priority.”

Ramirez, Espinal and countless other migrants across the country, are facing hefty civil fines that total $799 per day. While this fee has technically been lawful since the McCarthy era, immigrant allies believe it’s the first time the measure has actually been implemented.

One migrant is facing a fine of $497,777. These fines compelled immigrant allies to travel to Washington, D.C. in late July to put pressure on members of Congress to take action and champion their cause.

“I’ve been practicing immigration law for 10 years and I’ve never seen anybody fined before, and certainly not to this level,” Ramirez’s attorney, Stephanie Taylor, told The Austin Chronicle. “It’s clear the government is trying to terrorize Hilda.”

Peggy Morton, a member of the Austin Sanctuary Network, said the community will continue to back Ramirez.

“She and her son aren’t a threat to our country. If anything, people like her enrich our lives,” Morton told Latino USA.

But Morton worries the Ramirez family may ultimately be deported and that sanctuary churches such as St. Andrew’s may face fines of their own.

Despite the numerous hurdles, Ramirez remains optimistic about her asylum case.

“Immigration is trying to torment us by hitting us hard with this fee, but it’s not going to bring us down,” she remarked. “If anything, this ordeal, and support from the church and the community, gives me the strength to carry on.”

Ramirez uses thread a relative sends her from Guatemala to make small and vibrant dolls that remind her of the women in her indigenous Mam village. Morton describes Ramirez as a hard worker who quickly learned Spanish because she was not provided a language interpreter during her first court case.

Ramirez believes her suffering will pay off by one day giving her son the opportunity for a better future in the U.S. This belief allows her to remain positive. Still, isolation does take a toll on her. She says there are times when it’s hard to get out of bed. Other times, it’s hard to sleep. Her overwhelming sadness and stress manifest into nightmares that wake her up and force her to emotionally eat. She feels guilty about it the next day.

“You say you’ll exercise but then you don’t,” her concerned son says. “I know, but I don’t feel motivated,” Ramirez replies.

Every so often, she says she’ll walk up and down the stairs that connect the spacious auditorium to the second floor of St. Andrew’s. Mostly, she distracts herself with crafts and by watching television.

By contrast, Ivan spends virtually all of his free time playing soccer. He also gets to attend public school while it’s in session. He’ll enter sixth grade in the fall.

Children come to visit and play with him occasionally. One of his favorite times of the day is morning breakfast in their small makeshift kitchen. His mom usually cooks eggs with cheese or quesadilla style. But boxed macaroni and cheese is pretty high up on his list of favorite foods.

Ramirez shares a bunk bed with her son. They have a small television, a couch and a table for the two of them. The room has a window that’s covered up by a curtain most of the time. Ramirez said it’s too risky to crack it open. Every now and then, they make an exception and take a peek outside for just a moment.

“There are times when I’m desperate to take a walk outside. I feel like I’m suffocating,” she says.

Their room is their sanctuary within a sanctuary. A place reserved only for the two of them.

At one moment, Ivan runs into the room and comes back out with a scooter. He explains that back in 2016, he and his mother would go to the local grocery store and bring back the food on the scooter. He recalls one time at a pedestrian stop sign where an angry driver got out of his car to spit on their faces and tell them to go back home.

“We just wiped our faces clean and carried on,” Ivan said, matter-of-factly.

He explained that he’s not resentful of his current situation. He just wishes people understood that he and his mother don’t mean others any harm. That they just want the freedom to live their lives outside of the four walls they’re confined to.

“I’d tell [President Trump] that we’re not bad people. That he’d probably do the same thing if he were in our shoes,” Ivan says.

Note: Some portions of this story have been translated from Spanish to English.