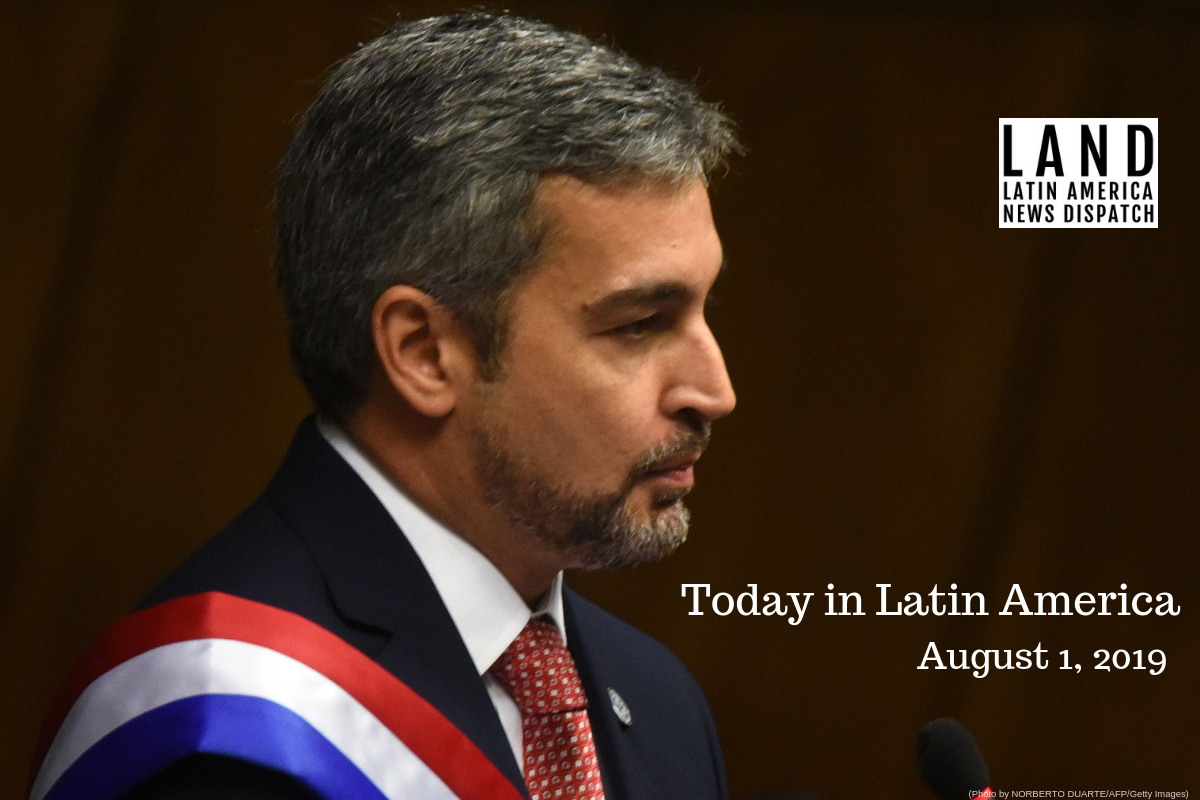 PARAGUAY: A group of legislators has called a vote in today’s Congress session to decide whether to impeach President Mario Abdo Benítez and Vice-president Hugo Velásquez following a secret energy deal with Brazil that surfaced this week. On Tuesday, Foreign Minister Luis Alberto Castiglioni and three other high-profile government officers resigned after revealing that Paraguay would be contracting a higher voltage from the Itaipu plant —a massive hydroelectric straddled between both country’s borders— costing the government around $200 million. Critics believe that the contract amounts to treason. The vote needs a two-thirds majority (53 out of 80 votes) to initiate the removal process.

MEXICO: The national growth domestic product (GDP) reportedly grew by 0.1 percent in the second quarter of the year. Since the Mexican economy narrowly avoided going into recession, economists believe that a rate cut will come after August. President Andrés Manuel Lopez Obrador called the growth data from the first half of the year “very good news.” A new budget, set to be presented on September 1, will include “no new taxes” according to the president.

MEXICO: Research published by the Royal Society Open Science estimates that there are fewer than 19 vaquita porpoises remain alive, with some believing that the number is as low as six marine mammals. The small-toothed whale, an endemic species mostly inhabiting the zone north of the Gulf of California in México, has experienced a 98.6 percent decline in population since data began to be collected in 2016. In the article, scientists point that cracking down on illegal gillnets —vertical fishing nets that catch by entangling the vaquita— could help preserve the critically-endangered porpoise.

MEXICO: In a departure from traditional military codes in the country, Mexican Army recruits will be allowed to have tattoos. Renovated for the first time since 2015, the new rules say that the draftee can have tattoos as long as they are smaller than 10 square centimeters (4 inches). Tattoos cannot be seen when wearing the uniform and cannot be offensive, lewd, or “promote criminality.” Perforations remain prohibited for men, while only “normal” earrings are accepted for women.

PUERTO RICO: Outgoing Governor Ricardo Rosselló has chosen Representative Pedro Pierluisi as his successor, swearing him in as Secretary of State, a position that puts him in line to become assume the role of governor tomorrow. However, his appointment clashes with other Puerto Rican political leaders seeking the office of governor. Legislators have proposed naming Thomas Rivera Schatz, Senate President who declared his intention to run for office in 2020, as a more “suitable” option for the role.

HAITI: Yesterday, anti-corruption protesters demanded that the United States stops supporting Haiti’s embattled president, Jovenel Moïse. Demonstrators gathered in front of the U.S. Embassy in Port-au-Prince said that the Trump administration had provided a lifeline to “dictator” and “thief” Moïse, urging Washington to judge the Haitian leaders for his alleged crimes. Voice of America-Creole reports that Haitians have congregated in front of the massive security complex since July 25, growing larger by the day.

GUATEMALA: Acting Director of the Department of Homeland Security, Kevin McAleenan, traveled to Guatemala City yesterday to meet with lawmakers over the impending migratory pact that would force asylum seekers to file claims in the Central American country. Guatemala’s shortcomings on security and infrastructure have prompted concern among citizens, many of whom protested yesterday outside the halls of Congress and the presidential palace. McAleenan, who will meet with the presidential candidates Sandra Torres and Alejandro Giammattei, said that he does not consider Guatemala an “unsafe country” despite its high violence indicators.

NICARAGUA: The opposition excoriated the government for failing to show up at yesterday’s peace negotiations in Managua, accusing President Daniel Ortega of intransigence. Nicaragua’s Civic Alliance said that Ortega and his cabinet “failed to show the minimum amount of decency” for not even sending a written statement about their unannounced absence. The Organization of American States, mediatingthe conflict resolution talks since May, gave both parties a period of 75 days to arrive at a consensus in July. The dialogue has been delayed since then.

PERU: Archeologists found an “extremely rare” hamster-sized monkey fossil in the Peruvian Amazon. Back in 2016, a team of Peruvian and American scientists found the 18-million-year tooth on the riverbed of the Río Alto de Madre de Dios in the south of the country. Their findings were recently published in the Journal of Human Evolution, where researchers note how the specimen, named Parvimico materdei, could shed light on the evolution of the monkey.

CHILE: A devastating 400-page report confirmed that a famed Jesuit priest abused 22 women between 1960 and 2008, with four of the victims being underage. The six-month investigation showed how now-deceased priest Renato Poblete “repeatedly, severely and systematically abused” the women in his congregation. Six months before his death in Oct. 2010, then-president Michelle Bachelet granted Poblete the Bicentennial Award, the highest order of merit in Chile. After the list of scandals grew worldwide, the Catholic Church convened a summit to prevent more abuses from the priesthood on Feb. 2019.