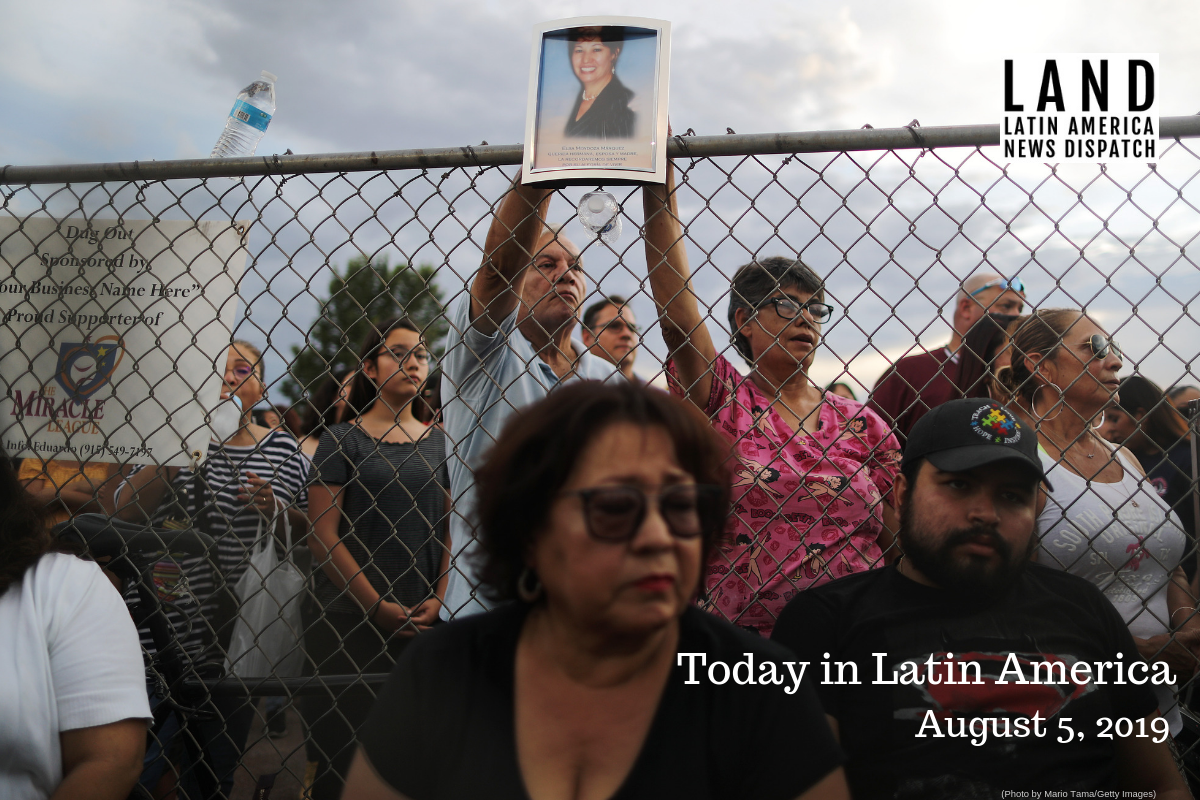 A photo (top) of Elsa Mendoza Marquez, a Mexican schoolteacher from Ciudad Juarez who was killed in the shooting, is held up during an interfaith vigil for victims of a mass shooting, which left at least 20 people dead, on August 4, 2019 in El Paso, Texas. (Photo by Mario Tama/Getty Images)

UNITED STATES: President Andrés Manuel López Obrador said six Mexicans were among the casualties in El Paso and that seven others were injured. Foreign Minister Marcelo Ebrard called the events “an act of barbarism,” vowing to take legal action against the U.S. for “failing to protect Mexican nationals.

In 13 hours, two mass shootings left at least 29 dead and over fifty injuries in two American cities. On Saturday morning, a total of 20 people were killed by a 21-year-old white man who opened fire at Walmart in El Paso, Texas, a majority-Hispanic border city. Victims’ age ranged from 2 to 82. On Sunday, in Dayton, Ohio, a 24-year-old white man set out on a street rampage that claimed nine lives, including that of his sister. Police responded in less than a minute, shooting the gunman to death. Of the 27 people who were injured, 15 have been discharged from the hospital. The gunman’s motives remain unknown.

President Donald Trump, who expressed his condolences via social media hours after the attacks, has been criticized for fueling hate for his divisive rhetoric online and at campaign rallies.

U.S.-MEXICO BORDER: Unaccompanied minors are no longer being held at the controversial detention facility in Homestead, Florida, the Department of Health and Human Services (HHS) reported on Saturday. With a maximum holding capacity of 14,300 people, the detention center is the largest facility for migrant children in the country since its activation in March 2018. HHS said that children had either been paired with a sponsor or sent to one of the 168 facilities throughout the U.S. Homestead will remain open, reducing bed capacity from 2,700 beds to 1,200. The HHS facility faced a lot of criticism after being likened to a “prison” by politicians who visited the facilities.

REGION: Greenland’s ice sheet poured over 197 billion tons of water into the North Atlantic in July alone. The record-breaking heatwave experienced by Europe last week moved to the semi-autonomous Danish territory, producing an estimated ice loss of 11 billion U.S. tons just on July 31, equivalent to about 400,000 Olympic-sized swimming pools according to the Danish meteorological institute. The damage is 36 percent bigger than the scientists initially predicted for an average year.

PUERTO RICO: Puerto Ricans have begun to question the legitimacy of incoming governor Pedro Pierluisi. Some critics, like San Juan Mayor Carmen Yulín Cruz, argue that the appointment of the veteran politician is unconstitutional. Mayor Cruz will present a lawsuit against Pierluisi’s confirmation this morning, according to CNN. Others believe Pierluisi represents “the establishment,” as he served as a lawyer for Puerto Rico’s Financial Oversight and Management Board in the past. Today, the island’s Senate will seek to ratify Pierluisi as the new governor of Puerto Rico.

EL SALVADOR: President Nayib Bukele celebrated July 31 as the country’s first day without a registered murder in two years. Bukele expressed his satisfaction via Twitter, an activity that has become customary for the newly-inaugurated president, who attributes the decrease in homicides to his “territorial control plan” against organized crime.

A Salvadoran criminologist indicated that only nine murder-free days had been recorded in the Central American nation since 2000, including one day in 2017, one in 2015, one in 2013, and two in 2012.

HONDURAS: New York’s District Court accused President Juan Orlando Hernández of using $1.5 million in drug-trafficking proceeds to secure his presidential bid in 2013. Attorneys presented the 49-page document, where the president is identified as a “co-conspirator,” as part of pre-trial documents in an ongoing case against his brother, Antonio Hernández, who was arrested in Miami for cocaine-smuggling charges in 2018. The reports note that the current president established connections with drug cartels in Honduras and Colombia; upon acquiring the funds, then-candidate Hernández bribed local politicians to secure a vote in his favor.

COLOMBIA: The United Nations reported a slight decrease in coca production, dropping about 1.2 percent in 2018. The number of hectares planted experienced a reduction from 171,000 to 169,000 at the end of 2018, which has led officials in President Iván Duque’s administration to believe that a tendency of lowering the crop yield has been established. However, Colombian media reports that “the potential for growing coca” has expanded in the last year. The U.N. also announced that Colombia remains the top producer of coca leaf in the world, with Nariño being the most “affected” department within the country.

ARGENTINA: About 20 students from the Antonio Próvolo Institute for Deaf and Hearing Impaired Children claim to have been sexually abused by priests between 2006 and 2014. Complaints against the Próvolo Institute, located in the Mendoza province, arose in 2016 and intensified after Italian authorities revealed that Rev. Nicola Corradi had already been accused of committing similar crimes in Verona. The trial against the three alleged abusers, which is the most prominent case against the Catholic Church in Argentina, begins today.

BRAZIL: The director of an agency that monitors deforestation in the Amazon has been fired after a public face-off with President Jair Bolsonaro, who questioned the validity of satellite images of the logging in the rainforest. Physicist Ricardo Galvão announced his own ousting as director of the National Institute for Space Research (INPE) on Friday, saying that the altercation with Bolsonaro had made the situation “unsustainable.” Bolsonaro called INPE’s findings “lies” and noted that they were harmful to Brazil’s ongoing trade negotiations with international actors.