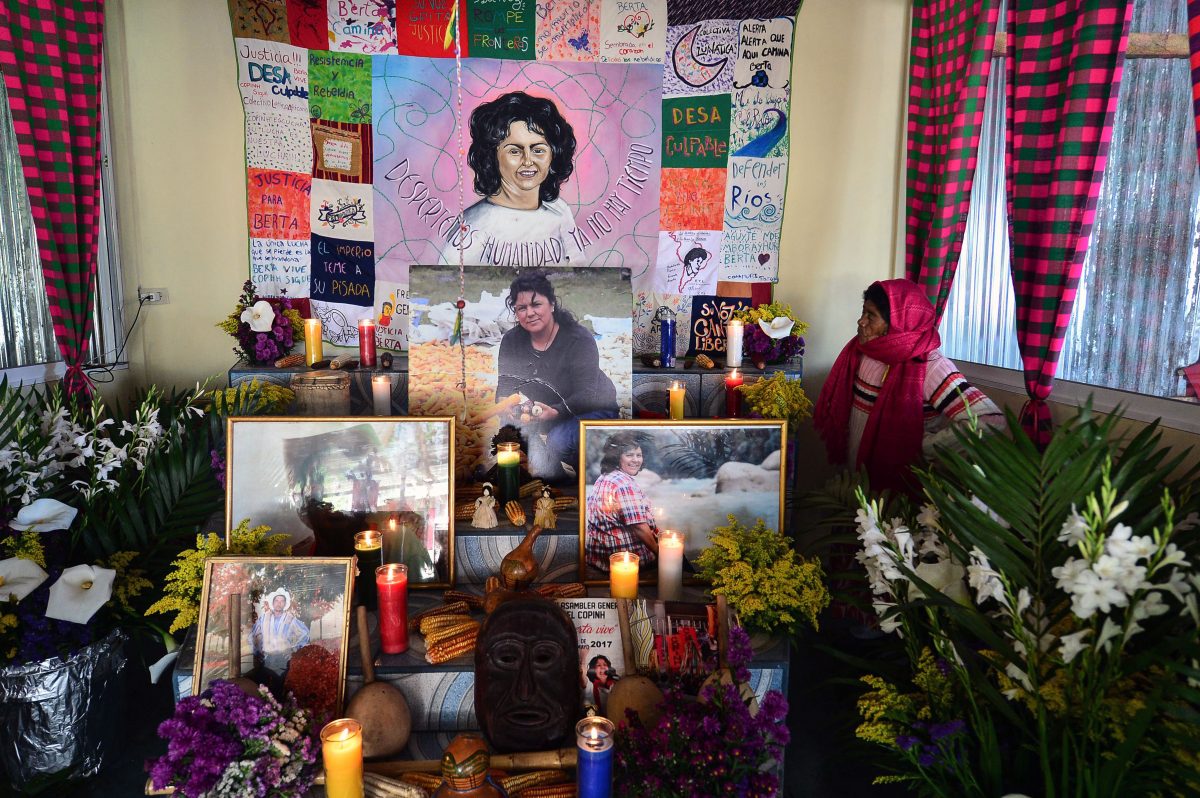 Honduran indigenous woman Pascuala Vasquez stands before an altar in honor of late Honduran environmentalist Berta Cáceres, on the eve of the third anniversary of her murder in La Esperanza, 110 kilometers east of Tegucigalpa, on March 02, 2019. (Photo by Orlando Sierra/AFP/Getty Images)

According to records compiled by the campaign group Global Witness, 1,738 people described as environmental defenders were killed between 2002 and 2018, across 50 countries.

Although the figure is slightly down on that for 2017, the group says the number of reported deaths has been increasing over time with about three people killed each week on average.

Yet the campaign group says only about 10 percent of these killings from 2002-2013 resulted in a conviction, compared with about 43 percent on average for global homicide convictions in 2013.

In a study of the group’s data from 2002-2017, published today in Nature Sustainability, we found many of the deaths related to conflict over natural resources, including fossil fuels, timber and water. All but three of the countries where deaths were recorded are classed as highly corrupt, according to their Corruption Perceptions Index score.

The term environmental defenders can include anyone involved in protecting land, forests, water and other natural resources.

Environmental defenders can be community activists, Indigenous peoples, lawyers, journalists or non-governmental organisation (NGO) staff. They are defined not by job title or political identity, but by their struggles to protect the environment or land rights. Many are part of collective struggles: they do not act alone.

One of the most well-known murdered defenders is Chico Mendes, a Brazilian rubber tapper, union leader and environmentalist. He was killed in 1988 for his work protecting the Amazon and advocating for the rights of local people.

More recently, in another corner of the Brazilian Amazon, José Claudio Ribeiro and Maria do Espirito Santo were killed in 2011 for defending their forests against illegal loggers.

In Cambodia, Chut Wutty, director of the Natural Resource Protection Group and a critic of military and government corruption in illegal logging, was shot and killed in 2012.

Berta Cáceres was murdered in 2016 for her fight against a dam that encroached on the water and land rights of the Lenca people of Honduras. Her death led to international movements calling for justice.

While some of the killings have sparked international outcry, others led to much more localized repercussions. Still, others remain unreported and are not accounted for in the Global Witness database.

A Conflict Of Interest

Conflicts over natural resources are often the underlying cause of the violence against environmental defenders. They are linked to different resources and sectors, such as fossil fuels, minerals, agriculture, aquaculture, timber and to the land or water from where these resources can be extracted.

We can see these conflicts as the continuation of historical colonial land use and appropriation. Today, the environmental footprint arising from the resource consumption of high-income countries is effectively outsourced to less wealthy nations and regions.

This is where raw materials are sourced in a country separate to where the resulting product or service is consumed.

Resource extraction is often carried out by companies or groups without legitimate rights to that resource. Examples include illegal logging in community forests. There is also the consumption of water from rivers that traditionally supplied villages or towns, for example, foreign mining companies in Bolivia.

While some of these natural resource drivers are local or national, in many cases it is multinational companies that are directly outsourcing their resource needs that play a role in violence against environmental defenders.

But who is actually doing the killing?

Violence against defenders may be carried out by those representing their own interests, such as illegal loggers or miners, or on behalf of government interests.

In our study, we found weak rule of law and corruption in a country is closely correlated with environmental defender deaths.

We also found that indigenous people represent a disproportionate percentage of the defenders who are killed. About 40 percent of deaths recorded in 2015 and 2016, and about 30 percent in 2017, were indigenous people.

Indigenous people manage or have tenure over about a quarter of the world’s surface (about 38 million square kilometres). Conflict over natural resources is often related to a lack of recognition or acknowledgment of these rights.

A well-known recent example in the United States, Standing Rock involved resistance of the Sioux tribe, and allies, to the North Dakota Access Pipe Line. The aggressive response of the authorities, lead to the hospitalization of many demonstrators.

We believe companies that profit from natural resources extracted under conditions that disregard the rights of environmental defenders are complicit in driving violence through their supply chains. They have a responsibility to act ethically.

There is an urgent need for a global perspective on natural resource conflicts. What is currently happening, in terms of the displacement of environmental and social damage, is a result of globalization, and is increasing with trade and consumption.

The voices of those trying to defend the environment are being silenced. Low conviction rates show few people are being held accountable for these killings. This cycle of violence and impunity affects entire communities, creating a climate of fear. Despite their fear, many continue to fight for social and environmental justice.