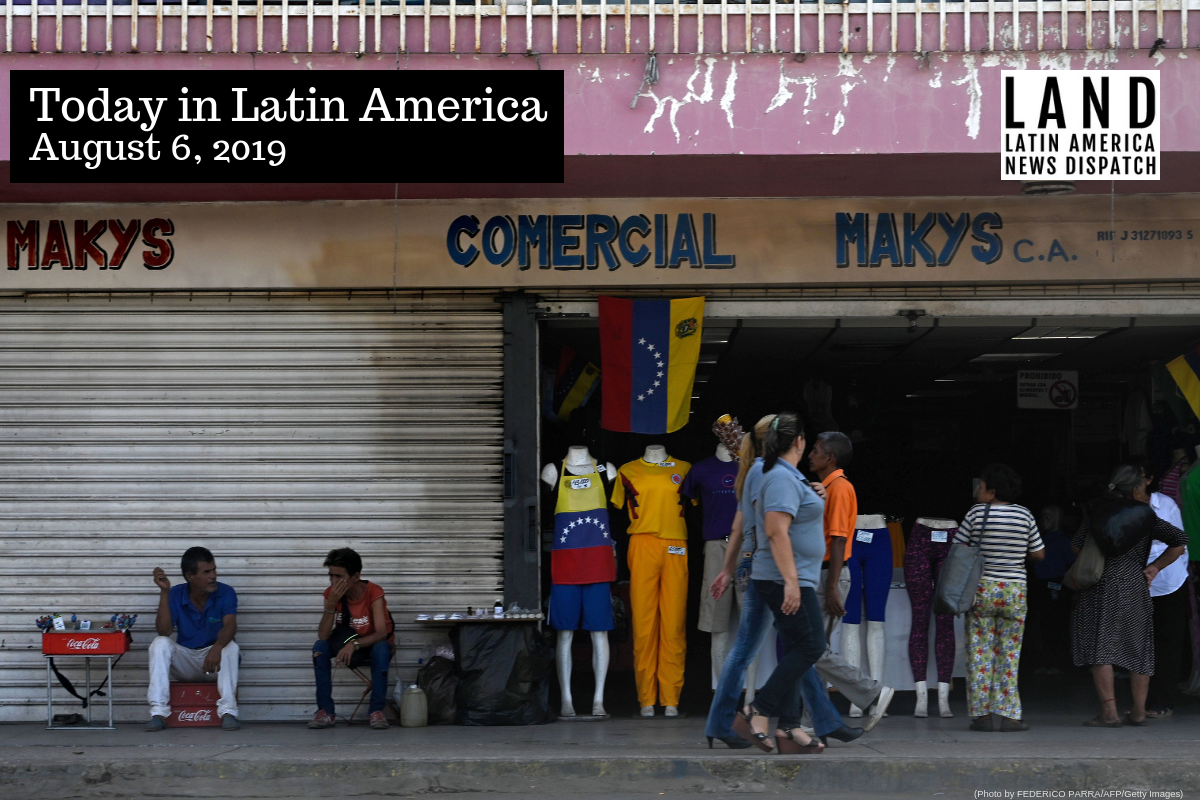 Street vendors sell products on the sidewalk outside a closed shop in Maracaibo, Zulia State, Venezuela, on July 23, 2019 (Photo by Federico Parra/AFP/Getty Images)

VENEZUELA: Today, the Trump administration is expected to announce “a total economic embargo” on Venezuela. With an executive order, the U.S. government has frozen all economic assets belonging to President Nicolás Maduro and his associates, noting that these cannot be “transferred, paid, exported, or withdrawn.” The escalation of tensions is Washington’s latest push to force Maduro out of power. Venezuela joins Cuba, Iran, Syria, and North Korea as being economically isolated from the United States.

UNITED STATES: Lewis Ziska, a top climate scientist, resigned from his post at the U.S. Department of Agriculture (USDA) after accusing the Trump administration of questioning and trying to minimize the findings of his research. The 62-year-old plant physiologist with two decades of experience at the USDA said that department officials tried to bury his study about how rice is losing nutrients because of rising levels of carbon dioxide in the atmosphere. In an interview with Politico, Ziska said that science has “become politicized” under the Trump administration.

REGION: According to environmental watchdog Global Witness, 2018 registered the deaths of 164 environmental defenders trying to protect their lands around the world. In its annual survey, Global Witness notes that Guatemala experienced the most significant increase in murders last year: from 3 in 2017 to 16 in 2018. Phillippines leads the list as the deadliest country for environmental activists, with 30 deaths registered in 2018. Other Latin American countries featured in the list include Colombia (24), Brazil (20), Honduras (4), Venezuela (3), and Chile (1).

PUERTO RICO: The Puerto Rican Senate has decided to leave Pedro Pierluisi’s ratification as governor in the hands of the island’s Supreme Court. Senate President Thomas Rivera Schatz filed a lawsuit that seeks to oust the lawmaker who was sworn in last Friday. Noting that no extensions will be awarded, the Court gave all parties involved until noon today to file all necessary documents. It remains unclear how quickly the Court deliberate since there is no deadline for the tribunal to make a decision.

COLOMBIA: Colombia will grant citizenship to an estimated 24,000 children born to Venezuelan mothers in the country, who have been stuck in legal limbo since 2015. President Iván Duque signed the resolution yesterday and gained praise from the United Nations, who called the initiative “a breakthrough in the guarantee of children’s rights.” The Duque administration called the measure “urgent, temporary, and exceptional” and gave it a two-year validity. More than 1.4 million Venezuelans are residing in Colombia, with 47 percent of them lacking any legal status according to the country’s immigration agency.

BOLIVIA: On Sunday, a road traffic accident in Charazani, 155 miles (250 km) north of La Paz, left 14 people dead and 21 injured when a bus fell into a ravine. The 14 victims are physicians who were volunteering in Bolivia with the MedFund foundation, a medical nonprofit based in La Paz. Members of the MedFund medical mission were planning to provide health services to residents of four rural communities near Sorata from August 5 to 11.

PERU: On Sunday, President Martín Vizcarra ordered the army to protect a strategic port from a group of protesters who are refusing the inauguration of the $1.4-billion Tia María mining concession. Demonstrators have launched “an indefinite strike” against a massive mining project operated by Southern Copper Corp and located in the southwestern province of Islay. Social organizations who oppose Tía María say that the mine will pollute local water sources and interfere with regional farming.

ARGENTINA: A judge ruling suspended the operations of three delivery apps until they implement minimum security precautions for delivery drivers. A sentence demands Glovo, PedidosYa, and Rappi to consider their hundreds of employees as part of their workforce instead of only as “collaborators.” The ruling is widely seen as providing protections for workers since it obliges the companies to provide them with work materials, health coverage, and accident insurance. The judge also requested credit card companies to block any order that is made in these digital platforms.

BRAZIL: Yesterday, Victoria Sampaio officially became the first transgender Victoria’s Secret model. The 22-year-old Brazilian model and actress will do work for the VS Pink line, the company’s athletic line, in a campaign that will be launched later this month. Sampaio made history when Vogue Paris featured her on the cover of its March 2017 issue, becoming the first transgender model to do grace the front page of said publication. Her agent said that “she expects to contribute to a bigger representation for everybody” in the fashion business.

REGION: Following two mass shootings that left at least 31 dead in two American cities, the governments of Uruguay and Venezuela issued travel warnings to the United States. Uruguay warned of “the indiscriminate possession of firearms by the population” in the United States, “which has cost the lives of 250 people in the first seven months of the year.”

The Venezuelan government followed Uruguay’s lead, warning citizens to be careful while traveling to the United States. Foreign Minister Jorge Arreaza said that the string of crimes owes its roots to “a supremacist elite that holds power in Washington.”