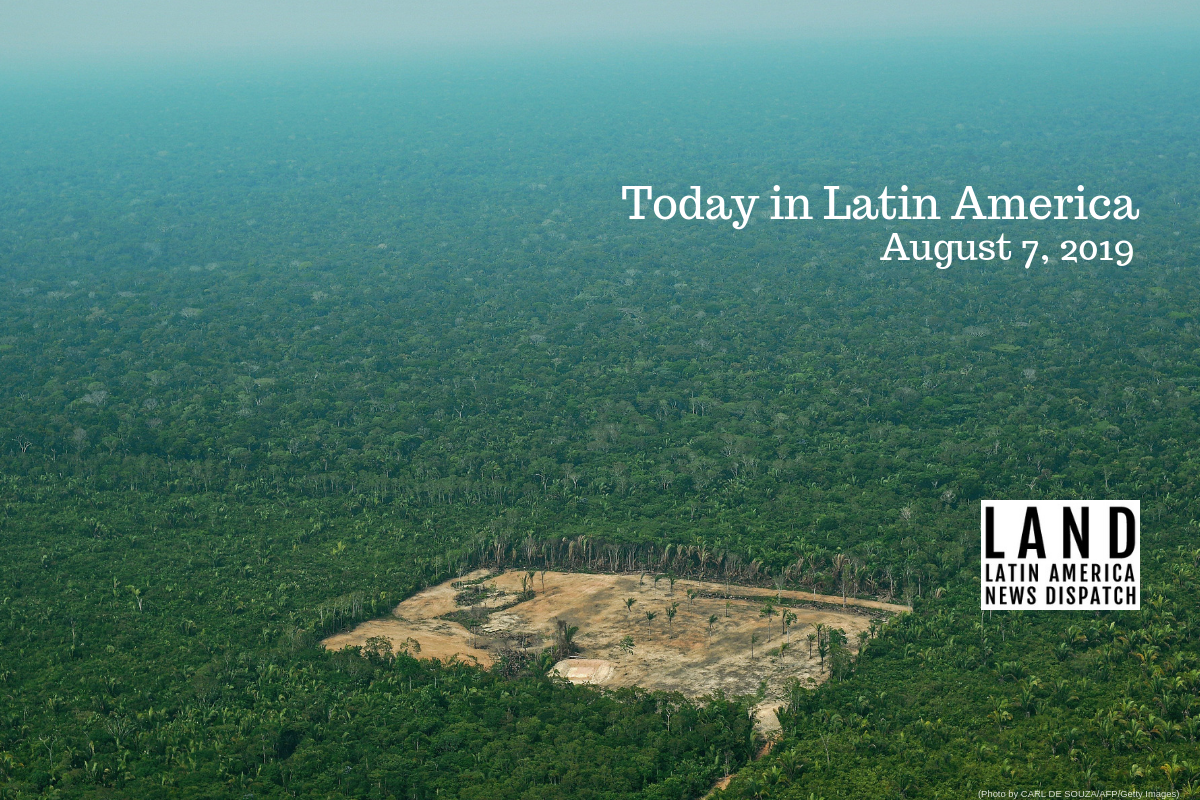 Aerial view of deforestation in the Western Amazon region of Brazil on September 22, 2017. (Photo by Carl De Souza/AFP/Getty Images)

BRAZIL: In comparison to July 2018, deforestation in the Amazon this past month grew by 278 percent, according to a study published by the National Institute for Space Research (Inpe). Inpe showed satellite images to demonstrate how the rainforest lost 2,254 square kilometers (870 square miles) of vegetation in July, which is between three and five times the surfaces lost the same month in the past four years. Experts anticipate that the sharp rise of logging, both contracted and illegal, will accelerate under President Jair Bolsonaro, a climate change skeptic who has a robust agribusiness agenda.

MEXICO: Armed robbers broke into Mexico’s mint and looted $2.5 million worth in gold coins. According to security officials, the daylight break-in took place when three gunmen disarmed security guards and raided the Casa de la Moneda in Mexico City, gaining access to a vault that was allegedly left open. Upon gaining access to the depository, the robbers filled their backpacks with 1,567 gold coins, according to public security authorities, who also claimed to have footage of the incident and vowed to hunt down the suspects.

UNITED STATES: Yesterday, during an international summit held in Lima aimed at breaking the political stalemate in Venezuela, the Trump administration warned nations not to bypass their economic embargo on the Maduro regime. U.S. National Security Advisor John Bolton. “There’s no need to risk your business interests in the U.S. for the purposes of profiting from a corrupt and dying government.” The warning seemed mainly aimed towards Russia and China, who continue to purchase oil from the “criminal regime” in Venezuela, as Bolton called the government in Caracas.

HAITI: Pressure against President Jovenel Moïse mounts as the Lower Chamber of Deputies will hold impeachment hearing today. Gary Bodeau, Speaker of the Chamber of Deputies, said yesterday that the motion for the indictment for “high treason” will be placed on the agenda of the first plenary session. The 119-member legislature will need 80 votes for removal processes to begin. Although the passing seems unlikely, the motion’s rejection could fuel more civil unrest and further delay the ratification of a new government.

GUATEMALA: Rural leaders have launched a wave of protests across the country, erecting roadblocks in 22 parts of Guatemala. Thousands of farmers and peasants from the Farmer Development Committee (CODECA) are participating in the national strike, which rejects the controversial immigration agreement recently signed by the Guatemalan government with the United States. CODECA is also asking for the annulment of the June 16 general elections as they consider them to have been “fraudulent.”

EL SALVADOR: A spokesperson from the Attorney General’s Office said that last Saturday, the vocalist of the Salvadoran heavy metal band Apes of God, César Canales, was killed onstage while he performed in eastern El Salvador. The assassination reportedly took place after the singer had a “disagreement” with one of the attendees at a music festival in the municipality of Armenia. The perpetrator left the venue and returned with a gun, with which he murdered 27-year-old Canales.

VENEZUELA: U.N. Ambassador Samuel Moncada has called the United States’ Cuba-style embargo “a way of trying to fabricate a war” in Venezuela. Moncada also accused the Trump administration of “sabotaging” the talks between the government and the opposition, a remark that was echoed by Venezuelan Vice President Decly Rodríguez yesterday.  Several experts have pointed out that the economic embargo “will not work” as it might “make things worse” in the near future, like exacerbating cash shortages across the country.

ECUADOR: An explosion at a gold mine left four people dead in the southernmost province of El Oro. Local media reports thirteen homes near the area suffered structural damage, although no injuries were reported among the neighbors of Zuruama, a village located 115 mi (185 km) east of the Peruvian border. Market-friendly President Lenín Moreno is seeking to boost Ecuador’s mining capacities despite the opposition he has faced from residents, who are concerned about the environmental impact the extractive practice will have on their communities as well as the dangers of working in such industry.

BRAZIL: Yesterday, prison authorities reported the death of the drug-dealer who attempted to escape by dressing up as his daughter over the weekend. Officials say that Clauvino da Silva hanged himself in his cell, just two days after he impersonated his 19-year-old daughter in an elaborate attempt to flee from a maximum-security prison in Rio de Janeiro. On Sunday, the 42-year-old inmate donned a black wig, a female silicone mask, jeans, and a pink t-shirt as he tried to leave the penitentiary, but guards ultimately caught da Silva for his nervous disposition.