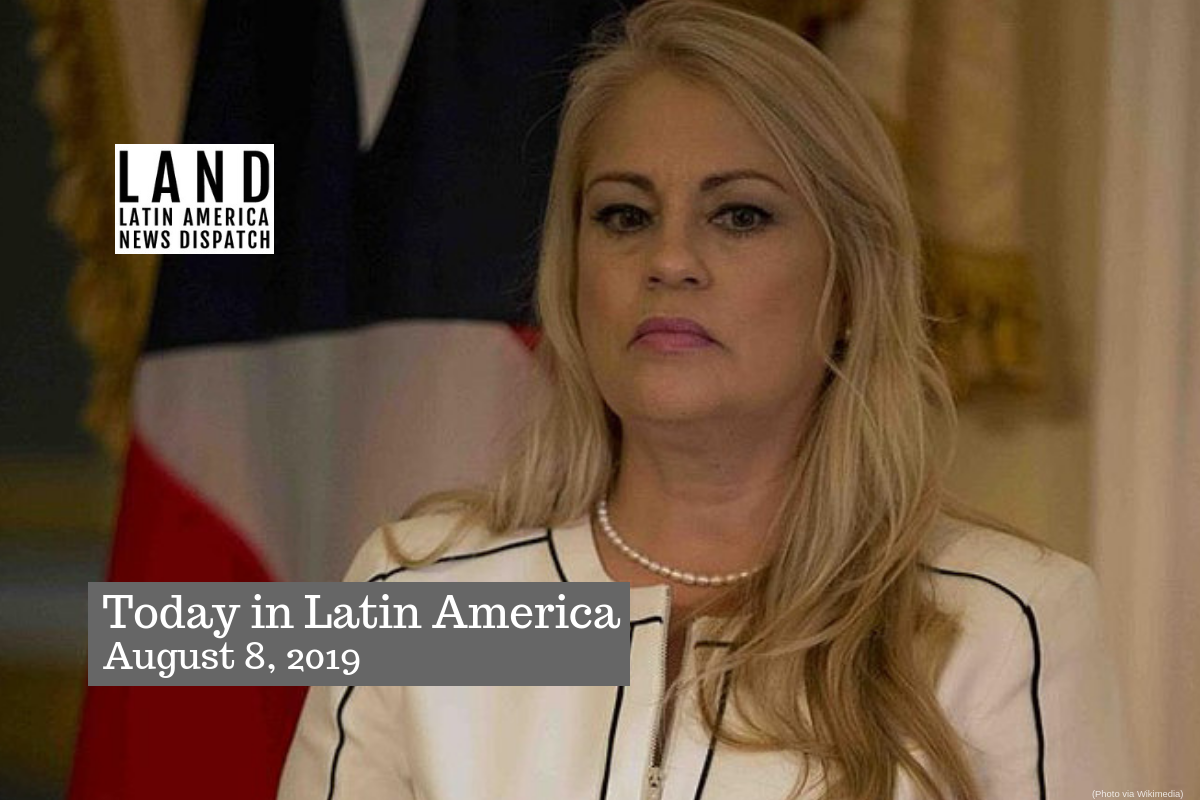 Noting that “Puerto Rico needs certainty and stability” in a statement, Vázquez, who had previously said she did not want the job, became only the second female governor in Puerto Rican history yesterday.

U.S.-MEXICO BORDER: Immigration and Customs Enforcement (ICE) officials conducted raids in seven food processing plants in six cities around Mississippi, resulting in at least 680 arrests of mostly Latino workers. In Morton, 40 miles (65 kilometers) east of the state capital of Jackson, ICE filled three buses —two of men and one of women— at the Koch Foods Inc. plant. The detainees were reportedly transported to a military hangar “to be processed for immigration violations.” Federal prosecutors believe that the operation marked the largest workplace sting in over a decade, and the largest single-state immigration enforcement sweep in U.S. history.

UNITED STATES: As the San Francisco begins a sweeping crackdown on crime, federal agents arrested 32 people, many of them Honduran nationals, concerning international drug trafficking crimes. Seventeen agencies will collaborate in the year-long operation that will focus on the Tenderloin district of the city, a 50-block area “smothered by lawlessness,” according to U.S. Attorney David Anderson. Matt Haney, San Francisco Supervisor for the Tenderloin district, said that residents support the neighborhood “clean up,” but said that he hopes that the operation does not interfere with sanctuary laws in place since 1989.

GUATEMALA: Speaker of the House Nancy Pelosi (D-CA) arrives in Guatemala today. It is unclear with whom she will be meeting, as her travels are not part of an official meeting. Pelosi’s visit to the country comes three days before the second round of the presidential elections and with the “safe third-country” agreement as a political backdrop. Democratic lawmakers have strongly denounced said immigration pact saying that it outsources the United States’ responsibilities to the aid of asylum seekers.

HONDURAS: Protests erupted across Honduras after President Juan Orlando Hernández denied that he allegedly accepted $1.5 million in drug money as part of his presidential campaign. Riot police clashed with demonstrators, firing tear gas to dissipates crowds in Tegucigalpa. Hondurans participating in the protests used the term “narco-dictatorship” to refer to the Hernández administration.

JAMAICA: Culture Minister Olivia Grange has demanded that the British Museum returns two “priceless” artifacts to the island. Among the objects are a 500-year-old wooden figure representing Boiyanel, a rain deity, and a carved bird-man spirit figure dating back to 1792, both of which were taken from the island when it was a colony of the British Empire. Minister Grange wants both objects to be repatriated, saying that they “belong to the people of Jamaica.” Both the rain god and the bird-man figures, which belong to Taíno culture, are currently held in the museum’s storage.

VENEZUELA: In protest of the latest U.S. economic sanctions on the country, President Nicolás Maduro has suspended its participation in the dialogue with the Venezuelan opposition, which was set to take place today in Barbados. In an official statement released on Twitter, the Ministry of Communication said that opposition leader Juan Guaidó “celebrates, promotes, and supports” the economic embargo on Venezuela.

COLOMBIA: Yesterday, Iván Duque marked his first year as President of Colombia. The youngest Colombian to ever hold the presidency, Duque’s administration has been criticized for “not having a clear road map” and for failing to address the promises of the landmark peace accords of 2016. His approval rating in July stood at 37 percent, down six points from Feb, and on Monday, the Colombian peso plunged to a record low versus the U.S. dollar. Analysts and lawmakers interviewed by Reuters believe that Duque “must push pension and energy reform” through Congress to reactivate Colombia’s economy.

BRAZIL: A 10-1 ruling by the Supreme Court (STF) blocked former president Luiz Inácio Lula da Silva’s prison transfer. Da Silva’s lawyers sought to move him from a single isolated room in federal police facilities in the city of Curitiba to the Tremembe prison, northeast of São Paulo. In it is now up to the STF to determine the jail that the former leader of the Partido dos Trabalhadores (PT) will be sent to serve his 12-year sentence.

URUGUAY: Customs officials are becoming increasingly concerned that the country is becoming an international drug trafficking hub. In recent weeks, two large cocaine shipments coming from the port of Montevideo have been seized by European authorities. On May 16, authorities at the French airport of Carrasco confiscated 603 kgs (1329 lbs) of cocaine from a private jet that flew in from Uruguay. Later, on Aug. 3, German police seized $1.1 billion worth of the narcotic in Hamburg from a container shipped from Uruguay—the single largest drug haul ever impounded by the country’s customs.