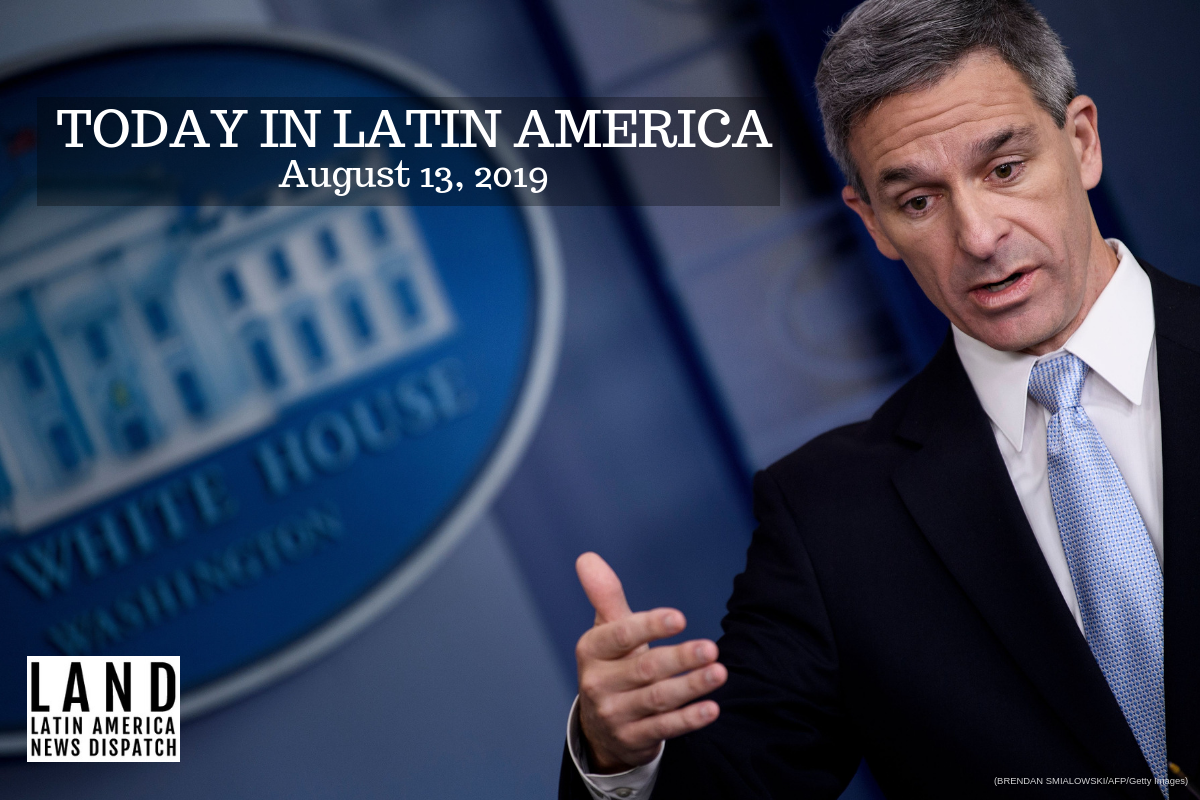 Acting Director of the US Citizenship and Immigration Services Ken Cuccinelli speaks during a briefing at the White House August 12, 2019, in Washington, DC. (Photo by BRENDAN SMIALOWSKI/AFP/Getty Images)

UNITED STATES: A new immigration policy seeks to favor wealthier immigrants and deny green cards to many migrants who use public assistance like Medicaid and food stamps. Ken Cuccinelli, acting director of the United States Citizenship and Immigration Services (USCIS), said the rule would focus on legal immigrants “who are self-sufficient.” Advocates and legal experts believe that the policy would “cut legal immigration in half” by denying visas and permanent residency to thousands of people for “being too poor.” Pushed by Trump’s senior advisor Stephen Miller, the sweeping change goes into effect on October 15.

UNITED STATES: The Trump administration has made it easier to remove endangered species from the Endangered Species Act, significantly weakening protections for animals and enabling the development of extractive projects on areas populated by this threatened species. The U.S. Department of Interior announced the modifications to the nation’s bedrock conservation law, arguing that it will “help conservation efforts.” Critics said that the change would accelerate the loss of flora and fauna, at a time of where global extinctions at a record high. California and Massachusetts have said that they will file lawsuits to block these environmental rollbacks.

MEXICO: President Andrés Manuel López Obrador said on Monday that he would not cancel any existing mining concessions in Mexico, but added that he would not grant any new ones. During a visit in the north-central state of Zacatecas, López Obrador noted that over 80 million hectares, or “40% of the national territory,” has been handed out to mining companies. The president added that the extractive efforts will not be done “in a thousand generations” from now. Mexico has been the world’s leader in silver production for eight years in a row.

MEXICO: Yesterday, Catholic authorities announced the death of Cardenal Sergio Obeso Rivera, Emeritus Archbishop of Xalapa, at age 86. The Cardinal spent 65 years serving as a priest in Mexico, becoming involved in the peace negotiations with the Zapatista Army of National Liberation in 1996. Obeso served three terms as president of the Mexican bishops’ conference, being elected in 1982, 1985, and 1994.

PUERTO RICO: Governor Wanda Vásquez announced on Sunday that her government would be suspending a contract to rebuild that island’s power grid destroyed by Hurricane María. “There is no room in this administration for unreasonable expenses,” Vásquez said, regarding the annulment of the $450,000 deal with Stantec, a consulting firm based in Canada. Vásquez noted that one of her administration’s priorities would be transparency, particularly with government contracts.

COSTA RICA: On August 9, new legislation in the country came into effect recognizing the nationality of indigenous peoples living on the border with Panama. President Carlos Alvarado signed the law that sets up mechanisms to grant Ngäbe indigenous population, comprised of some 3,000 members, with national identity documents. “Today we reaffirm our commitment to guarantee the right of all peoples to self-determination,” said President Alvarado. The lack of nationality has been a historical obstacle for indigenous populations to access healthcare and education services.

GUYANA: U.K-based Tullow Oil announced yesterday that it had discovered a large oil well near the coast of Guyana, which raised their stock prices by 20%. “It looks like we have something we would develop. It looks like we have a long-term business in Guyana,” one Tullow representative said. This discovery comes as Guyana attempts to curb its reliance on fossil fuels, while deep-water oil discoveries off its shore keep growing. The nation is expected to begin exploiting its “unprecedented” oil fields in 2020, with outputs forecasted at 120,000 barrels a day.

VENEZUELA: Lawmakers loyal to President Nicolás Maduro have stripped immunity to four opposition congresspeople, raising to 18 the number of legislators that the government has threatened with criminal prosecution. Opposition leader Juan Guaidó said that the government is seeking to hold early legislative elections, as the pro-government Constituent Assembly gathered for the unscheduled meeting yesterday. During the session, Assembly leader Diosdado Cabello said that it would create a commission to evaluate when would be the best time to hold elections. Congressional elections are scheduled for December 2020.

ARGENTINA: Following yesterday’s political primaries, known as PASO, the national currency and its stocks and bonds came tumbling down. The overwhelming victory of the Peronist ticket, which includes center-left Alberto Fernández as president and Cristina Fernández de Kirchner as vice president, set off a shock wave through its domestic market. President Mauricio Macri said his coalition, which received only 32.1% in comparison to the opposition’s 47.7%, “would reverse the bad result” on October 27.

CHILE: On Sunday, the Ministry of Agriculture declared the region of Valparaíso as an agricultural emergency zone, as a severe drought and widespread water shortages are affecting larges swaths of farmland. Authorities have reported a 75% deficit in precipitation, which has increased the loss of crops and wildlife. The Undersecretary of Agriculture, Alfonso Vargas, said that the application of this measure might also be applied for the Metropolitan, O’Higgins, and Maule regions.