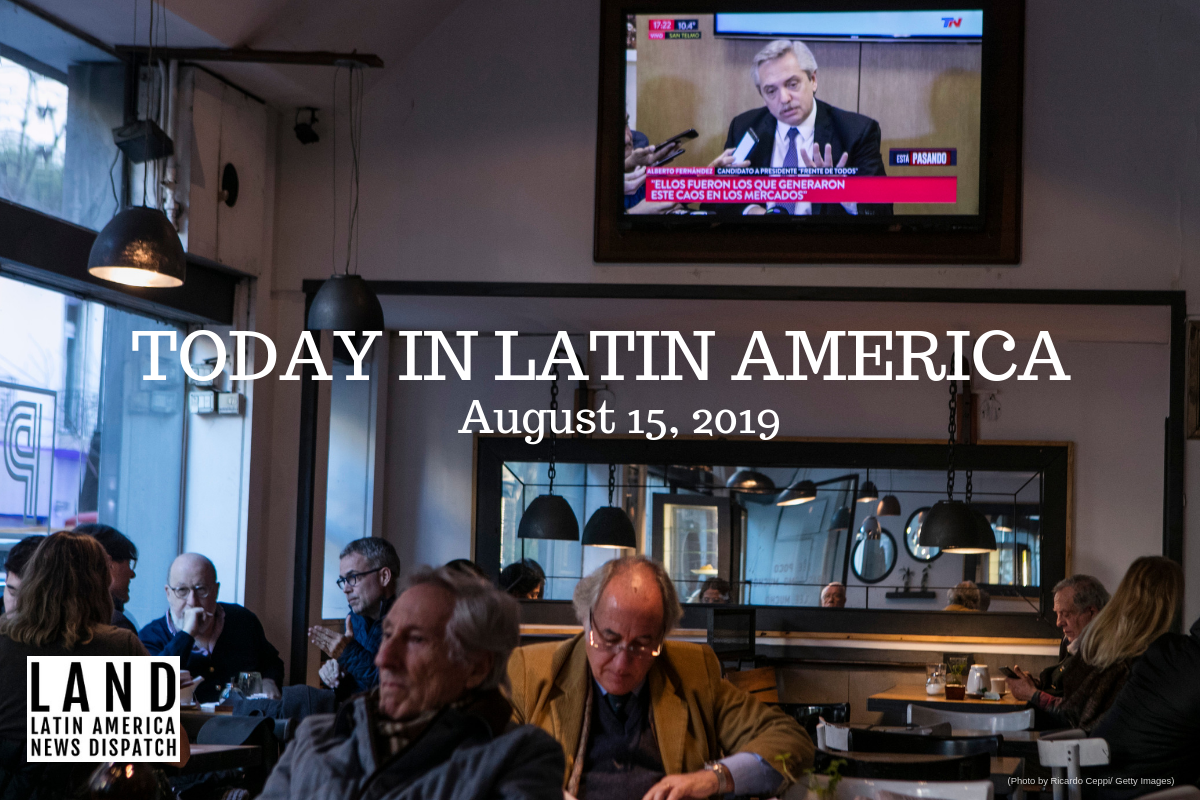 ARGENTINA: After a resounding loss at the ballot over the weekend, President Mauricio Macri has enacted a new set of temporary economic measures that serve as a relief to working-class and lower-income families. Some of the initiatives include an increased minimum wage, reduced payroll taxes, a bonus for informal workers and a freeze in gasoline prices that will reportedly last 90 days. Macri announced the new set of measures during a televised statement, where he said that “over 17 million workers and their families” will be benefited.

MEXICO: Alejandro Moreno has been elected as the new president of the Institutional Revolutionary Party (PRI), Mexico’s oldest political organization. The 44-year-old politician commonly known as Alito will lead the PRI between 2019 and 2023 after receiving 85.07% of the votes in the party’s internal election, winning a majority in all Mexican provinces. Alito has served as a federal congressman twice, as well as senator and governor for Campeche, his native state. The PRI was founded in 1929 and held power in Mexico between 1929 and 2000 without interruption.

US-MEXICO BORDER: U.S. Border Patrol agent Matthew Bowen has pleaded guilty to intentionally running over a Guatemalan migrant in Arizona two years ago. Bowen acknowledged that he deliberately ran over 23-year-old Antonín López Aguilar on December 3, 2017, while he was stationed in Nogales. Bowen, who agreed to resign as a Border Patrol agent, is expected to be given a 1-year sentence on October 15 after reaching a plea deal with the U.S. District Court in Tucson.

HAITI: As tourism began to make a resurgence over the summer, major airlines announced cancellations on some of its Haiti-bound routes from the United States. American Airlines attributed the abandonment of about 115 daily flights as part of an ongoing grounding of the Boeing 737 MAX, an aircraft involved in two crashes in the last five months. This is the second time in a year that American Airlines reduces its service to Haiti. Additionally, Spirit Airlines flew its last flight between Fort Lauderdale and Cap-Haïtien on June 18, citing “operational issues.”

BELIZE: New fishing regulations are allowing the country to become one of the world leaders in protecting the ocean. Belize has restricted its 3,000 commercial fishers to two geographic areas each. Earlier this year in April, Belizean authorities issued a plan to set aside 10% of its territorial waters as no-take marine protected areas (MPAs), nearly tripling the size of its existing zones. Belize is the only nation in the world that has successfully divided all its territorial waters, including its waters used for fishing.

PANAMA: The Panama Canal Authority (ACP) announced yesterday that they would continue to allow Venezuelan vessels to circulate through despite recent U.S. sanctions. Jorge Quijano, CEO of the ACP, said that the waterway “would not submit to pressure from third countries” regarding what vessels can use the canal, meaning that Panama would remain “neutral.” Earlier this year, the Panamanian Maritime Authority (AMP) removed Panamanian flags from vessels linked to Syria and Iran that violate international sanctions.

COLOMBIA: Yesterday, former president Andrés Pastrana admitted of having flown on Jeffrey Epstein’s private jet, connecting him to an international child abuse scandal led by the American multimillionaire who committed suicide on Aug. 10. Pastrana’s name appears in the 2003 logbook of Epstein’s aircraft, the “Lolita Express,” but he declines having ever visited his “infamous island” in the Bahamas. Pastrana also said that Epstein traveled to Cuba upon Fidel Castro’s invitation and that the close ally of President Iván Duque accompanied him to Havana.

PERU: Yesterday, the Lima’s Mayor Jorge Muñoz spent the day trying to circulate the Peruvian capital in a wheelchair after accepting a challenge from Pilar Jauregui, Peru’s three-time badminton champion for women with disabilities. The awareness-raising campaign created by Jauregui, called “put yourself in my chair” (“ponte en mi silla”), shows the daily struggles regarding mobility around Lima, where the public bus and railway systems are not wheelchair-accessible. Lima will host the Parapan American Games, which begin on August 23.

CHILE: Two houses collapsed yesterday in Valparaíso, causing the death of at least six people. Rescue workers have only been able to recover two bodies out of the rumble, while two children who were injured were taken to the local hospital. Minister of Housing Cristián Monckeberg announced that he would provide resources to demolish properties in Valparaíso that have a pending demolition order, saying that eight other houses are “at-risk” of collapsing. Monckeberg also noted that his agency would support municipalities throughout the country to detect areas at risk within their respective jurisdictions.

BRAZIL: Women workers and labor leaders gathered in Brasília to demand better working conditions in the field of agriculture, particularly in the rural parts of Brazil, voicing their discontent with President Jair Bolsonaro’s passivity towards their needs. The women seek land reform, better representation in politics, and equal rights in the workplace. Earlier this week, indigenous women also protested the lack of respect on their human rights and their territory, which they allege is “under attack” from the current administration.