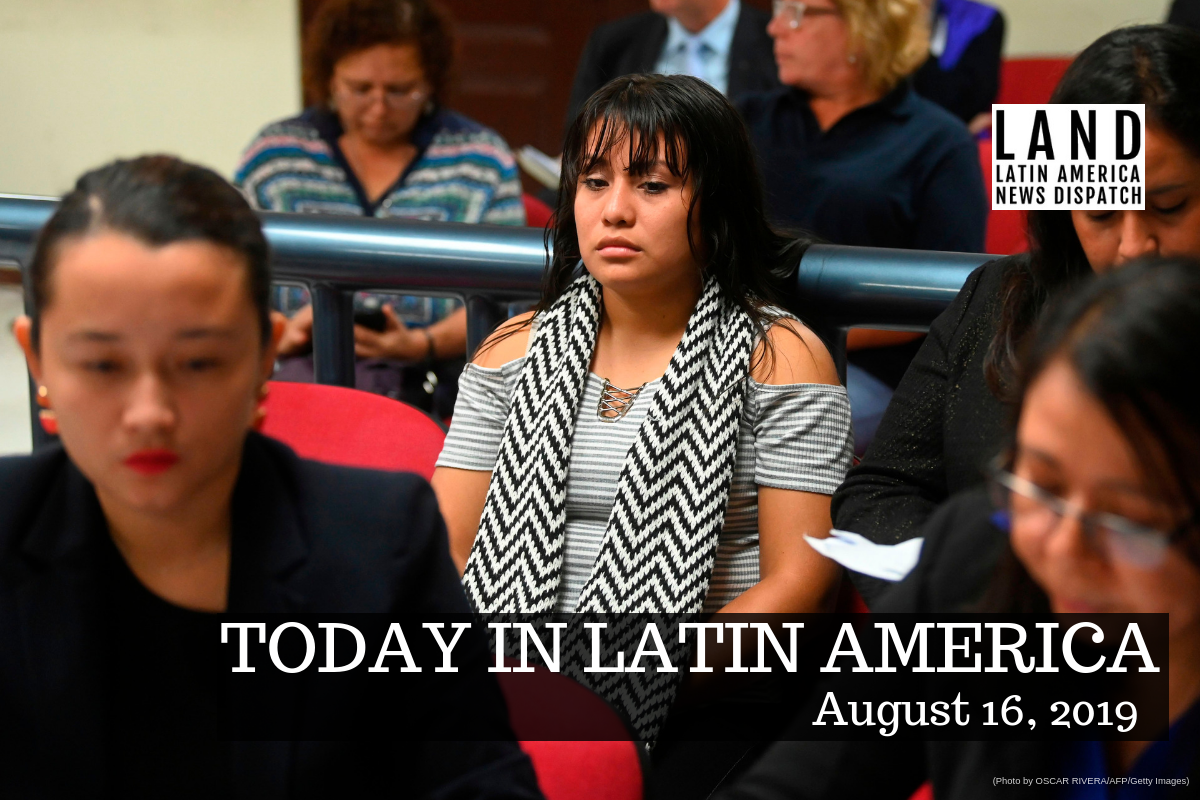 Salvadorean rape victim Evelyn Hernandez (C) is seen prior to her hearing at Ciudad Delgado's court in San Salvador on August 15, 2019. (Photo by Oscar Rivera/AFP/Getty Images)

EL SALVADOR: A woman accused of aggravated murder after delivering a stillborn baby, following a pregnancy that resulted from rape, will hear the verdict of her retrial today. The reopening of the case comes after the country’s Supreme Court overturned and annulled a 30-year murder conviction against 21-year-old Evelyn Beatríz Hernández in February of this year. In her first trial in July 2017, a Salvadoran judge said that failing to seek antenatal care and inducing an abortion amounted to murder. “I only asked for justice after being raped. I am innocent,” said Hernández in front of court yesterday.

MEXICO: Citing concern with the state of the global economy, Mexico’s Central Bank (Banxico) lowered interest rates for the first time since June 2014. Banxico’s five-member board voted to reduce the overnight interbank rate by 25 basis points to 8.00 percent. With this monetary policy maneuver, Banxico follows an international trend of cutting interest rates, joining other countries like India, Thailand, and New Zealand, who have resorted to similar modifications to counteract slowing inflation and the recent behavior of domestic and international yield curves.

MEXICO: On Wednesday, the Supreme Court asked Mexico’s Health Department to regulate medical marijuana usage within six months, saying that their 2017 ruling on legalization had put rights at risk for patients. The decision comes after Mexico’s top court favorably ruled a legal challenge on behalf of a child who received a prescription for THC to treat his epilepsy, but had not been able to access the drug. The Health Department said it would comply with the Court’s ruling.

REGION: July sets global heat record since measurements began in 1880, according to the U.S. National Oceanic and Atmospheric Administration (NOAA). The record-breaking month follows what was reported as the hottest June in recorded history, said the NOAA. Nine of the last ten hottest months on record have occurred since 2005, with the previous five years topping the list.

GUATEMALA: As they have done after the presidential elections in 2007, 2011, and 2015, the national health workers’ union has begun blocking the primary highways across the country to urge the incoming government “to fulfill their duties” with the health sector. The syndicate is demanding that the new administration abides by the collective labor agreements signed at the beginning of the year, which ensures them an increment in their wages and more protections in their workplace.  President-elect Alejandro Giammattei has begun the transition government, meeting with outgoing president Jimmy Morales yesterday in Guatemala City.

PERU: A court sentenced governor of Puno Walter Aduviri to six years in prison for disturbing police order after sustained protests against a Canadian mining company in 2011. Aduviri, an indigenous Aymara leader, was found guilty in absentia on August 13 for allegedly coordinating the demonstrations against Bear Creek Mining Corp. Denominated the “Aymarazo,” the protests turned deadly, leaving “several casualties” and a multimillion-dollar loss in Puno, according to Peruvian media. Aduviri’s current whereabouts remain unknown.

PARAGUAY: The popularity of President Mario Abdo Benítez continues to decrease following a close impeachment call after a shady energy deal with Brazil was called off. Abdo has reached his first year in office with a 46 percent disapproval rating, according to a report published by the local newspaper Última Hora on Wednesday. Moreover, 56 percent of Paraguayans surveyed by the newspaper also believe that “corruption increased” during the current administration. Embattled president Abdo was sworn in as president on Aug. 15, 2018, after receiving 46 percent of the vote with the Colorado Party in the Paraguayan elections.

ARGENTINA: Yesterday, markets reacted positively to President Mauricio Macri’s recent efforts to provide relief to working class and lower-income families. Argentina’s stock index, Merval, went up by 3 percent in the afternoon. The national currency, the peso, ended the day around 5 percent higher at 57.4 pesos per dollar after presidential frontrunner Alberto Fernández said that a 60-to-1 exchange rate “is correct.” After hosting primary elections over the weekend, where incumbent Macri endured a 15-point defeat, Argentina suffered the 2nd-biggest economic crash since 1950 for any stock market, surpassed only by war-torn Sri Lanka in June 1989.