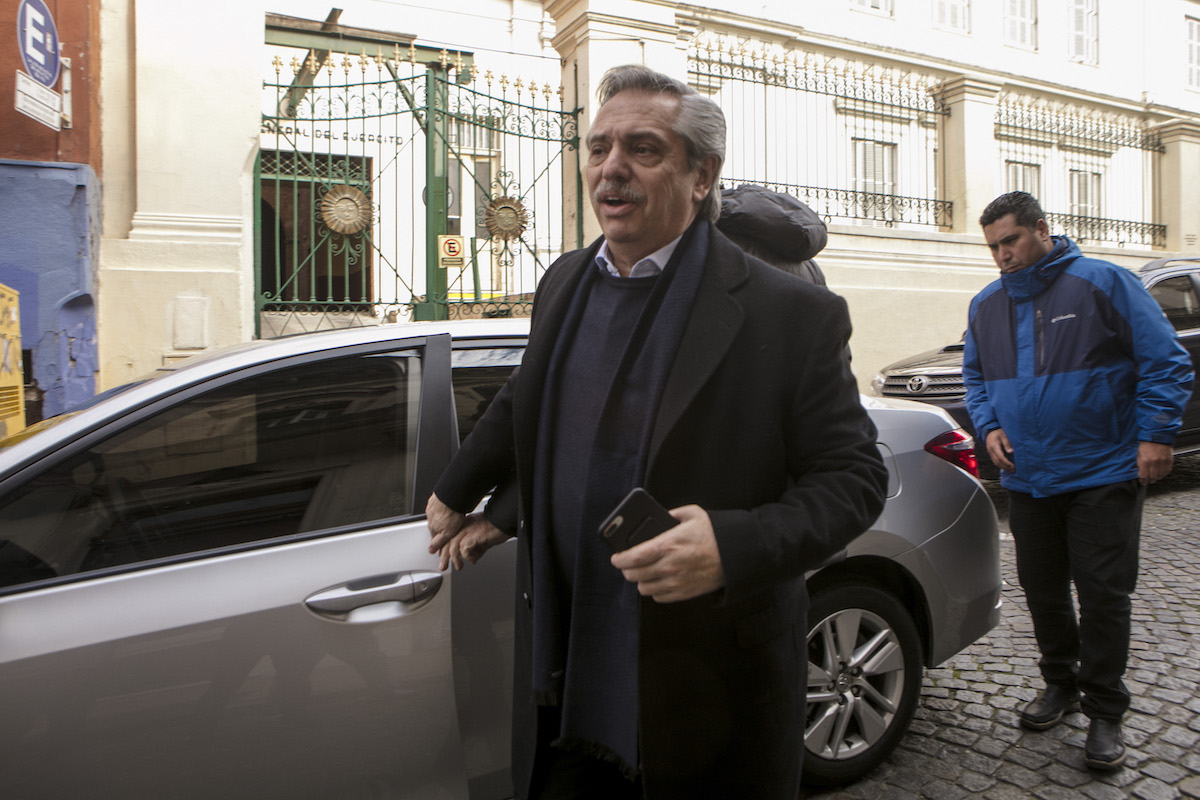 Presidential candidate Alberto Fernández arrives before a meeting with Mayor candidates of the Frente de Todos at his bunker on August 15, 2019 in Buenos Aires, Argentina. (Photo by Ricardo Ceppi/ Getty Images)

Argentines were stunned in mid-August when the center-left candidate Alberto Fernández won the national primary elections for the presidency, surpassing all predictions with a whopping 15-point lead over the incumbent Mauricio Macri. The primaries, known as the “PASO”, serve to winnow down the number of presidential candidates, with a 1.5% vote share required to progress to the general elections on October 27.

Fernández’s victory on August 11 came just three months after Argentina’s former president Cristina Fernández de Kirchner’s shock announcement that she would run as his vice-president, having asked him to lead her electoral ticket. The highly popular yet divisive politician had been widely expected to run again for the presidency herself. The victory was a vindication of her strategic decision to step aside from the top job.

But the result sent financial markets into a panic over the return of populism, and the value of the peso collapsed. So who exactly is the new favorite to enter Argentina’s presidential palace, the Casa Rosada, in December and why did 47% of the electorate vote for him?

Fernández’s bid for the presidency comes on the back of a well-established political career, although with little limelight. A law graduate, occasional university law lecturer and rock guitar player, Fernández first entered politics following Argentina’s return to democracy in the mid-1980s, working in the ministry of economy under Raúl Alfonsín’s government. Having briefly led the youth wing of a small conservative party, he has since been a member of the large Peronist party, the Justicialist Party or PJ, which follows the principles of former president Juan Perón.

Despite, or some may argue because of, his Peronist affiliations, Fernández has consistently managed to avoid easy ideological labeling. By working with governments across the political spectrum he has demonstrated himself as a versatile and capable politician. This has allowed him to build a cross-cutting appeal as a presidential candidate to move political divides that, as with much of Latin America, grew during in the early 20th century in the so-called “pink tide” of left-wing governments.

The center-left governments of Néstor Kirchner between 2003 and 2007 and his wife Cristina Fernández de Kirchner until 2015, left Argentina increasingly polarized, and this division continues to structure the country’s politics today.

On one side are the “Kirchnerists,” who support the legacy of the center-left governments that saw significant poverty reduction and socio-economic redistribution alongside progress in social and human rights. On the other are those who criticize the populist tendencies of Fernández de Kirchner and, in particular, are angered by allegations of corruption during her administration.

In 2015, Mauricio Macri’s center-right Cambiemos (Let’s Change) coalition lost both the primaries and first general election, but went on to win the presidency by a narrow margin. Macri’s victory appeared more due to his capacity to capture popular anger against the previous administration than an alternative offering. His 2019 re-election campaign has been similarly led by slogans of “not returning to the past” and a clear policy agenda has been remarkably absent. At the coalition’s closing rally for the primaries, a viral and much-mocked video showed Macri screaming with joy over his party’s ability to reduce levels of flooding in Buenos Aires. His re-election ticket remains dependent on the anti-Kirchner vote.

Fernández has complicated the Cambiemos re-election campaign by leading a new center-left Frente de Todos (Front for All) alliance that includes Kirchnerism but has also brought together a broad spectrum of non-Kirchnerist voters and parties, united in their rejection of the Macri presidency. As Fernández stated several months before revealing his own candidacy: “With Cristina is not enough but without her it’s not possible.”

Fernández’s shock success in the primaries relied on three factors. First, he captured the Kirchnerist vote without being held hostage to it, reflecting his own political trajectory. He was central to Néstor Kirchner’s 2003 victory and became his chief of staff. Although he continued this position under Fernández de Kirchner following her election in 2007, he resigned in 2008 during the fallout from her controversial decision to increase tariffs on agricultural exports.

Fernández’s leadership of his new Frente de Todos group has been remarkable in unifying opposing political forces and centralizing local political alliances under a national offering.

A Mountain For Macri

Third, his campaign for the presidency took off as Macri’s image was deteriorating under a deepening economic crisis and ongoing hyperinflation. The government’s austerity program has put strain on the middle class who increasingly struggle to meet basic living costs such as for food or energy.

By 2019, the government had few positive economics results to show. From the start of his campaign, Fernández went on the offensive and used his broad-base alliance to unify the anti-government vote.

The only hope for Macri in the October general election is that Fernández fails to win 45% of the vote (or 40% with a 10-point led), thus triggering a second round run-off. Although the primary results can be reversed, the scale of Fernández’s lead makes this improbable even if Macri were to absorb the votes from the third-placed candidate, which is what happened in 2015. The PASO results suggest such a scenario is improbable. If Fernández wins, he would make history and buck a regional shift to the right.