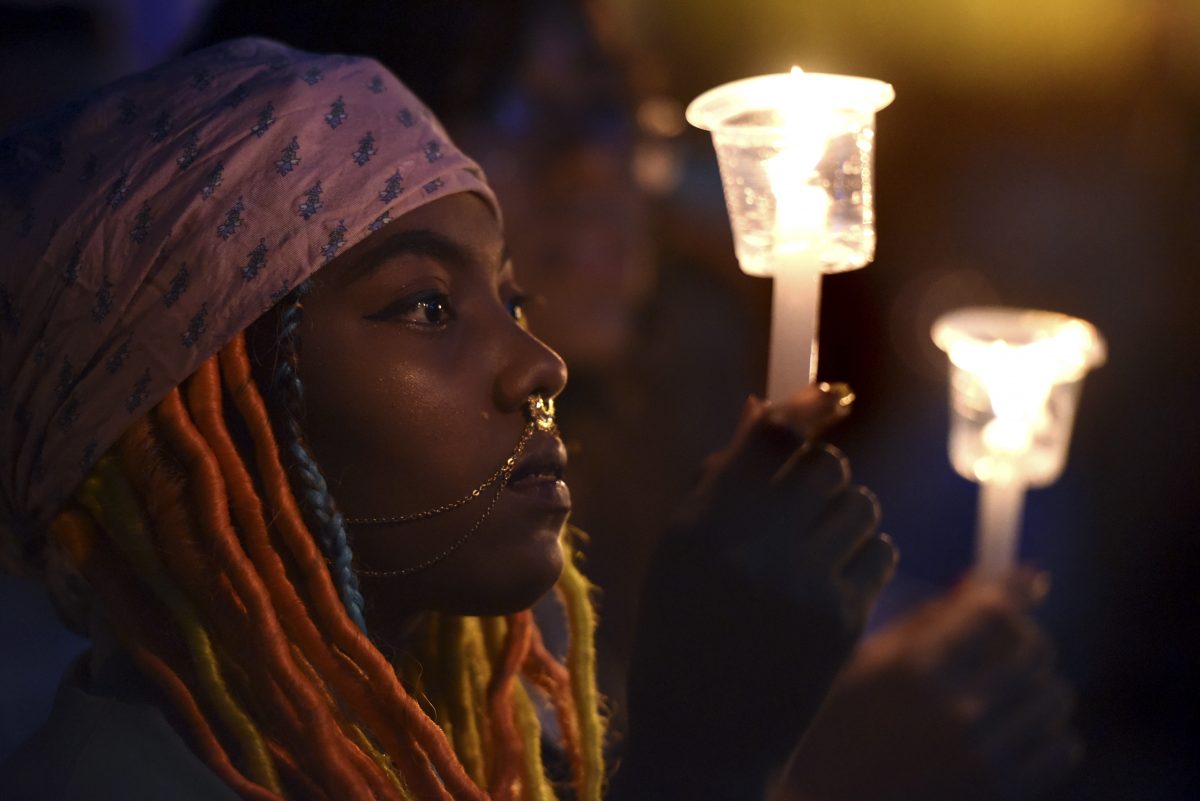 A woman holds a candle during a protest against the murder of social leaders and ex-FARC guerrillas in Cali, Colombia on July 26, 2019. (Photo by Christian Escobar Mora/AFP/Getty Images)

Grito in Spanish can mean “to cry.” For example, the cries of despair of María del Pilar Hurtado’s son in a video that circulated throughout the Colombian media this summer.

In the video, the boy kicks and screams next to his mother’s lifeless body in the town of Tierralta (Córdoba) in Colombia’s northern Caribbean region.

Grito also means a call. The hashtag #Julio26ElGrito is a call to action; the social media response expresses the outrage of many Colombians at the ongoing and rising violence against land and human rights activists.

A community organizer and activist, María del Pilar Hurtado was also a mother, a wife, a sister, a daughter and a Black woman. Hurtado and her family settled in Tierralta after being forcibly displaced from their home in Puerto Tejada, Cauca.

Despite the official ceasefire peace agreement signed by the government and FARC leaders in 2016 after 50 years of civil war, criminal armed groups have re-ignited the violence in areas previously occupied by FARC, and where the Colombian state has not established territorial control.

In the past decades, Colombia’s rich Pacific Coast region has been at the center of legal and illegal economic battles. The country’s wealth in natural resources, and geo-strategic location make it an attractive target.

The increased presence of state, guerrilla and paramilitary groups has resulted in extreme violence and human rights violations against Black and Indigenous communities. In contexts of war, state and non-state actors perpetrate violence against women in order to instill fear, domination and control against communities that resist dispossession.

Research by Betty Ruth Lozano Lerma, an Afro Colombian sociologist, examines the consequences of feminicides in Afro Colombian communities. The implications transcend personal and familiar relations and impact their collective rights disrupting the relationships to their ancestral and traditional territories.

Trying to rebuild her family’s life in Tierralta, Hurtado became involved in a dispute over access to land belonging to the mayor’s father.

Following her assassination, the mayor’s office released an official statement dismissing her role as a community organizer and activist.

Access to justice is a problem that many Colombians face. Prejudice against Black women and their communities, a symptom of systemic racism and ongoing colonial violence, creates additional barriers to justice.

Francia Márquez, recipient of the 2018 Goldman Prize for her social and environmental activism, condemned the murder of María del Pilar Hurtado, linking violence against women to structural racism.

Other Afro Colombian leaders also spoke of the lack of support and protection for the rights of community and social leaders. Audes Jiménez, coordinator for the Red Afrolatinoamericana, Afrocaribeña y de la Diáspora, explained that land conflicts are at the centre of threats and assassinations against Afro Colombian, Indigenous and members of the Juntas de Acción Comunales (community action boards) in the Caribbean region.

The violence in Tierralta and surrounding areas stems from territorial disputes over illicit crops, drug trafficking and illegal mining.

The media circulation of the Hurtado video called attention to Hurtado’s case including the authorities. President Ivan Duque, who has spoken about the challenges of protecting the lives of land and human rights activists, sent his condolences to Hurtado’s family.

He joined the people of Cartagena on the streets on July 26th for a protest to denounce violence against community activists. The crowd, expressed disapproval for Duque. His government has been openly critical of the peace agreement and has attempted to prevent its implementation

The 6 Points Of The Peace Accord

The Colombian government signed a peace accord with the Revolutionary Armed Forces of Colombia (FARC) in 2016.

The accord contains six points:

After three years, Colombian-Canadians expressed their disappointment at the slow implementation of the agreement. On July 26th, they responded to the call for walking for life and peace in Colombia across six Canadian cities.

The Commission was established as part of the fifth point in the peace accord to understand what happened during the conflict and why, as well as to identify how future violence can be avoided.

As part of this last aim, the first of a series of public dialogues organised by the Commission focused on the violence against activists. The conversation revolved around questions such as: why are they being killed? What is the responsibility of the state and Colombian society to prevent this violence? What is the impact for these communities, and democracy in Colombia?

Unlike other commissions around the world, the Truth Commission includes the voices of Colombians in exile.

Representatives from the Commission traveled to Montréal and Toronto in April to meet with Colombians in exile, community organizations and academics to begin the process of documenting testimonies.

Meanwhile, the devastating ongoing violence and retaliation against community organizers and human and land rights activists continues. This past weekend, two Indigenous leaders were assassinated by illegal armed groups linked to drug trafficking, prompting the Regional Indigenous Council of Cauca (CRIC) to declare a state of emergency in Colombia.