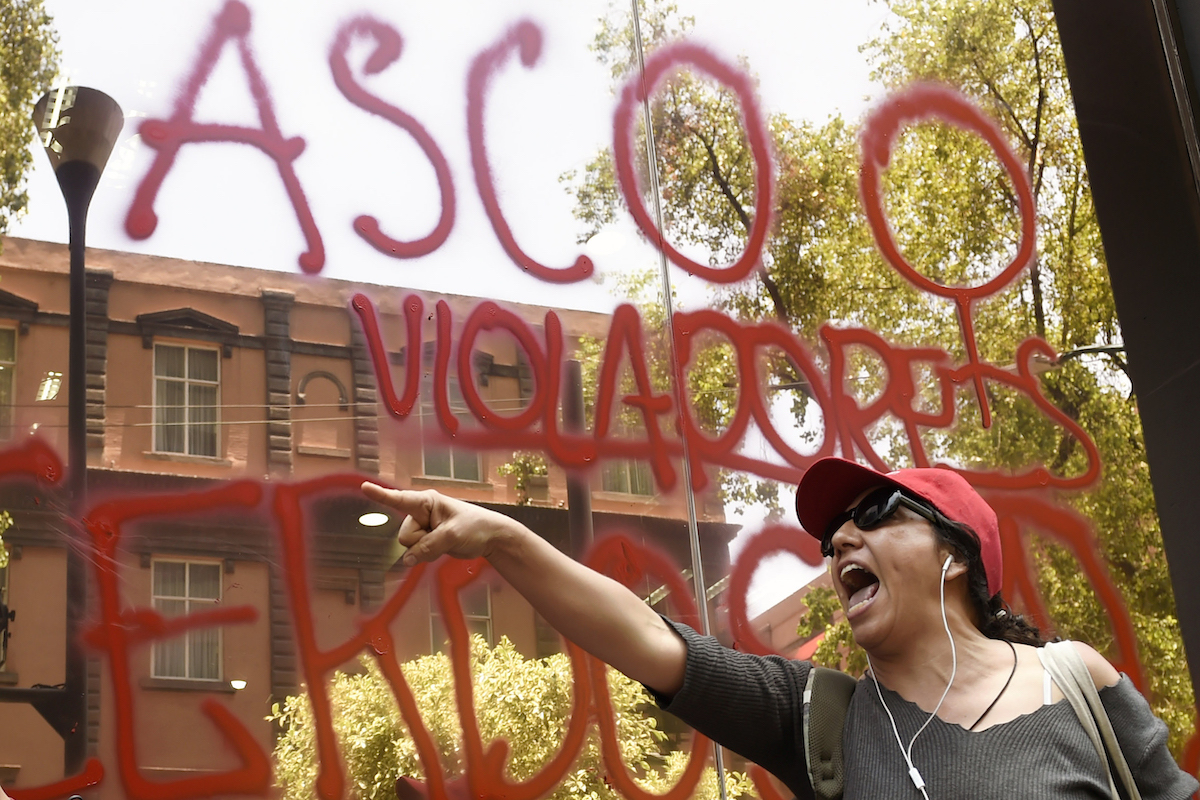 A woman shouts slogans during a protest called by civil organizations against the police, after four police officers had been accused of raping a minor last weekend in their patrol car in the Azcapotzalco neighborhood, in front of the Ministry of Public Security in Mexico City on August 12, 2019. (Photo by ALFREDO ESTRELLA/AFP/Getty Images)

Wearing green bandanas and dousing police in pink glitter, Mexican women on August 16 staged a furious protest in Mexico City after a 17-year-old girl reported being raped by four police officers earlier in the month.

Officials have sent mixed signals about ongoing investigations of the case, and Mexico City Mayor Claudia Sheinbaum triggered fury among feminists when she said there would be no “fabrication of suspects.”

The alleged police rape has hit a nerve in Mexico, where women face extremely high rates of violence and incessant catcalling.

Another teen girl was reported being raped by a Mexico City policeman days before the women’s march, which drew an estimated 2,000 people and included both violent property destruction and wrenching tributes to Mexico’s missing women and girls.

With 1,812 women murdered between January and July this year —about 10 a day— Mexico is Latin America’s second-most dangerous country for women, after Brazil, according to the United Nations. More than 200 Mexican women have been kidnapped so far in 2019.

Yet Mexican President Andrés Manuel López Obrador, who was elected last year in a landslide with a progressive gender agenda and promises to “transform” Mexico, has not followed through on promises to expand women’s rights. In fact, his administration has rolled back some the few federal policies designed to protect and empower Mexican women.

Women in the Workplace

Under austerity measures meant to curb public spending, the Mexican government in February ended an internationally lauded day care program that allowed low-income families to sign up for state-subsidized child care close to their workplace or home.

Rather than pay subsidies to this network of private day care facilities, the Mexican government now gives vouchers worth about $80 every two months directly to families.

Each family may now decide whether to send their children to day care or pay “a sister, an aunt or a grandma,” López Obrador said in a February press conference, giving parents more choice in their child care.

The suggestion that female relatives should care for Mexico’s children infuriated women’s groups and human rights organizations in Mexico.

In a joint statement, 17 civil society groups said the new policy would “strengthen gender streotypes” and “promote discrimination and gender inequality.” It reminded the president that women do 70% of all domestic work in Mexico and that grandmothers already care for 50% of all young children not in their parents’ care.

Mexico’s subsidized child care network, which has served 2 million children since it was established in 2007, has been successful in enabling more women to work outside the home.

According to a 2017 government evaluation, the day care network had relieved 1,825,394 parents of child care duties for 34 hours a week over the past decade. A significant percentage of the communities served by the day care network were either very poor or home to a predominately indigenous population, according to the U.N. Women were the primary beneficiaries.

Mothers who used government subsidized day care were 18% more likely to have gotten a job between 2007 and 2017 compared to those who did not receive government-subsidized child care, according to a government program evaluation.

Even so, Mexico still has the second-lowest female participation in the workforce among developed countries, behind Turkey. Only 4 out of 10 women are employed outside the home.

The Mexican government disappointed feminists again when the government announced in March that it would additionally slash funding for women’s shelters and instead give the money directly to victims of domestic violence.

Worldwide, women are most likely to be murdered by a male partner and may be unsafe in their own homes, making shelters a vital sanctuary.

In Mexico, the number of women stabbed or strangled at home rose 54 percent between 2012 and 2016. In March 2019, the same month the cuts were announced, Mexican police received 56,590 reports of domestic violence—a 16% increase over February 2019.

The plan to stop funding women’s shelters funding was met with immediate and fierce backlash. Advocates for victims of domestic violence warned that cutting shelter funding would expose women and children to even more danger.

“The women’s shelters will remain,” he said on March 7, announcing a new plan to expand the Mexican government’s role in the “protection, attention, punishment and eradication of violence against women and girls.”

Women’s shelters have nonetheless seen substantial budget cuts under the government’s austerity measures. News reports in June revealed that 29% of Mexico’s 81 publicly funded domestic violence shelters received no federal funding at all for the second half of the year.

Women’s Rights “Not a Priority”

López Obrador, a leftist firebrand who won the Mexican presidency in a landslide, remains very popular eight months into his six-year term.

To quell criticism that it doesn’t care about women, his administration in late May announced the launch of a European Union and United Nations program in Mexico to eliminate violence against women.

The investment of €7 million, or about $7.7 million, is called the Spotlight Initiative. It will target three Mexican states with high rates of violence against women: Mexico state, Chihuahua and Guerrero.

The EU program’s goals are to design public spaces that are safer for women, facilitate women’s access to justice and protection services and to “fundamentally change the perception of women within their families and in society.”

A spokesperson for the European Union told the Spanish newspaper El País that López Obrador initially rejected this initiative because gender “was not a priority” for his government.

“That’s our main issue, to guarantee the safety of men and women,” he said.

The president also criticized demonstrators for defacing a famous monument with feminist slogans. He urged Mexican women to protest in a “responsible way, without violence,” and to “protect the cultural and artistic patrimony of Mexico.”

This story, originally published July 10, 2019, has been updated.