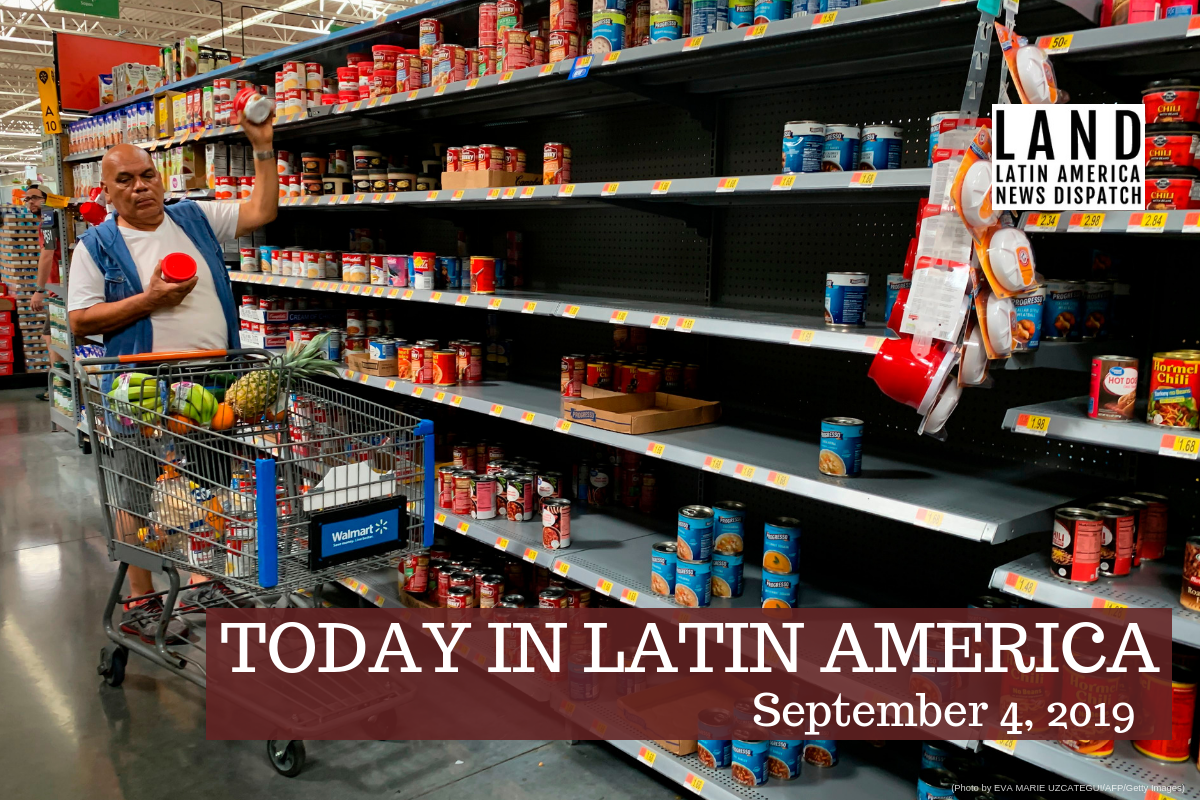 Supplies at a Walmart in West Miami run low on August 30, 2019, as residents prepare for Hurricane Dorian. (Photo by EVA MARIE UZCATEGUI/AFP/Getty Images)

BAHAMAS/UNITED STATES: Hurricane Dorian continued to devastate the Bahamas last night, as the storm made its way towards the southeastern United States. At least five people were reported dead, but local relief representatives predict more deaths will be announced in the coming days. “It looks like a bomb went off,” relief worker Lia Head-Rigby told The Associated Press. Dorian is the most powerful storm on record to ever hit the Bahamas, according to the AP.

The now-Category 2 storm has now grown in size and is expected to cause rain and flooding along the U.S. coast. The Red Cross reported that more than 12,000 people in the Carolinas, Georgia and Florida stayed in its shelters Monday night. More than 2 million people have been told to evacuate the region.

VENEZUELA: Venezuelan opposition leader Juan Guaidó approved the use of satellites yesterday to hunt down Colombian guerrilla camps on Venezuelan soil. The move aligned Guaidó with Colombian President Iván Duque’s military offensive against FARC rebels. Venezuelan President Nicolás Maduro has been accused of harboring Colombian rebels by both Duque and Guaidó. Maduro remains in control of the Venezuelan government, but Colombia, the United States and 50 other countries recognize Guaidó as the interim president. Venezuela has three satellites, including one for ground observation, but they are all under Maduro’s control.

COLOMBIA: The first female mayoral candidate in the rural municipality of Suarez, Colombia, was killed in what appears to be a politically motivated attack Sunday night. Karina García was out campaigning when her car was hit by a grenade and machine gun fire, according to police. García’s mother, a city council candidate and two others were also found dead in the car. Authorities have accused FARC rebels of committing the attack. García’s death was the latest in a recent uptick of political violence in the region. A week before her death, García asked other candidates in a Facebook video to not spread false information about her, citing the potentially “fatal consequences.”

BOLIVIA: Chi Hyun Chung, pastor and presidential candidate for Bolivia’s Christian Democratic Party (PDC), said in an interview Monday that LGBTQ+ people “need to receive psychiatric care.” Chung is a South Korean-born doctor who has lived in Bolivia since he was a child. The PDC party is part of the opposition coalition against President Evo Morales.

BARBADOS: Barbadian Prime Minister Mia Mottley promised relief Saturday to residents of the Island’s Scotland District, who have had little to no access to water. Mottley announced a 12-month, $15 million plan to fix the water pump system. “There has been a failure to review how we manage the hydraulics of a water system over a century old, and continue to believe the infrastructure we have inherited is good enough to do the things necessary to allow access to water,” she said. “Simply put, you cannot continue to use reservoirs and pumping stations in highly elevated areas to supply water to both high and low elevations.”

GUATEMALA: The United Nations-backed International Commission Against Impunity in Guatemala, known as CICIG, officially ended its operation yesterday after 12 years. President Jimmy Morales decided last year not to renew its mandate for another two years, shutting down the commission whose mission was to investigate and prosecute corrupt politicians and public officials, including Morales himself. Iván Velásquez, the commissioner of CICIG, wrote in the Washington Post that CICIG turned Guatemala into a “a place where once-untouchable, powerful elites have learned to fear criminal prosecution.”

UNITED STATES: Walmart announced yesterday that it would limit its sale of ammunition and discourage customers from openly carrying firearms in its stores, following the death of 22 people in its El Paso store in August. The decision is expected to reduce Walmart’s market share of the ammunition market from 20 percent to 6 percent. Walmart CEO Doug McMillon said the company’s central priority is “helping to make the country safer.”

MEXICO: In a tweet Sunday, U.S. President Donald Trump’s new ambassador to Mexico criticized artist Frida Kahlo for supporting Marxism. Following a visit to Kahlo’s house, Ambassador Christopher Landau wrote in Spanish, “I admire her free and bohemian spirit, and she rightly became an icon of Mexico around the world. What I do not understand is her obvious passion for Marxism, Leninism, and Stalinism. Didn’t she know about the horrors committed in the name of that ideology?” The tweet sparked backlash, including by the Mexican Communist Party. Some of the 1,600 comments were supportive, according to NBC News Digital.

MEXICO: Cuban asylum seekers have faced increasing hurdles in traveling to the United States since Mexico cracked down migration this year at the request of U.S. President Donald Trump. More than 5,500 Cubans were detained in the first half of 2019, compared to 504 in all of 2018. Yatsel Jerez Ramón, a migrant who has been in Mexico for six weeks, told The Guardian: “I just want to continue on my journey to the U.S. But I’m scared of being deported, so even if it takes months, seeking asylum in Mexico seems like my only option to reach the border.”