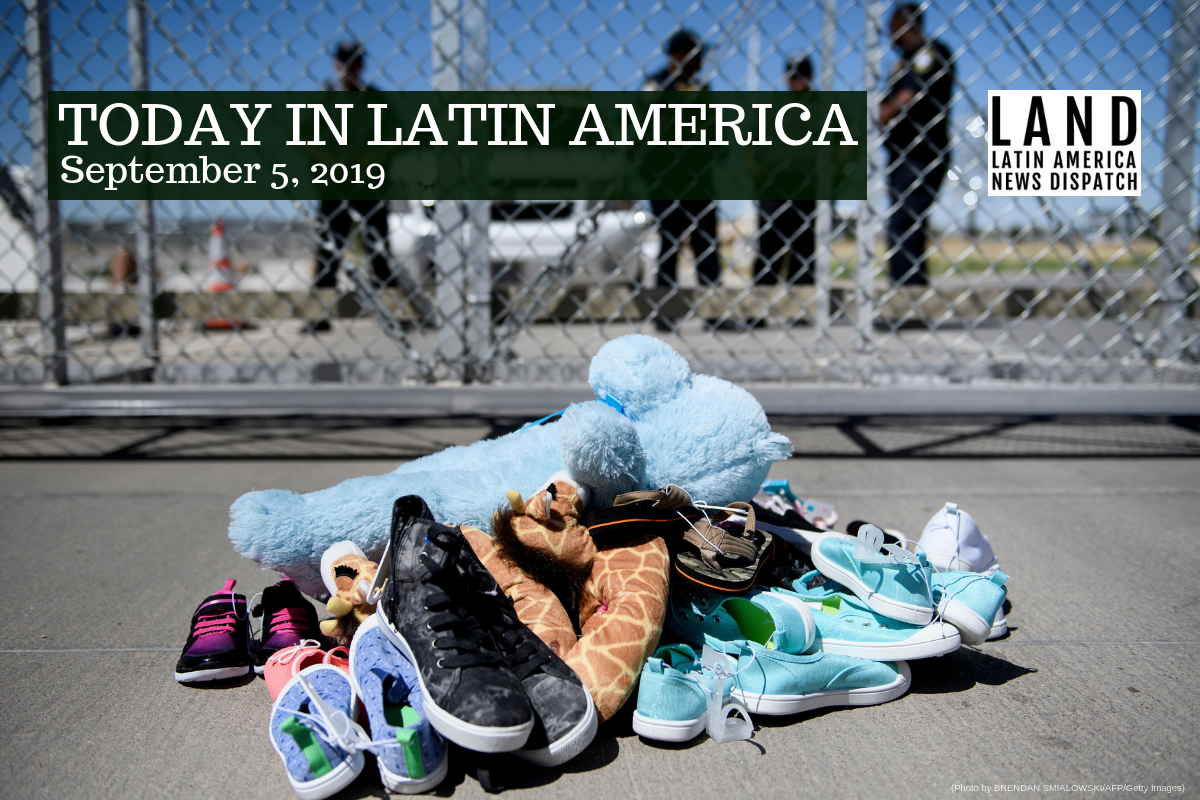 Security personal stand before shoes and toys left at the Tornillo Port of Entry where minors crossing the border without proper papers have been housed after being separated from adults, June 21, 2018 in Tornillo, Texas. (Photo by Brendan Smialowski/AFP/Getty Images)

U.S.-MEXICO BORDER: According to a report yesterday from the inspector general’s office in the U.S. Department of Health and Human Services, children separated at the border show more signs of post-traumatic stress disorder (PTSD) than those who were not separated. Fearing abandonment from their parents, separated children felt physical manifestations of their psychological pain, making statements to physicians like “every heartbeat hurts” or “I can’t feel my heart,” the report said. The majority of cases came during the Trump administration’s “zero-tolerance policy” last year, where at least 2,800 families were separated at the southern border.

BRAZIL: President Jair Bolsonaro accused U.N. Human Rights chief Michelle Bachelet of “meddling” with Brazilian sovereignty and praised the 1973 coup in Chile. Bolsonaro’s comments came after Bachelet voiced concerns regarding the increase in police violence and the chipping away of civic space for human rights activists in Brazil. Bachelet was a victim of torture under the Pinochet regime in Chile, and her father, a member of the air force under Salvador Allende, died in captivity 1974 following the military coup. Bolsonaro went on to commend the coup for defeating leftists like her father.

BRAZIL: Tribes in Brazil with history of ethnic conflicts are putting aside their differences to unite against their common enemy, President Jair Bolsonaro. Their meeting in the Kubenkokre village last week follows the wave of forest fires devastating the Amazon rainforest. Fourteen Indigenous ethnic groups in the Xingu basin held a meeting to discuss the common threat they face, deciding to form a representative council in order to strengthen their collective voice. They are worried about the administration’s plans to allow leasing and mining on Indigenous lands, causing further damage to their land.

COLOMBIA: Colombian troops killed nine Revolutionary Armed Forces of Colombia (FARC) dissidents in an air bombing raid following President Iván Duque’s authorization. Duque has said that the strike is intended to send “a clear message” to the FARC. The attack came one day after former FARC Commander Iván Márquez released a video in which he declared that the FARC would take up arms again, in response to what they see as the Colombian government’s betrayal of the 2016 peace agreement. Duque has also created a special army unit tasked with finding and arresting former FARC leaders.

GUATEMALA: President Jimmy Morales decreed a “state of siege” in five Guatemalan departments: Izabal, El Progreso, Zacapa, Alta and Baja Verapaz. The announcement comes hours after three members of the Guatemalan armed forces were allegedly ambushed and executed by narcotraffickers. The emergency status eliminates constitutional rights like freedom of movement and assembly, granting federal authorities with the ability to detain and question anyone. The “state of siege” also bans carrying weapons.

EL SALVADOR: The United Nations is considering backing an anti-corruption commission in El Salvador, a measure to combat impunity that President Nayib Bukele pressed for both as a presidential candidate and as president. The International Commission Against Impunity in El Salvador (CICIES), which has been approved by the Organization of American States (OAS) and Salvadoran officials, would function like the former UN-sponsored CICIG in Guatemala, which ended its operations Tuesday after Guatemalan President Jimmy Morales decided to not renew its mandate.

HONDURAS: Former first lady Rosa Elena Bonilla was sentenced to 58 years in prison for embezzlement and fraud of over $500,000 in government funds between 2010 and 2014 under her husband Porfirio Lobo’s presidency. The investigation was originally brought forth by the Mission to Support the Fight against Corruption and Impunity in Honduras, the OAS-backed anti-corruption commission in the country. The commission found that Bonilla deposited nearly $600,000 in government funds into a personal bank account days before Lobo’s term ended in 2014. The corruption tribunal of the country’s Supreme Court also ordered Bonilla to pay back 10% of the money. Bonilla used the money to buy jewelry and pay her personal credit cards, according to prosecutors.

BAHAMAS: With Hurricane Dorian gone, the official death toll in the Bahamas stands at seven, but Prime Minister Hubert Minnis expects more deaths to be reported as they begin to work through the catastrophic damage left behind by the storm. Minnis described the storm as “one of the greatest national crises in our country’s history” that left some areas “decimated” with floods, flattened infrastructure, failing communication lines and an estimated 13,000 destroyed or damaged homes, according to the International Federation of Red Cross and Red Crescent Societies. The Red Cross is joined by the U.S. Coast Guard, Britain’s Royal Navy, the United Nations, the San Juan, Puerto Rico Coast Guard and other organizations and delegations that have rushed to the Bahamas to help with relief efforts such as search-and-rescue and medicine and food distribution.

MEXICO: President Andrés Manuel López Obrador is calling for a new probe into the 43 students from the Ayotzinapa teacher school who disappeared in 2014. The announcement comes after a Mexican court freed Gildardo López Astudillo, the alleged leader of the local drug gang believed to have killed the missing students after they were kidnapped by police officers in the town of Iguala, in the state Guerrero. Outside experts have criticized the inquiry into the students’ disappearance, citing errors and omissions in the official investigations.