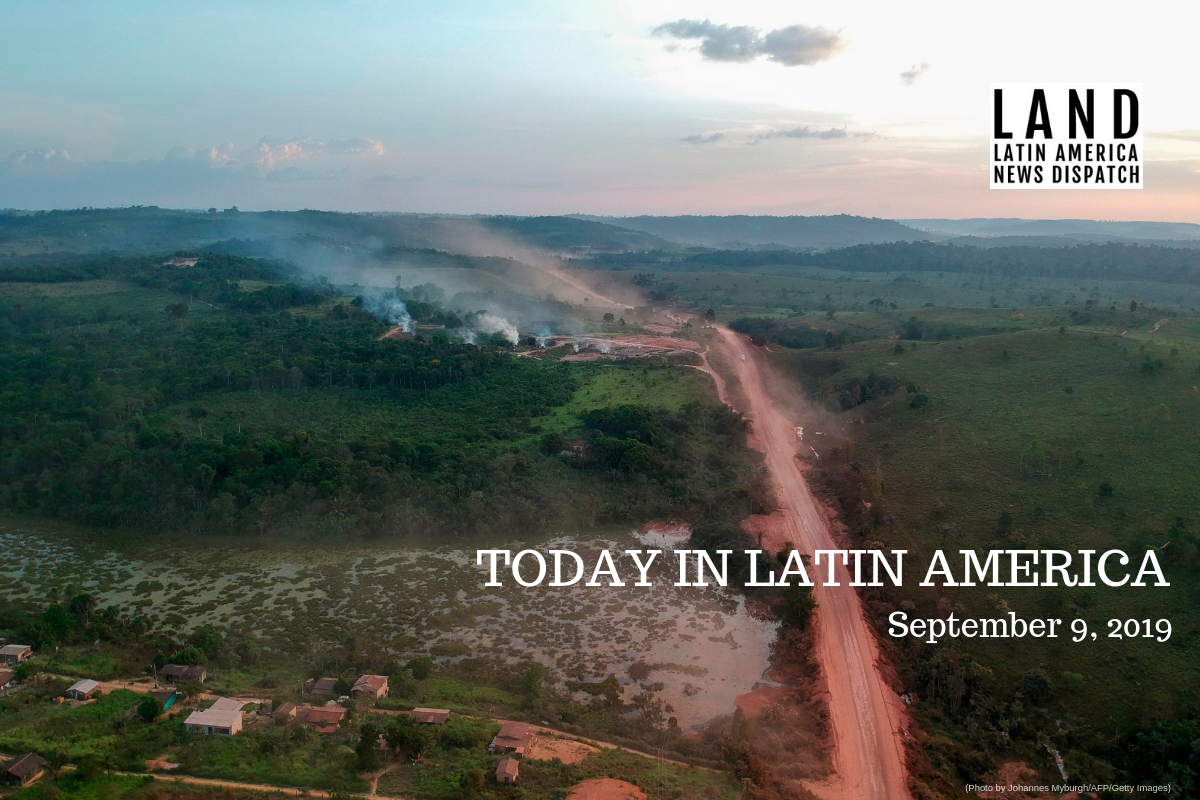 In this aerial view the red dust of the BR230 highway, known as "Transamazonica", mixes with fires at sunset in the agriculture town of Ruropolis, Para state, northen Brazil, on September 6, 2019. (Photo by Johannes Myburgh/AFP/Getty Images)

REGION: The presidents of Peru, Colombia, Ecuador and Bolivia joined leaders from Suriname, Brazil and Guyana Friday for talks about the future of the Amazon. The meeting was led by Colombian President Iván Duque, who called on the attendees to join him in combating deforestation and increasing rainforest protection. The leaders agreed to and signed the Leticia Amazon pact, which encourages resource sharing, cooperative action and the participation of Indigenous groups. “When a brother country needs help, we should all do our best to help in these emergencies,” Duque said.

Brazilian President Jair Bolsonaro did not attend the summit and joined by video conference instead, citing poor health (Bolsonaro underwent a hernia-repair surgery yesterday). However, on Saturday, Bolsonaro attended Brazilian independence day ceremonies where he announced, “The Brazilian Amazon is ours.”

PARAGUAY: Human bones were found this week on property previously owned by former dictator Alfredo Stroessner in Ciudad del Este. Locals discovered the remains while searching for buried treasure. The justice ministry’s department for historical memory and reparation announced that it would investigate the origin of the bones, specifically whether they belonged to victims of Stroessner’s dictatorship. Currently, authorities estimate that 423 people were killed or forcibly disappeared during the 1954-1989 dictatorship.

Neumann has since tweeted that she supports Venezuela’s claim to the Esequibo territory.

PUERTO RICO: Puerto Rican Governor Wanda Vázquez traveled to Washington D.C. yesterday in order to “restore the island’s credibility, improve communication and guarantee the government’s transparency” in the use of funds allocated to Puerto Rico. Vázquez, who will return to the island on Friday, said the trip’s goal is to accelerate the disbursement of funds for Puerto Rico’s recovery and essential services, such as education and health.

HAITI: In the culmination of a six-year legal battle, a defamation lawsuit against an activist who accused the founder of the orphanage Hearts With Haiti of sexually abusing children has been settled. The activist, Paul Kendrick, was originally ordered to pay $14.5 million to the charity after he accused the founder, Michael Geilenfeld, of molesting at least 16 boys. The ruling was overturned, and the orphanage will now receive $3 million in the settlement. Geilenfeld will not receive any of the payout.

NICARAGUA:  A group of Nicaraguan businessmen were allegedly attacked on Saturday with rocks, rubber bullets and metal pipes by a crowd of government supporters. José Adán Aguerri, president of the Supreme Council of Private Enterprise, said the businessmen were stopped by the police when motorcyclists assailed them. The businessmen had escorted home journalist Aníbal Toruño, who has been critical of Nicaraguan President Daniel Ortega and recently returned to the country after having spent almost a year in exile.

MEXICO: Mexican Foreign Minister Marcelo Ebrard announced on Friday that Mexico had successfully reduced the number of migrants detained at the U.S.-Mexico border by 56 percent. To avoid Trump’s threat of tariffs this May, Mexican officials previously negotiated an agreement to further crack down on migration. This August, the number of migrants apprehended at the border was 63,989, down from 144,266 in May. The director of the non-profit organization Sin Fronteras said that the agreement came at a high cost for Mexico, both in terms of expense to deploy the National Guard and the lack of safeguards to protect the human rights of migrants. Ebrard will meet with U.S. officials tomorrow.

MEXICO: Contemporary painter and sculptor Francisco Toledo died on Thursday, Sept. 5. Toledo, 79, was the country’s most renowned living contemporary artist. He was honored on Friday in a simple memorial at Bellas Artes in Mexico City, featuring photographs of the artist and some of his most famous works. Toledo was a champion of the arts in Mexico and had  donated his home in Oaxaca City to create the Graphic Arts Institute. He often took part in public protests, focusing on issues including cultural conservation, native corn and the disappeared Ayotzinapa students.

UNITED STATES: On Friday, the Trump administration issued new limits on the amount of money that Cuban-Americans can send to their family members in Cuba. The changes, which go into effect on Oct. 9, limit remittances to $1,000 per person per quarter. Money transfers to non-family members will be prohibited. However, there will be an exception for individuals and organizations in the private sector that are “independent of government control,” according to the State Department. The Obama administration previously lifted limits on family remittances in 2009. Trump has gradually reintroduced restrictions on travel and remittances to the island.