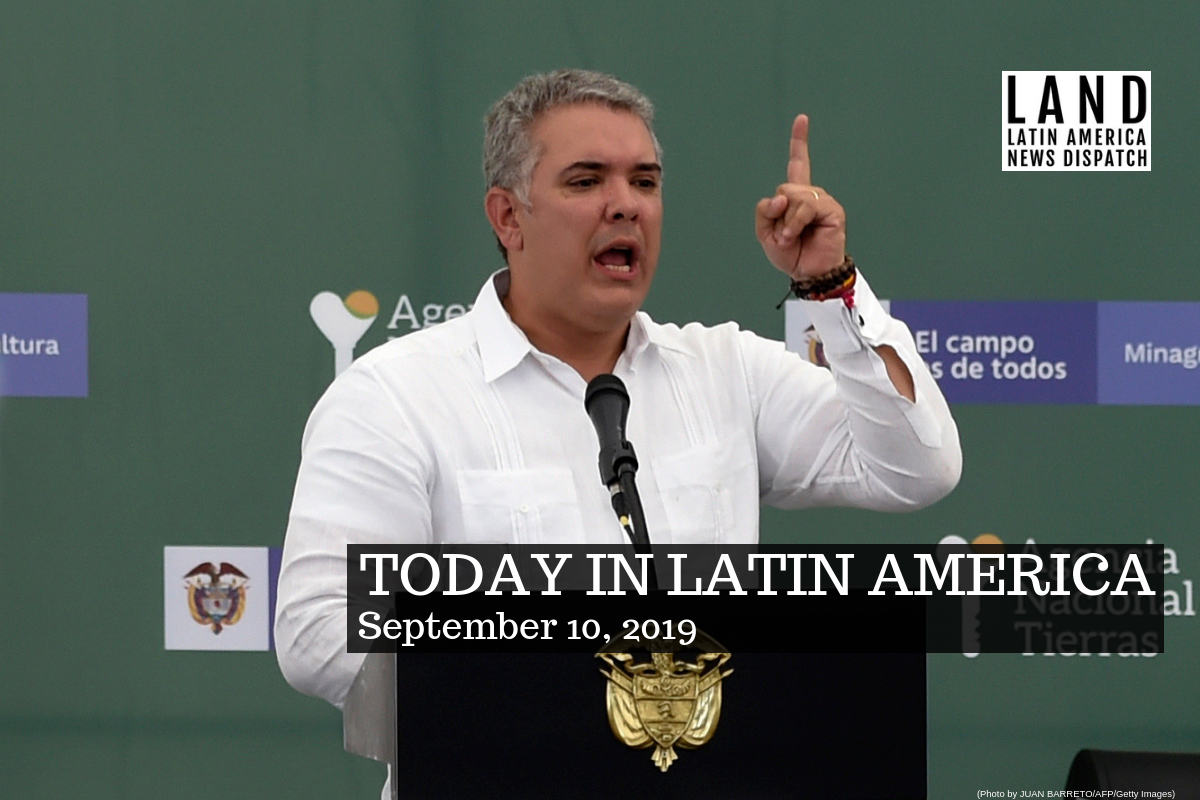 One of the documents within the report uses “Red Group” as a code referring to FARC guerillas, and it is signed by Remigio Ceballos, a high-ranking Venezuelan officer. Although international media has been unable to confirm the report, Colombian Foreign Minister Carlos Trujillo insists it is accurate. Trujillo said that the report is aligned with information his government has collected proving that Maduro has violated a UN resolution banning support for terrorist groups. Duque will present the information his government has collected to the UN General Assembly this month.

BRAZIL: The mayor of Rio de Janeiro, Marcelo Crivella, ordered a police raid to remove Avengers comic books that displayed a kiss between two male characters from an international comic book festival this past week. The festival’s organizers won an injunction to prevent the prohibition of the book. However, the ruling was reversed over the weekend when another judge stated that homosexual content for children should not be shown in public. The mayor’s actions generated an adverse reaction from publishing houses, festival organizers and Brazilian public figures.

ARGENTINA: Agrochemicals valued at $80,000 were stolen from a hangar in the Argentine city of Santa Fe this weekend. The chemicals belong to Norberto Rullo, an entrepreneur who specializes in aerial applications of the chemicals. Rullo said that in past months, as the Argentine peso has lost value, these types of robberies have happened more frequently due to the product’s higher price. According to authorities, the way in which the agrochemicals were stolen indicates that someone tipped off the robbers that the products were in a specific hangar.

CUBA: Cubans will collect signatures this week to show their support for Venezuela and its government. The effort is being organized by worker’s groups who have called for the United States to lift sanctions on Venezuela. Consuelo Baeza Martín, a member of the National Secretariat of the Central Worker’s Union of Cuba (CTC), said that the group is preparing a letter from the Venezuelan people to the Secretary-General of the United Nations asking the UN to condemn the U.S.’s “aggressive policies.”

NICARAGUA: President Daniel Ortega’s administration rejected claims in a new UN report that his government has repressed the people of Nicaragua and violated human rights. In the report, former Chilean President and UN High Commissioner for Human Rights Michelle Bachelet said that arbitrary arrests, limitations on protests and uses of the judicial system against government opponents have persisted since 2018, when the Ortega administration banned the United Nations’ human rights commission from the country.

GUATEMALA: The Guatemala-based Isabel Claudina alert system announced that 2,008 women were reported missing between Aug. 6, 2018, and Sept. 6, 2019. According to the country’s Attorney General’s office, four women go missing on average every day in Guatemala. While more than 1,400 cases reported to the Isabel Claudina system have been closed, another 465 remain open. This weekend, Guatemala’s Public Ministry thanked the Isabel Claudina system for helping authorities locate a missing woman one day after her disappearance.

MEXICO: New regulations limiting the amount of hard alcohol that boats are permitted to carry along Mexico City’s Xochimilco canals took effect this weekend after a drowning last week. Officials limited the amount of alcohol boats may carry to one liter of hard alcohol or three beers per person and also banned people from jumping boat-to-boat or standing while the boat is moving. The policy change comes after six drownings since 2005 and 16 incidents of people requiring rescue from the water in 2019 alone. Local business has fallen by about 80% as a result of the drownings, but the new measures were enacted to create a calmer and safer atmosphere.

MEXICO: Hundreds of people marched silently in Mexico City on Sunday to demand safety and justice for women in the country. Crimes against women throughout Mexico are notoriously high. In 2018, a reported 3,580 women and girls were murdered in Mexico. As of 2019, the number has already reached 1,835 women.

The National Citizen’s Observatory of Femicide coordinator María de la Luz Estrada told the AP that an average of 10 women are murdered daily in Mexico, most following a sexual assault. Currently, only 10 percent of these criminal charges turn into prison sentences. Family members of these victims took to the streets over the weekend to advocate against these injustices.

MEXICO: Mexican President Andrés Manuel López Obrador has proposed a fiscal budget for this upcoming year, which furthers his dedication to social spending, with a particular focus on children and the elderly. The budget would also direct more resources to the state-owned oil company, Pemex. Analysts see the proposal of 6.1 trillion pesos ($312 billion) as optimistic, since the budget assumes huge economic and oil production growth within the country this next year. The budget would allocate 46 billion pesos ($2.4 billion) to the company and 40 billion pesos ($2 billion) worth of tax breaks. The proposed budget predicts next year’s oil exports to be 2% higher than 2019 levels.