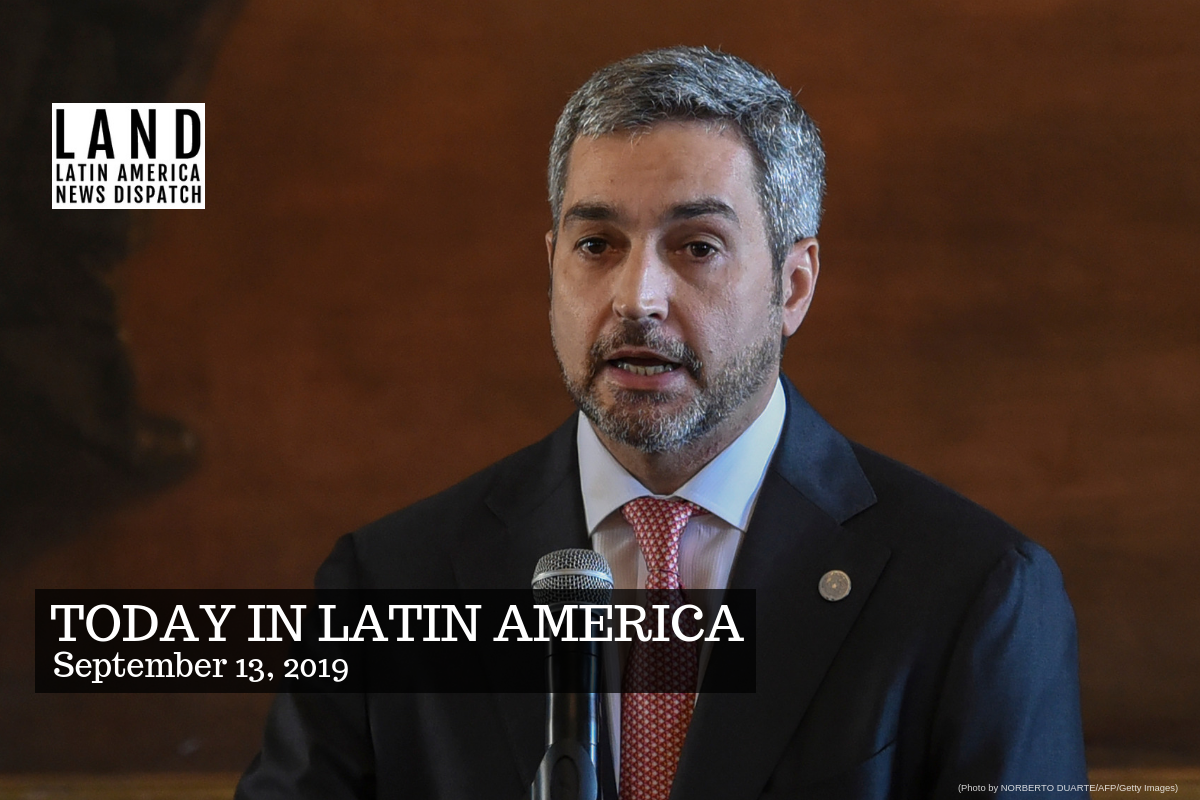 PARAGUAY: Yesterday, President Mario Abdo Benítez announced plans to amend the constitution to give the military a larger role in combating Brazilian gangs operating in the country. The announcement comes after an alleged drug trafficker from Brazilian gang Comando Vermelho (Red Command), escaped custody in a shootout.

Justice Minister Julio Javier Ríos submitted his resignation and national police chief Walter Vásquez was fired as a result of the escape. President Benítez announced both their departures on Twitter, where he also added that the country needed to strengthen its armed forces.

The proposed amendment has drawn concerns for civil liberties from the opposition and NGOs.

BRAZIL: Fires in the Cerrado region, a tropical savannah that covers more than 20% of the country, outnumber the raging flames in the Amazon rainforest, according to data published Wednesday by the National Institute for Space Research. In the first 10 days of September alone, the agency reported 8,012 fires in the Cerrado region and 7,457 fires in the Amazon region. The European Space Agency, earlier this week, released a series of images that show the increase of carbon monoxide in the air as a result of the flames.

PERU: Yesterday, supreme judge Susana Castañeda reduced Keiko Fujimori’s temporary custody from 36 to 18 months. The leader of the conservative Fuerza Popular party has been in preventive custody since late 2018 when another judge considered that Fujimori might interfere with the investigation against her for allegedly accepting illicit funds from Brazilian conglomerate Odrebecht while she was a presidential candidate. Fujimori was a senator between 2006 and 2011, and is the daughter of former president Alberto Fujimori, who was convicted for human rights violations.

CUBA: Twitter blocked the accounts of major Cuban Communist Party members and state run media journalists on Wednesday, leading to an outcry of “massive censorship” by the Cuban Union of Journalists. Communist Party leader Raúl Castro, his daughter Mariela Castro and the official account of the Cuban Communications Ministry were among those affected. A spokesperson for Twitter said accounts are blocked due to the company’s platform manipulation policy which prohibits users from artificially amplifying or disrupting conversations by using multiple accounts.

BAHAMAS: UN Secretary General António Guterres is traveling to the Bahamas today to show support for victims of Hurricane Dorian. In a press conference yesterday, Guterres expressed his desire to raise awareness of the island’s need for relief, as well as draw attention to the impact of climate change on natural disasters. “Climate change is running faster than we are,” Guterres said, “and we need to have a much more ambitious approach in what we do in order to defeat climate change.”

EL SALVADOR: A contingent of 800 police and other security forces have been deployed to El Salvador’s borders, as part of a new policy to regulate migrant smugglers and other illegal crime. Justice and Public Safety Minister Rogelio Rivas discussed the initiative on Thursday, after announcing that another 300 immigration officers would join the police to monitor blind spots along the border. The efforts are part of El Salvador’s agreement with U.S. Homeland Security Secretary Kevin McAleenan to help stop the flow of migrants through Central America.

U.S.-MEXICO BORDER: Yesterday, the Mexican government announced that it disagrees with a U.S. Supreme Court order that blocks migrants from applying for asylum if they passed through another country on their way to the U.S. “The court’s decision is astonishing in the impact that it is going to have,” Mexican Foreign Secretary Marcelo Ebrard said during the daily morning press conference. On Wednesday, the Supreme Court ordered that the rule by the Trump administration could be enforced while its legality is appealed in the lower courts.

MEXICO: The Internal Affairs department of the Department of Public Safety of Tamaulipas said it has suspended the officers who were allegedly involved in the extrajudicial executions of eight people on Sept. 5 in Nuevo Laredo, according to Animal Político. On Tuesday, the Human Rights Committee of Nuevo Laredo rejected the state’s position that the event was a police confrontation. The government of Tamaulipas said on Twitter that it was committed to transparency in the investigation process.

MEXICO: Parents of the 43 missing Ayotzinapa student teachers criticized the administration of President Andrés Manuel López Obrador (AMLO) after a meeting with the president on Wednesday over the lack of progress in the investigations over the 2014 disappearance of students in Iguala, Guerrero. The parents’ complaints included the “slowness” of choosing a new special prosecutor of the case, who was appointed in June, which parents say delayed investigations.