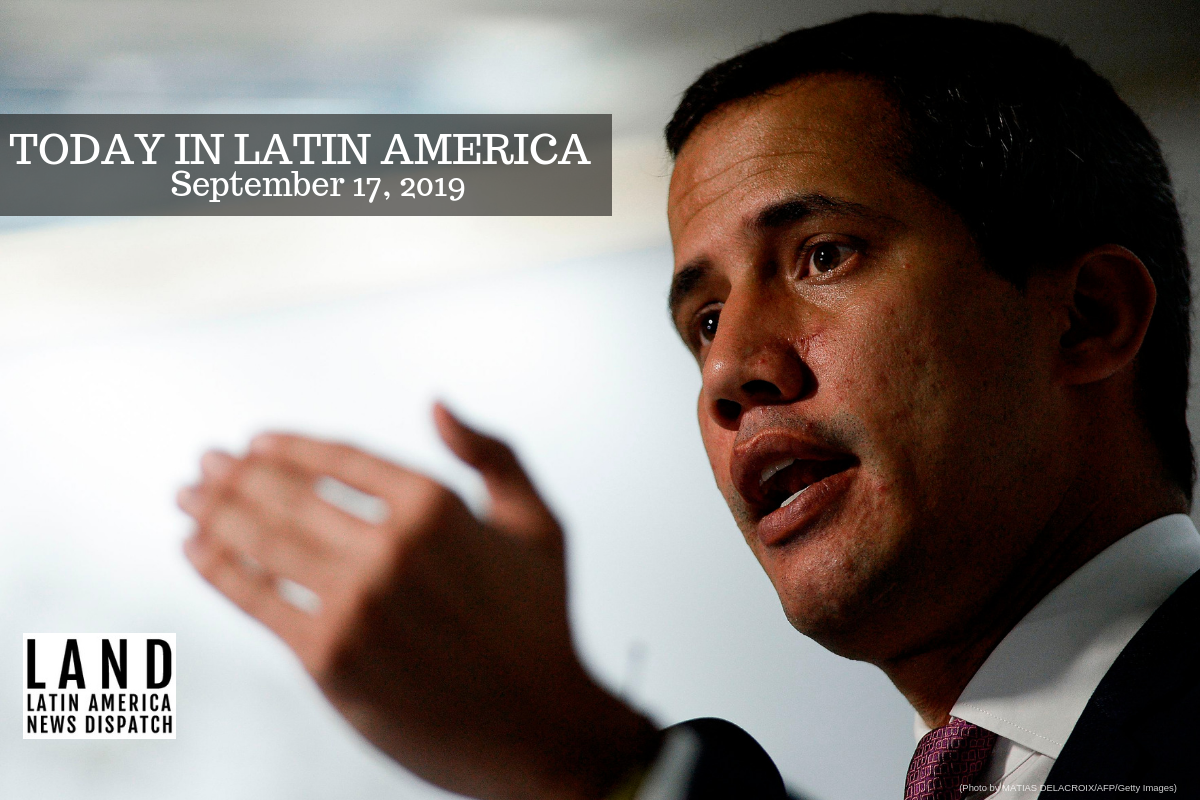 Juan Guaidó speaks during a press conference in Caracas on September 16, 2019. (Photo by MATIAS DELACROIX/AFP/Getty Images)

VENEZUELA: Yesterday, a minority group of the already divided Venezuelan opposition agreed to negotiate with President Nicolás Maduro. Opposition leader Juan Guaidó has not agreed to participate in the talks. The agreement focuses on reforming the country’s electoral board and improving relations between a pro-government assembly and the opposition-controlled congress.

The minority group, which represents less than 10% of the seats held in the National Assembly, signed the agreement while appearing on state television. At a separate event yesterday, Guaidó fired back saying that these negotiations are a plot by Maduro’s government to further divide members of the opposition.

US-MEXICO BORDER: The Trump administration announced this week that it is planning to build 450 to 500 miles of fencing along the 2,000-mile U.S.-Mexico border by the end of 2020. In Arizona, construction of a 30-foot wall has begun. Currently, the Pentagon has begun construction on two wall segments: one in New Mexico and the other in Arizona. A project in Yuma, Arizona aims to account for the increase in the number of families seeking asylum crossing into the U.S. from Mexico. The Trump administration still faces significant opposition to border wall construction from landowners, environmentalists and the Cocopah and Tohono O’odham Native American tribes in Arizona.

UNITED STATES: Yesterday, the United States opened immigration courtrooms in tents in two Texas cities: Brownsville and Laredo. An immigration judge in a brick courthouse in San Antonio will hear the cases of migrants via video conferencing. The courtrooms are closed to the public, except for journalists who may only enter the San Antonio courthouse. The majority of the immigrants whose cases will be heard in the tent courtrooms have been impacted by the “Remain in Mexico” policy.

UNITED STATES: A Spanish court has rejected a U.S. request to extradite former Venezuelan military intelligence chief General Hugo Armando Carvajal on the basis of drug-trafficking charges. Instead, the court has ordered his release. Carvajal, who served under Hugo Chávez for almost a decade, has been in Spanish detention since his arrest mid-April in Madrid. During his court hearing last week, the United States asked the Spanish court to extradite Carvajal because of his knowledge of Venezuela’s armed forces. Carvajal faces up to 10 years in prison and the full judgment on his case will be released today.

HAITI: Haitian Senator Youri Latortue accused Prime Minister Fritz William Michel of overbilling the sale of goats to the state as part of an agricultural project. Michel allegedly sold 200 goats for $65,000, which Latortue said did not match normal prices. Latortue said the goats were sold through a company Michel owned between 2017 and 2018 while he was a senior official in the Ministry of Economy and Finance.

PANAMA: The Sixth Anti-Corruption Prosecutor’s Office announced yesterday that an investigation into the company Blue Apple revealed $78 million in money laundering, of which $25 million has been recovered. The case centers around the creation of the Blue Apple company to funnel bribe money and accelerate state contracts. So far, 50 people have been accused of money laundering and 10 have been accused of corruption of government officials.

HONDURAS: Protesters demanded the resignation of President Juan Orlando Hernández and clashed with riot police during Independence Day celebrations in Tegucigalpa on Sunday. Former President Manuel Zelaya led the protests and called the current administration a “criminal dictatorship.” U.S. prosecutors have previously accused Hernández of accepting money from drug cartels to finance his election campaign in 2013 while protesters called his re-election in 2017 fraudulent.

ECUADOR: The Ecuadorian marketing and analytics company Novaestrat made available online personally identifiable information of 17 million Ecuadorians, including the information of 6.7 million minors. This major data breach could have allowed criminal gangs to perform robberies and identity thefts. Ecuador’s Computer Emergency Response Team removed access to the information once it was alerted by reporter Catalin Cimpanu, who broke the news of the data breach on ZDNet’s website.