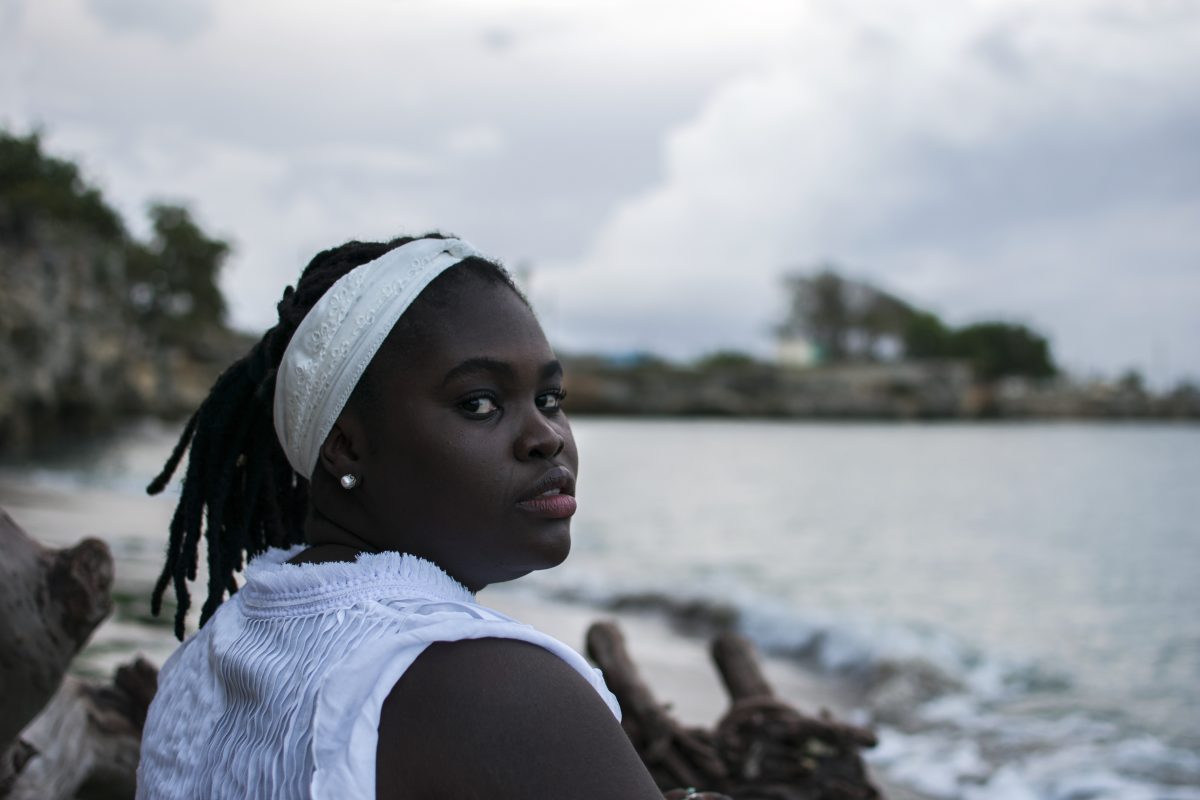 Daymé Arocena’s voice is one of the most powerful and captivating on the scene. With vocals that are hypnotizing and a vibrating confidence that radiates across the stage, the Cuban jazz artist has captured the souls of those tuning into her music. This month, she dropped her album Sonocardiogram, where she bares her heart for listeners with a celebration of love and santería.

“This record’s intention isn’t to make people happy, it’s very intimate,” Arocena told Latino USA, “I know that what I share in that record are feelings that can be shared by many. They’re very intimate concepts, but also universal.”

The album, produced by Arocena and her Havana-based band, is a dive into Afro-Cuban jazz, starting with three songs dedicated to the santería goddesses Oyá, Oshún and Yemayá, before turning to themes of love. The genre is tinted with nostalgia, and Arocena  leans into its spontaneity—recording in an unconventional studio in order to stay true to jazz’ live-stage essence.

“All of the musical production was done by us. It felt very familiar and yet it was a process of personal self-discovery and collective discovery,” she said.

Her previous album, Cubafonía, was a compilation of popular Afro-Cuban music, delivered with a talent that mirrored that of past Cuban women who obtained international acclaim, like La Lupe and Celia Cruz. Yet while Arocena pays tribute to roots music (and these very artists like in a song where she makes a plea to La Lupe), she is giving Cuban folklore new life and set to make her claim in the world of Latin music at large. In Sonocardiogram, the 27-year-old continues to leave her mark and share her own power and uniqueness, it is now up to the music industry and audiences everywhere to witness it.

Arocena spoke with us at Latino USA about her trajectory thus far, her music-making process, her personal life and what inspired her latest creation.

Amanda Alcántara: Okay, so let’s start off with the music recording process. You’re in Havana right? Do you make music out of there? And who do you work with?

Daymé Arocena: I’ve worked with the same band for about four years. It’s a band of Cubans who live right here in Cuba, and all of our productions are out of here.

AA: How did you begin making music?

DA: So I started singing when I was very little. My parents noticed my inclination towards art and music, so they had me singing in a community chorus in the community Diez de Octubre, which is where I’m from in Havana. They also had me take piano lessons and all these other things to prepare me to start music school when I was 10. I began studying music in the Conversatorio Alejandro García Caturla from the age of 10 to 15. Then I passed on to the Conservatorio Amadeo Roldán. And that’s more my academic formation. I studied chorus direction so I’m basically a chorus leader but I don’t practice that often.

AA: I listened to your album, Sonocardiogram and I loved it. When I was little, my mom would always take me to these Latin jazz concerts in the Dominican Republic, though they were small and local. Jazz is not really part of the so-called folklore of our Caribbean countries but it actually is part of us, of the Caribbean and it has a way of waking the spirit.

DA: Yes, especially because you have the tool of improvisation which let’s you approach a song in different ways each time. The song you performed today, there’s no reason for it to sound the same tomorrow because the interruption gives you elements to change or transform the song, every time you play it.

AA: That’s right! And you can listen to the public or what’s happening in the room and be led by that too.

DA: Yes, the public influences your interpretation of the piece, and so does each musician who is part of the interpretation. For example, when I’m singing, I can’t sing while being distant from my musicians or band members. I have to pay attention to everything that they’re doing, and that gives me information and elements about how I will perform the song. I myself am an element too.

AA: So then, knowing that jazz is spontaneous, what’s your recording process?

DA: We have used very conventional methods, for the most part, but with this last album, we decided to break some rules of the game and use a home studio that was improvised. So it wasn’t a recording studio per se. It was a painting studio that is now a local rehearsal space belonging to a Cuban family, la familia López. We would hear dogs and cats while we recorded and I don’t mean that in a derogatory way, quite the opposite. It was interesting that we weren’t recording somewhere isolated like when you record in a studio and can only hear yourself. That’s like being in a bubble, and our intention was to shift that and be more connected to the environment because jazz also lives and breathes through that.

AA: Now that you mention discovery process, the album feels like it comes in two parts, it’s a spiritual praise and a praise to love. Did you ever feel scared of sharing such intimate parts of yourself?

DA: No. I’m very spontaneous and very open, and I’m not afraid of opening my heart for others. Why would I? I’m not foreign to what human beings experience. I feel blessed because all of these negative or positive experiences have always given me inspiration for a new song. So I’d say the opposite, I feel like a keeper and like a channel of inspiration. I know there are many musicians who don’t like to do songs that talk about emotional or intimate subjects but I feel that it’s my mission to put out music that life and the spirits have given me. I believe that that’s why they chose me. In the end, music is a universal language and my story could serve as inspiration or help for someone with a similar experience.

AA: Let’s talk about the first part, the “Trilogía” (“Trilogy”) which are three songs to Yemayá, Oshún, and Oyá. Why did you choose to release those first and what has it been like to share that part of yourself?

DA: My music has always been inspired by folkloric Cuban music. Of course, how I view religion doesn’t have to be the same way my parents, or friends or even my godmother sees it. Every person sees religion differently. I fell brutally in love with religious music before I became a practitioner. I discovered religious music when I was 17. At that age was when I actually wrote “Trilogía” and it became my first time approaching folklore from the perspective of classic music. That’s why I chose to incorporate it in this album, because Sonocardiogram is a record where I speak from the bottom of my heart. Sound is what makes my heart keep beating. To talk about my essence, I had to talk about what inspires me the most, which is folkloric music, with all of its diverse rhythms and melodies, and its complexities and mysteries.

I took the leap into practicing religion at 22 years old. So it took me around five years to go from loving the music, to loving the spiritual practice and the religion. It’s transformed the music I did before and the one after.

AA: In the second part of the album, you have songs like “Porque Tú No Estás” (“Because You’re Not Here”) and “Para El Amor: Cantar” (“For Love: Sing”). Where did you draw inspiration for those?

DA: These songs are from five different phases in my life. Each song touches on a relationship that didn’t work out. And each song tells a story, no? From the Daymé who I was a few years ago to the Daymé I am now. There are songs like “Porque Tú No Estás,” which I wrote about five years ago and I finished it for this record. “Para El Amor: Cantar” is a song about break-ups, but from the position of “Why am I stuck feeling this way? I don’t need to give into this feeling, the only thing I need to do is sing and be happy.” It’s an ode to women, women who give so much to relationships and sometimes it doesn’t work out. Almost like saying, “If it didn’t work out, there’s more paths, dance, and have fun.” (laughs)

The last song is one where I say I’m not going through this anymore. And I partly sing it to my husband, who I married a few months back, and I feel happy and I feel like I’m in a comfort zone that I’ve never been in before. And that’s why in the song I say, “I need you more than ever.” Sometimes in our relationship, I have reactions that are defensive, and he has to tell me “I’m not one of the men in your past.”

AA: Right now, we’re in a time where people are talking about the lack of representation of Afro-Latinas in music. And it’s interesting because in the past we did have women like Celia Cruz and La Lupe. How do you feel knowing that there’s women who look to you as that needed-representation of black women in music?

DA: First, I will say that I’m happy that this movement is happening. I’m not a leader, and there’s women who came before me, like you said, Celia Cruz. There’s even Omara Portuondo, Angélique Kidjo, Concha Buika. There’s too many beautiful black women making phenomenal music.

My advice is that we should never get into a comfort zone. I’m all about supporting women who look like me and who need space in society. But I always make clear that I don’t like that women think that just because we’re women and we’re black, that we need to be given everything—that makes me feel as if because we’re women and we’re black then we’re lesser than, as if we’re less intelligent, less musically talented, less attractive and that we have to make a lesser effort.

Almost as if we’re limited and that that limitation won’t allow us to reach the place where other women or men of other skin colors are artistically. I’m all about studying, all about personal growth. I support everyone who wants to fly and who wants to make music but they have to do it well. You have to work and you have to study for that, and that’s how you’ll get my unconditional support. I would never want to undervalue the music and work of my colleagues from Nina Simone to the youngest girl being born today. Women, we’re talented and ingenious and as creative as men. So we have to realize that we have to win through our creation, our talent, and our culture—beyond our skin color.

AA: What do you hope comes of this album and this new project?

DA: This baby is now born, and what I hope is that people open their hearts to the album just like I opened my heart to people.

I hope whoever takes it home will also carry it through their lives.