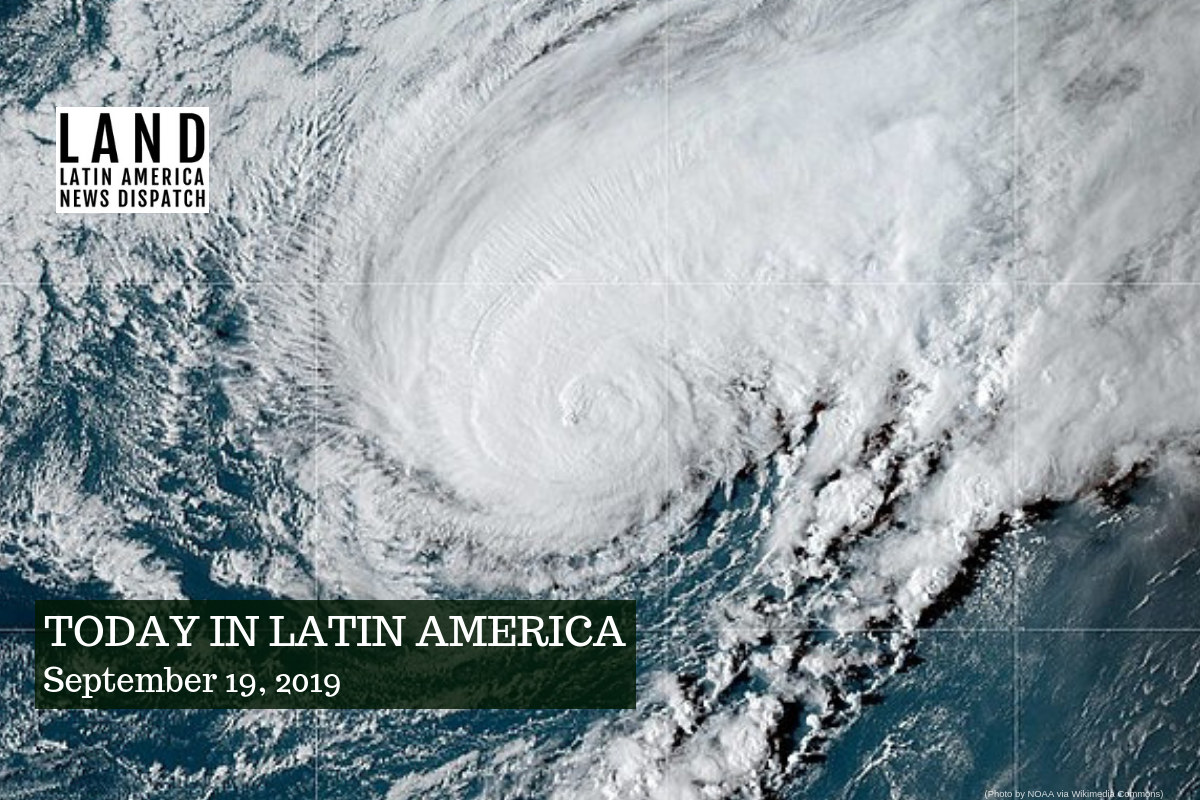 BERMUDA: Bermuda braced for Hurricane Humberto as the category 3 storm passed 100 miles north of the British territory. With reports of strong winds of up to 104 mph across the island and forecasts of up to 6 inches of rain, Governor John Rankin urged residents to stay indoors and ordered early closings of schools, clinics and government offices. The director of the Bermuda Weather Service expected the storm to pass as close to the northern coast as 80 miles last night, which could produce tornadoes and floods. The hurricane was expected to lash the island until early this morning.

ARGENTINA: The government approved a 4 percent hike in gas prices, which will go into effect today. According to the Ministry of Energy, the price change is a result of the increase of oil prices due to attacks on oil infrastructure in Saudi Arabia. Argentina is facing economic and political unrest as exchange rates continue to drastically increase. The current exchange rate is more than 56 Argentinian pesos per U.S. dollar.

BRAZIL: Five people have been accused of obstructing the investigation into the murder of politician Marielle Franco. Among those accused are two court officials and two police officers. Prosecutor Raquel Dodge claims the accused attempted to prevent investigators from identifying what criminal group was responsible for Franco’s death. Franco had been critical of police raids in rural areas of Brazil and paramilitary groups before being shot by an unknown shooter in Rio de Janeiro last year. The motive for the murder has still not been determined.

VENEZUELA: A Venezuelan police group has been targeting and killing young men in poor neighborhoods, according to the nonprofit Human Rights Watch. The group has documented nine cases involving the torture and murder of young individuals. The killings are believed to be part of the efforts of President Nicolás Maduro’s administration in going after opposition groups and leaders. Edgar Zambrano, a deputy of opposition leader Juan Guaidó, was recently released from detention after being detained since April. Zambrano said he was “kidnapped and almost annihilated” for “thinking differently” than the Maduro administration.

ECUADOR: Pro-choice demonstrators and police clashed outside Ecuador’s national assembly after lawmakers rejected a bill that would decriminalize abortion in all cases of rape. Abortion is currently illegal in Ecuador except for cases where the life of the mother is in danger or if the pregnancy resulted from the rape of a woman with mental disabilities. Activists say the alarming number of rapes in the country will continue to put women’s lives at risk. Illegal abortions accounted for more than 15% of maternal deaths in 2014.

EL SALVADOR: Bianka Rodríguez was awarded the UNHCR Nansen Refugee Award for her commitment as an advocate of the LGBTI and trans communities in El Salvador. As the regional winner for the Americas, Rodríguez was chosen for her work as president and executive director of COMCAVIS Trans, a Salvadoran NGO dedicated to shining a light on trans issues and establishing support networks within the Salvadoran trans community to ensure trans individuals are aware of their rights. The award is given to individuals and organizations who “go to extraordinary lengths to protect refugees, displaced and stateless people.”

U.S.-MEXICO BORDER: President Donald Trump’s 30-foot border wall could destroy archaeological sites in Arizona. According to an internal National Park Service report, the destruction of up to 22 historical sites will take place within the coming months. U.S. Customs and Border Protection hopes to accelerate the process so that 500 miles of barrier are completed by next year’s election. New construction within Arizona’s Organ Pipe Cactus National Monument began last month, despite being one of the busiest areas for migrant border crossings. Environmental groups will continue to fight against construction in protected areas.

MEXICO: A shooting in Mexico City has resulted in the killing of four men and the wounding of three women and a 7-year-old girl. Prosecutors say a woman and a 14-year-old boy are among four arrested suspects. The shooting allegedly occurred before dawn Wednesday in a downtown low-income neighborhood. The prosecutors’ office says the suspects were carrying two guns and a bag of marijuana.

MEXICO: Mexico was unable to stop a pre-Colombian art auction in France. Yesterday’s collection included around 120 pre-Hispanic artifacts, ranging from clay fertility figurines to pottery. A French couple began the collection in the 1960s, but Mexico passed a law in 1972 banning the export of said artifacts. Mexico said some of the artifacts are fakes and others are emblematic of the country’s cultural ancestry. Mexico’s ambassador to France, Juan Gomez Robledo, said, “We will take the necessary actions to stop this sale.”