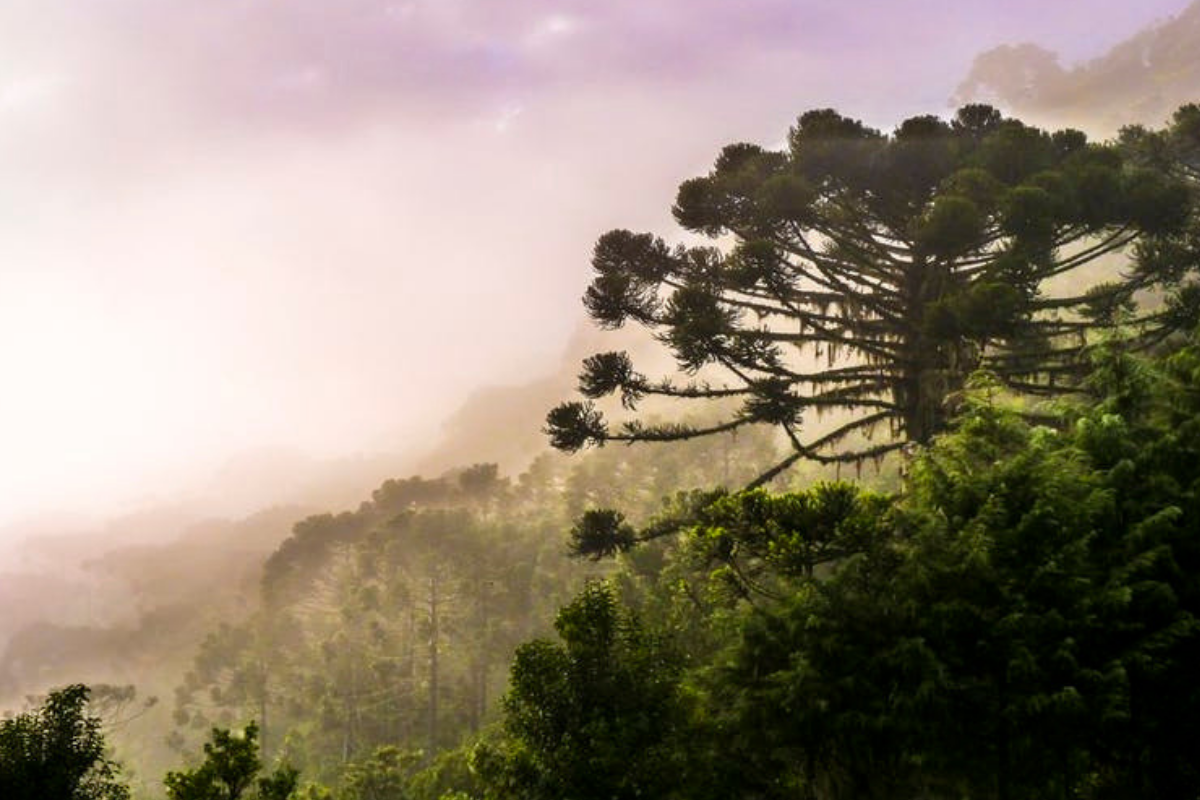 By Oliver Wilson, University of Reading

For hundreds of thousands of years, the distinctive candelabra shapes of Araucaria trees (Araucaria angustifolia) have defined landscapes at the southern edge of Brazil’s Atlantic Forest. Humans have never known a world without these majestic evergreens. But my new research, conducted with colleagues in Brazil and Reading, suggests that their extinction could be just a generation or two away.

At a glance you might mistake Brazil’s Araucaria for its sister species, the monkey puzzle tree found in Chile and Argentina. But the two have inhabited South America as separate species for aeons, after diverging some 28m years ago. If you compressed those 28m years into 24 hours, North and South America wouldn’t become one land mass until 9.30pm. Humans wouldn’t appear until 11.45pm. These are truly ancient plants.

Araucaria trees have been revered for as long as humans have lived in southern Brazil’s highlands. Their starchy, nutrient-rich nuts (known as pinhão) underpinned the diets of indigenous groups before European arrival, especially in times of scarcity.

The trees also hold great cultural importance. For example, the Kaingang people’s Kikikoi funerary ritual requires Araucaria knots to keep bonfires burning, Araucaria ashes for face-painting, and a trough made of an Araucaria trunk to hold Kiki, a fermented honey drink. The Xokleng people even used to define the boundaries of a year by the coming and going of pinhão.

Today, pinhão are a regional delicacy, with trade worth millions of dollars a year and an annual festival held in their name. But while Araucaria trees are now most valued for food, it was their excellent timber that led to their downfall. Brazil’s strong economic growth in the 20th century fuelled an unsustainable demand that ultimately consumed an estimated 97 percent of the country’s Araucarias. In our 24-hour 28m years, the species crashed from widespread to “Critically Endangered” in a third of a second.

Sadly, the short-sighted culture of consumption that drove Araucaria’s dramatic decline hasn’t gone away: human-caused climate breakdown is now threatening to tip the species into extinction. Araucaria trees are adapted to relatively cool, constantly moist conditions—conditions that are disappearing as the planet heats and normal rainfall patterns become disrupted.

Using data on current and predicted temperatures and rainfall, as well as high-resolution maps that include small-scale terrain features, we modeled the likely fate of Araucaria in the coming decades. We found that projected climatic changes are likely to significantly loosen Araucaria’s grip on its current strongholds in southern Brazil. Our most optimistic scenario predicts an 85 percent loss of the tree’s most suitable habitat by 2070, and several scenarios predicted that this habitat would vanish altogether.

Though these findings are worrying, we were able to identify some potential “microrefugia” for the Araucaria—areas where the trees have at least a three-in-four chance of enduring long into the future. These are mainly found in colder spots in the landscape – places like sheltered slopes or river valleys where cool, moist air will continue to gather, even as the wider region becomes more inhospitable.

Unfortunately, the legacy of past destruction means that more than a third of these areas have already been deforested, built on, or converted to agriculture and timber plantations. Only 2.5 percent of the remaining area is under any sort of protection—most of it in just two national parks. With the current Brazilian government’s push to loosen environmental protections in pursuit of quick economic gains, these areas may not remain safe for long.

While none of our findings are good news for Brazil’s Araucaria, it isn’t necessarily doomed. There are steps that we can take to ensure its continued survival in Brazil’s southern highlands.

Clearly, all of us need to combat climate change and rein in the consumption which drives it. Beyond that, actively protecting Araucaria forests from unsustainable exploitation is a top priority. This means keeping existing protected areas safe and creating new ones – especially where microrefugia are vulnerable to damage. It also means working with private landowners outside these areas. While Araucaria forests are better protected in conservation areas, traditional methods of grazing cattle or producing maté tea under the forest canopy can support livelihoods without significant damage to Araucaria populations.

And for truly long-term conservation planning which looks beyond the next decades, or even the coming centuries, we could learn a lesson or two from the past. Evidence suggests that indigenous people helped Araucaria forests expand beyond their natural boundaries around 1,000 years ago, although how and to what extent isn’t yet clear. Investigating how millennia of climate change and centuries of human actions combined to shape the present-day Araucaria forests may reveal ways of helping them survive the grave challenges of the coming decades.

We are living through the most turbulent point in the long history of Brazil’s Araucaria. Our actions in the next split-second of its 24-hour life will determine whether or not future generations have the chance to treasure this ancient icon.