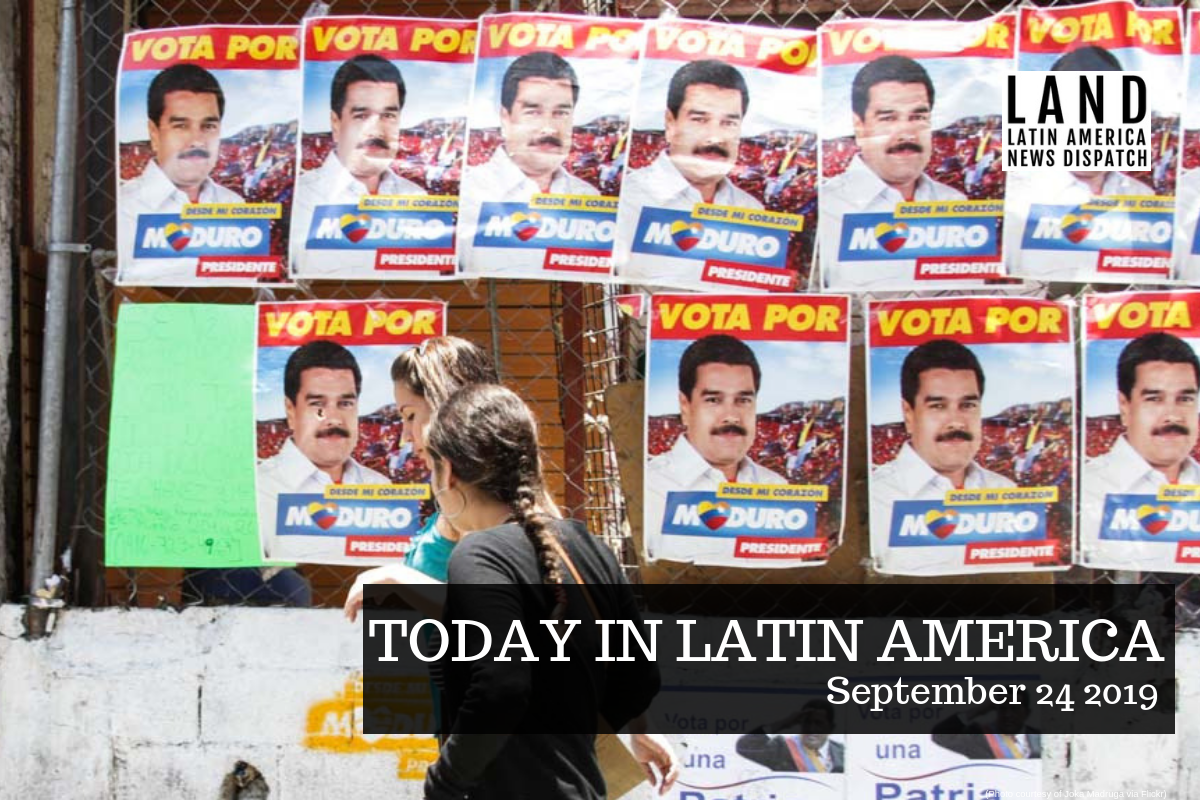 UNITED STATES: Yesterday, the United States and over a dozen Latin American countries met in New York alongside the United Nations’ General Assembly to discuss the possibility of multilateral sanctions against President Nicolás Maduro’s government in Venezuela. The sanctions would take the form of a regional mutual-defense treaty.

For the pact to be invoked, at least 13 votes will be needed. President Donald Trump is expected to join the talks tomorrow. Some leaders, such as Colombian President Iván Duque, are accusing Maduro of committing crimes against humanity and for potentially harboring terrorists.

BRAZIL: On Sunday, 8-year-old Ágatha Vitória Sales Félix was shot by police in a Rio de Janeiro favela. The police hit her by mistake while targeting an unarmed motorcyclist. Critics say police have increasingly targeted Rio’s poor neighborhoods since Gov. Wilson Witzel came into office in January. Demonstrations have broken out across Rio in response to the death of Sales Félix and the 1,249 other victims of police raids in Rio this year.

ARGENTINA: The Argentine financial crisis has particularly affected Chubut, a province that produces $400 million from oil revenue annually, but now has $1 billion in debt. More than 61,000 public employees are not being paid, which represents 10% of the population in the area. However, Governor Mariano Arcioni, saw a salary increase five times higher than his initial paycheck. This significant increase, along with the mismanagement of funds, spurred protests from teachers and professors in the region. This adds more pressure to Mauricio Macri’s government as elections approach in October.

COLOMBIA: Yesterday, ex-combatants of Colombia’s rebel army admitted to kidnapping politicians, soldiers and civilians during the country’s civil conflict. The former rebels provided written testimony at a special tribunal created by the peace process. The tribunal now faces the task of investigating and sentencing the war crimes. Most of the 9,700 ex-rebels will avoid prison if they provide a full confession. Many Colombians consider these terms too lenient as these kidnappings involved the disappearance and death of many of the victims.

NICARAGUA: At least 19 people have died from dengue fever in Nicaragua. The outbreak of the mosquito-borne disease is the worst that Central America has experienced in decades. The hardest-hit country is Honduras, where at least 135 people have died this year. Scientists said outbreaks like this could become more common due to climate change, as temperatures rise and rains become heavier.

PUERTO RICO: Gov. Wanda Vázquez canceled classes and closed public agencies on Monday as Tropical Depression Karen makes its way to Puerto Rico and could result in heavy flooding for the eastern region. The National Weather Service in San Juan said the island could expect between two and four inches of rain, and up to eight inches in isolated regions.

BAHAMAS: Prime Minister Dr. Hubert Minnis announced a new disaster preparedness ministry yesterday after the archipielago was devastated by Hurricane Dorian three weeks ago. The new ministry will focus on recovery and reconstruction to the island damaged by the storm. Iram Lewis was sworn in as the Minister of State for Disaster Preparedness, Management and Reconstruction and will be responsible for the day-to-day operations of the ministry.

UNITED STATES: A documentary about the life of Mexican-American union leader Maria Moreno, titled “Adios Amor: The Search for Maria Moreno,” will premiere on PBS on Friday. The film will examine Moreno’s life as a founding leader of the farm worker’s unions of the 1950s and 1960s and her disappearance in 1962. Director Laurie Coyle, who decided to produce the film after finding photographs of Moreno in an archive, hopes to highlight Moreno’s largely forgotten legacy.

MEXICO: The Natural Protected Areas Commission is planning to restrict access to the Cozumel Reefs National Marine Park, one of Mexico’s most popular tourist destinations, this October. Coral bleaching, which was first detected in Cozumel in 2014, has damaged a number of the park’s reefs. In August, ConAnp estimated that about 42 percent of the Mexican Caribbean’s reefs had been damaged by coral bleaching.