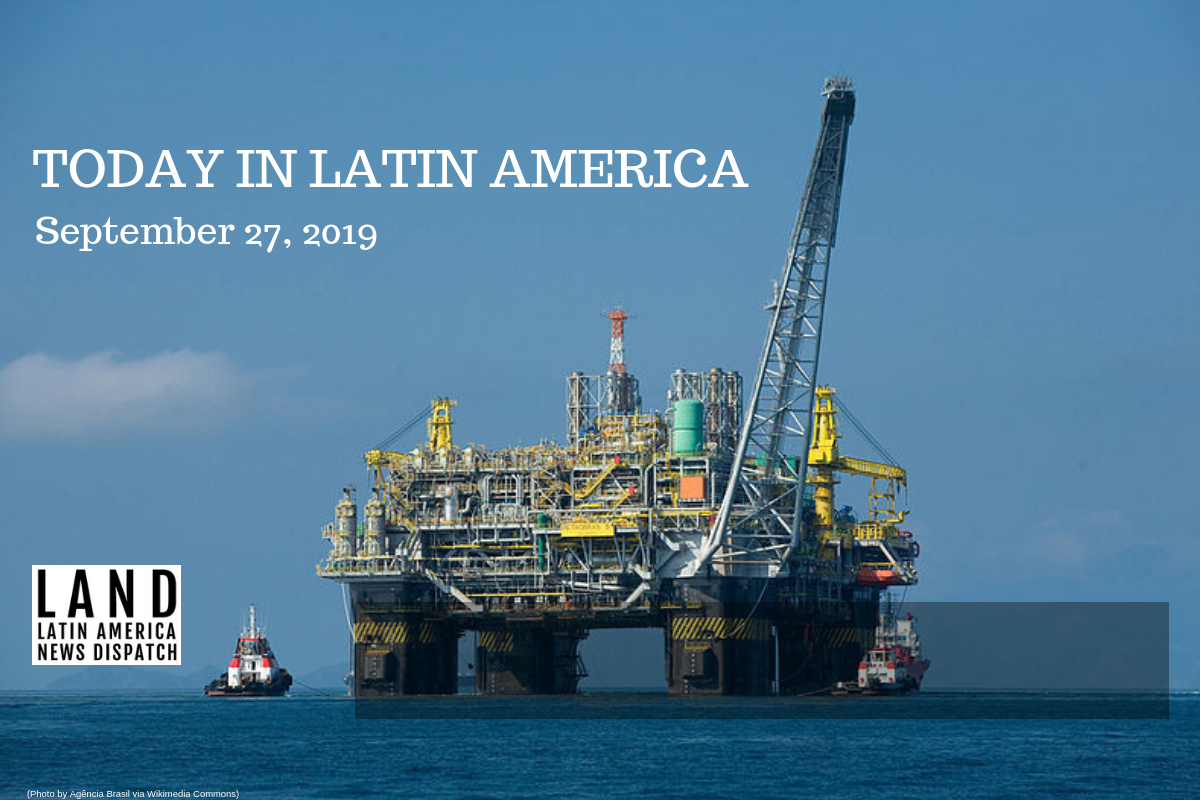 BRAZIL: Yesterday, Brazil’s Institute of the Environment and Renewable Natural Resources announced that it has identified 105 oil spills off the coast, with no source yet determined. Oil slicks have begun to appear near coastal Brazilian cities, and at least 46 cities have been affected by the spills along with popular beach destinations including Jericoacoara. The environmental institute along with state oil company Petrobras and the fire department in Brasilia are investigating the source of the spills.

In a securities filing Wednesday, Petrobras said it had tested oil from each spill and has found that the oil does not match that produced in Brazil. Around 100 Petrobras employees are assisting in clean-up of the beaches in the northeast region.

ARGENTINA: The International Monetary Fund will not confirm the timing of Argentina’s next loan disbursement. Argentina was due to receive $5.4 billion of the country’s $57 billion IMF loan in mid-September. However, at a press conference yesterday, IMF spokesman Gerry Rice said he could not share specific timing information when reporters asked whether the IMF would wait to disburse the loan until the winner of Argentina’s October elections takes office.

VENEZUELA: The Trump administration has barred top officials from President Nicolás Maduro’s government from entering the United States. On Wednesday, Trump ordered a travel suspension against those “responsible for policies or actions that threaten Venezuela’s democratic institutions.” The travel ban comes as the United States has sanctioned many of the same high-ranking officials in the Maduro regime.

EL SALVADOR: Salvadoran President Nayib Bukele began a speech to the United Nations’s General Assembly yesterday by taking a selfie. Bukele explained that the photo was a test: “Believe me, many more people will see that selfie, once I share it, than will hear this speech.” Bukele proceeded to urge the United Nations to adopt new technology and adapt to changing trends, like using video conferencing instead of hosting in-person assemblies.

COSTA RICA: Costa Rica is on track to generate over 99 percent of its energy from renewable resources this year. The country’s government reports that the state has produced 98.84 percent of its energy from renewable resources so far this year, and expects to increase that number to over 99 percent by the end of the year. If it does so, Costa Rica will have run on over 98 percent clean energy for the fifth year in a row. This year, the majority of Costa Rica’s energy has come from hydropower, with smaller amounts from wind, geothermal, biomass and solar sources.

PUERTO RICO: The U.S. Federal Communications Commission approved $950 million to harden, improve and expand broadband networks in Puerto Rico and the U.S. Virgin Islands yesterday. Of that $950 million, $750 million will go towards fixed broadband and mobile data in Puerto Rico, while $184 will go to the Virgin Islands. The FCC expects that the investment will improve high-speed Internet access across the region.

MEXICO: The State Legislature of Oaxaca voted on Wednesday to decriminalize abortion in the state up to the 12th week of pregnancy. Legislator and president of the Commission of Justice Pursuit and Administration Elisa Zepeda Laguna emphasized the legislation’s importance to “hinder violence against women” in the state where abortion is the third leading cause of maternal death.

MEXICO: The government is offering a reward of $1.5 million pesos to anyone who has factual and reliable information about the 43 student teachers from Ayotzinapa Rural Teachers’ College in Iguala, Guerrero, who went missing five years ago. It would offer an additional $10 million pesos to anyone with information that could help track down Alejandro Tenescalco, a suspect in the case. “In the case of Ayotzinapa, the only truth is that until now there is no truth,” Undersecretary of Human Rights Alejandro Encinas said yesterday.

UNITED STATES: Yesterday, the Trump administration issued a travel ban against former Cuban president Raúl Castro and his four children. U.S. Secretary of State Mike Pompeo said the ban is in response to “human rights abuses” and the head of the Communist Party of Cuba’s support of Venezuelan president Nicolás Maduro.