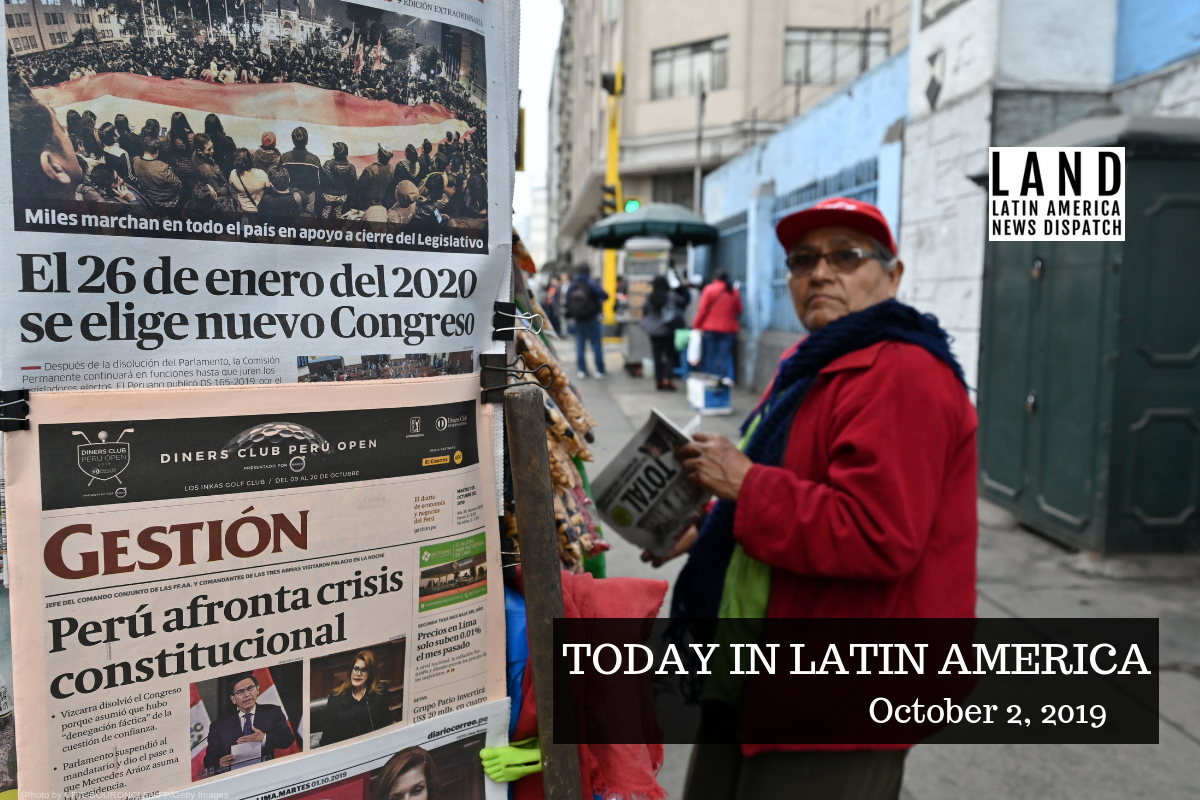 A man stands at a kiosk displaying front pages of newspapers in Lima on October 1, 2019, a day after Presiden Martin Vizcarra dissolved the unicameral Congress. (Photo by Cris Bouroncle/AFP/Getty Images)

PERU: For a short time yesterday Peru had two presidents, deepening the country’s ongoing political crisis. Congress continued to meet despite President Martín Vizcarra’s dissolution of the legislative body on Monday, dismissing Vizcarra and swearing in Mercedes Aráoz as acting president. Aráoz, Vizcarra’s vice president, resigned from both roles shortly after the Organization of American States said Peru’s constitutional court should decide whether the dissolution of congress was legal in the first place.

For now Vizcarra remains in charge, with the support of the armed forces. Peruvians largely support the move to dissolve a congress they perceive as corrupt, in part due to the Odebrecht scandal.

PARAGUAY: Justice was served for Paraguay’s trans community yesterday, for the first time in the country’s history. Blas Enrique Amarilla was given a 25-year sentence for the murder of Romina Vargas. Vargas, a transgender woman, was stabbed to death by Amarilla in 2017. Amarilla recognized his crime at the end of the trial and asked his victim’s family for forgiveness. Sixty-one trans people have been killed in Paraguay since 1989. Vargas’ case was the first to be investigated and achieve a conviction.

COLOMBIA: The Electoral Observation Mission (MOE) of Colombia identified 152 municipalities, or 14% of the country, as at risk of electoral fraud and violence, according to a report released yesterday. The number is lower than it was during the local elections in 2015, before the signing of the peace agreement with FARC rebels, when 204 municipalities were identified as at risk. On Oct. 27, Colombians will vote for governors, mayors and assembly members, despite the murder of seven candidates this election cycle.

CUBA: Cuba is facing an invasion of the giant African snail. The gastropods, which can grow up to eight inches in length, have no predators in Cuba and are believed to cause disease and kill agriculture. The government has asked that people collect them and kill them (without making skin-to-shell contact). The raccoon-like creatures are known to eat everything from produce to trash. It is unclear how the snails were introduced to the local ecosystem.

EL SALVADOR: Salvadoran authorities announced Monday that they broke up a network of criminal law enforcement agents, who are accused of committing at least 20 contracted killings. Eleven suspects were charged with illicit association and aggravated homicide, related to killings and kidnappings in 2016-2017.

MEXICO: On Saturday, International Safe Abortion Day, Mexican activists protested for safe and legal abortions. Hundreds of people flooded the streets of Mexico City, many of them wearing green bandanas to symbolize the abortion rights movement in Latin America. The Mexican state of Oaxaca approved a bill to legalize abortion last Wednesday. The topic continues to be controversial in the largely Catholic country.

MEXICO: Migrants from Africa are stranded in Mexico after U.S. President Donald Trump pressured the country to hold migrants while they wait for their asylum claims to be processed. “We have been taken hostage. We want our freedom,” José Pelé Messa, one of the travelers stuck in Tapachula, told The Guardian.