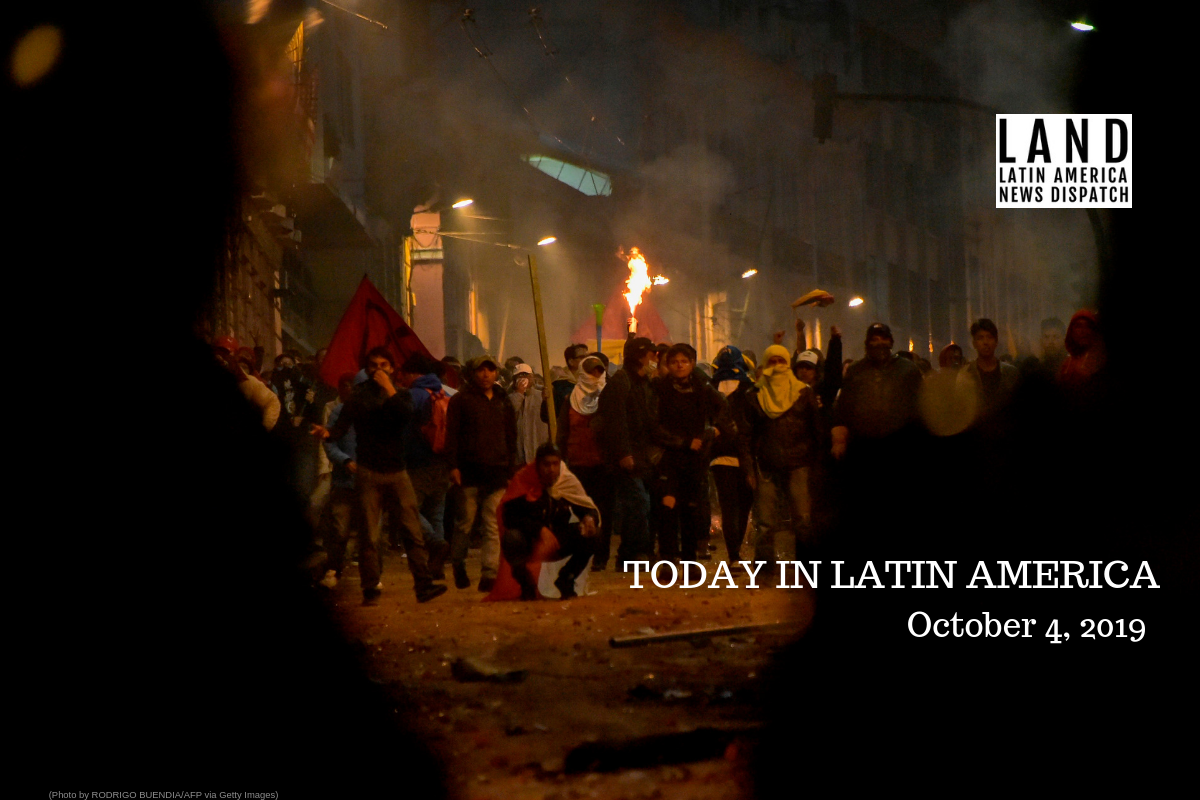 ECUADOR: President Lenín Moreno declared a state of emergency after massive protests against his decision to end government fuel subsidies. Reporting from El Pais indicates the decision increased the cost of fuel, spurred roadblocks all over the country and led to a national school suspension. Under a state of emergency, several rights, including peaceful assembly and freedom of movement, will be temporarily suspended. The federal police and armed forces will be deployed throughout the country. Moreno did not specify when the state of emergency will be lifted.

“This measure is indefinite. I hope the president makes the right decision. I know this suspension will hurt the Ecuadorian people but we demand our rights,” said National Federation of Passenger Interprovincial Transportation Cooperatives president Abel Gómez on social media.

BRAZIL: Police arrested four people who allegedly disposed of the gun that killed LGBTQ activist and Rio de Janeiro city councilor Marielle Franco in 2018, according to El País. Two of the arrested are the wife and brother-in-law of Ronnie Lessa, the former police captain of Brazil’s special forces, who has been accused of shooting the gun that killed Franco. Police also arrested martial arts instructor Josinaldo Lucas Freitas and charged him of disposing of the guns used in the murder. Although prosecutors suspect that paramilitary gangs that control Rio’s favelas might be behind the crime, it remains unclear who ordered the homicide.

COLOMBIA: The Minister of Justice, Margarita Cabello, proposed dissolving the National Penitentiary and Prison Institute after a former congresswoman escaped custody in Bogotá, according to El Espectador. Former congresswoman Aída Merlano escaped after a dentist appointment through a window and down a rope where a motorcycle was waiting for her on the street. Merlano was sentenced to 15 years in prison for electoral fraud in the 2018 elections. Reporting from Blu Radio says police have already asked Interpol to activate an orange notice against Merlano.

HAITI: As protests against the Haitian government continue, UN officials warn that conditions are becoming dire. The Associated Press cited UN spokesperson Stephane Djuarric who said that the unrest has affected schools, orphanages, civil protection units and emergency services, which are disproportionately impacting children and may worsen the hunger crisis in the country. In addition, the opposition told the Associated Press on Wednesday that they are now calling for the removal of both the parliament and President Jovenel Moïse. Opposition leader André Michel said they have created a commission to oversee the transfer of power and replace the current parliament.

PUERTO RICO: Former FEMA official Ahsha Tribble pleaded not guilty to allegations of bribery and fraud during the first day of court proceedings yesterday. Tribble was arrested in September after federal authorities uncovered she had accepted bribes from Cobra Acquisitions, an electric company that received $1.9 billion in contracts to repair damage after Hurricane Maria. Tribble faces 10 charges of fraud and conspiracy to commit bribery and was accused of violating the Travel Act. She faces up to 30 years in jail.

MEXICO: Immigration and Refugees Affairs director Atim Otti announced that Denver, Colorado, will welcome all refugees who were turned away by the United States government, according to Diario MX. The statement came after the U.S. announced a cut in the number of refugees allowed to enter the country. Otti called the executive order “harmful,” “anti-American” and “inhumane,” and assured refugees that “Denver will not be part of the list of cities that will not accept refugees.” However, despite the state’s efforts, Denver’s Human Rights and Community Partnerships department estimates that in 2020, the number of new refugees in the city will decrease by 40 percent from 2019.

UNITED STATES: United Nations top official for refugees Filippo Grandi called on Mexico to devote more resources to the country’s “badly overtaxed refugee aid agency,” according to the Associated Press. Compared with 2014, the number of people requesting asylum in Mexico has doubled due to policy changes in the United States. The UN refugee agency has supported Mexico by providing funds to hire more personnel. The Mexican government’s 2020 budget proposal included a 31 percent increase for the Mexican commission to support refugees, which is still less than the 2014 budget allocation, when it received a fraction of the asylum requests.

MEXICO: Mexican President Andrés Manuel López Obrador said that the replacement of 10 executives at Petroleos Mexicanos is an effort “to end decades-long questionable practices,” according to reporting from Bloomberg. AMLO’s statement came as no surprise after Pemex announced last Friday the replacement of the head of Pemex International and the head of crude trading, among other appointments.