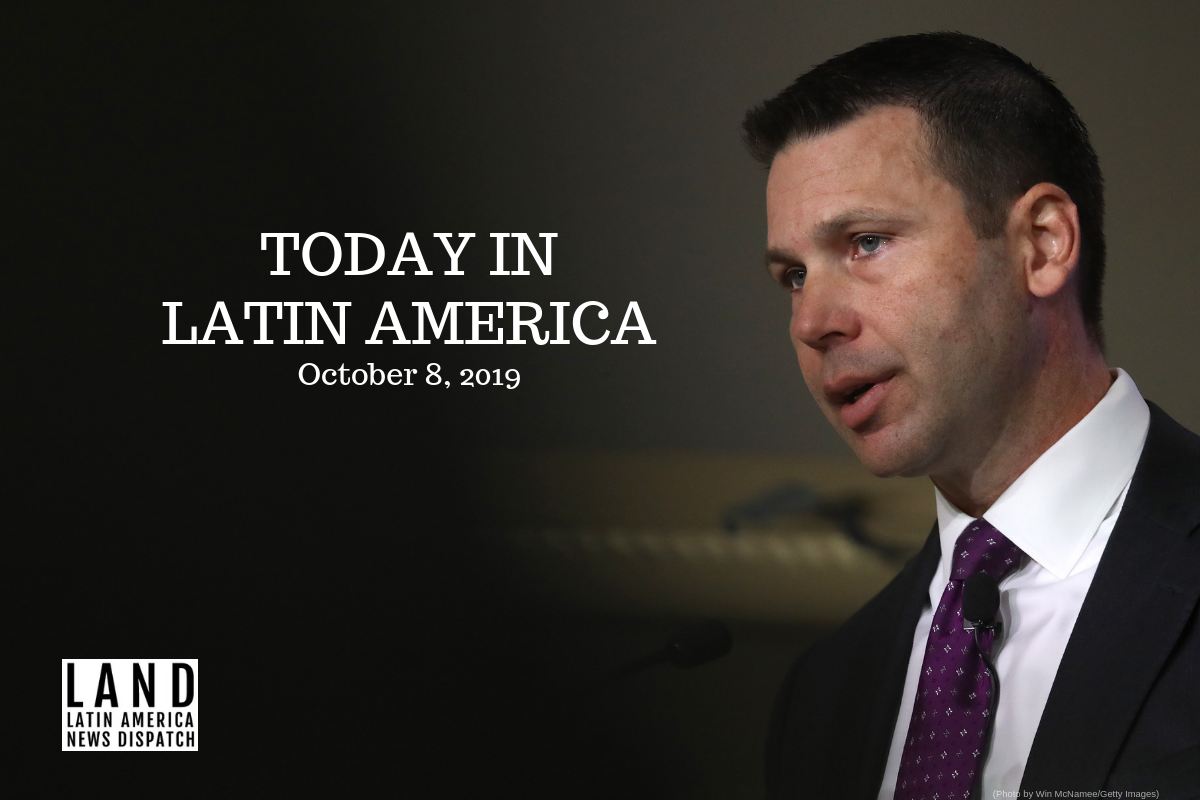 This protest comes after the Trump administration’s cuts to asylum seekers, which forced more than 50,000 migrants to wait in Mexico. Throughout the conference, the audience told protesters to sit down so that they could hear McAleenan speak, but after three attempts to try and talk, McAleenan eventually left the stage. DHS released a statement later in the day, which provided a copy of McAleenan’s prepared remarks.

BRAZIL: Brazilian environment minister Ricardo Salles is defending his government’s efforts to protect the rainforest. However, conservationists maintain that the government has turned a blind eye to farmers clearing land in the Amazon. This clearing of land has not only sped up deforestation, but is also affecting Brazil’s archeological heritage. Some of the fires are threatening ancient rock paintings in the country’s Monte Alegre Park, where paintings show that humans have occupied that region of the Amazon for at least 11,000 years.

BOLIVIA: Heavy rains finally extinguished the wildfires that started in May and destroyed more than 4 million hectares of land in eastern Bolivia. An official from the Santa Cruz province said, “It has rained all across Chiquitanía and our satellite no longer shows any active forest fires.” Firefighters are monitoring the area to ensure the blazes do not reignite.

BOLIVIA: Young Bolivians are mocking a television appearance by President Evo Morales attempting to put out fires. Supporters of the president believe this appearance shows his willingness to protect the country’s forests, but young voters view it differently: “If the president would have acted before, we wouldn’t be mourning so much loss or the death of so many animals…. I’m reconsidering my vote,” said Rolando Condori of the city of El Alto. Young voters like Condori make up a third of the country’s electorate and could influence the upcoming Oct. 20 presidential election.

DOMINICAN REPUBLIC: Former Dominican President Leonel Fernández contested his loss in the Dominican Liberation Party’s presidential primary vote yesterday. The party said Fernández only won 47.3% of the vote, which he called “a fraud.” Businessman Gonzalo Castillo Terrero won the primary with 48.7% of the vote ahead of the country’s February elections.

BAHAMAS: The director-general of the World Health Organization, Tedros Adhanom Ghebreyesus, called upon the international community to acknowledge the role of climate change and help the islands of the Bahamas recover from Hurricane Dorian. Ghebreyesus visited the islands of Abaco and Grand Bahama, where most households and island infrastructure were destroyed. Yesterday, he said, “Hurricane Dorian is another urgent reminder that we must address the drivers of climate change and invest more in resilient communities.”

NICARAGUA: Lesther Alemán, a 21-year-old journalism student who called for President Daniel Ortega to resign last year, returned to Nicaragua yesterday. Alemán had spent more than a year in exile living in the United States. After anti-government protests started in April 2018, Alemán fled Nicaragua through the southern border to Costa Rica before traveling to the United States. However, Alemán remains critical of the Nicaraguan government, and has said that “the repression in the country continues.”

UNITED STATES: Former Honduran mayor and drug trafficker Amilcar Alexander Ardón testified in a Manhattan court yesterday that Honduran President Juan Orlando Hernández’s brother accepted $1 million from “El Chapo” during Hernández’s presidential campaign in 2013. Ardón claims that bundles of $50,000 and $100,000 for Tony Hernández were placed on a table during meetings in the municipality of El Paraíso. President Hernández denied the claims and has not been charged with any wrongdoing. Tony Hernández’s defense argued that there is a lack of evidence for the accusations.

MEXICO: Thousands of medallion taxi drivers parked their cars to block major roads in protest of apps like Uber, Didi and Cabify in Mexico City yesterday. The protest was in response to licensing, taxes, inspection and tests that taxi drivers must follow that ride-hailing drivers do not. Similar protests were scheduled to take place across 28 of Mexico’s states. President of the National Movement of Taxi Drivers, Ignacio Rodríguez, released a statement saying that the growth in ride-hailing services have started to pose a problem for the taxi industry.

Where Are The Hispanic Executives?

Where Are The Hispanic Executives?