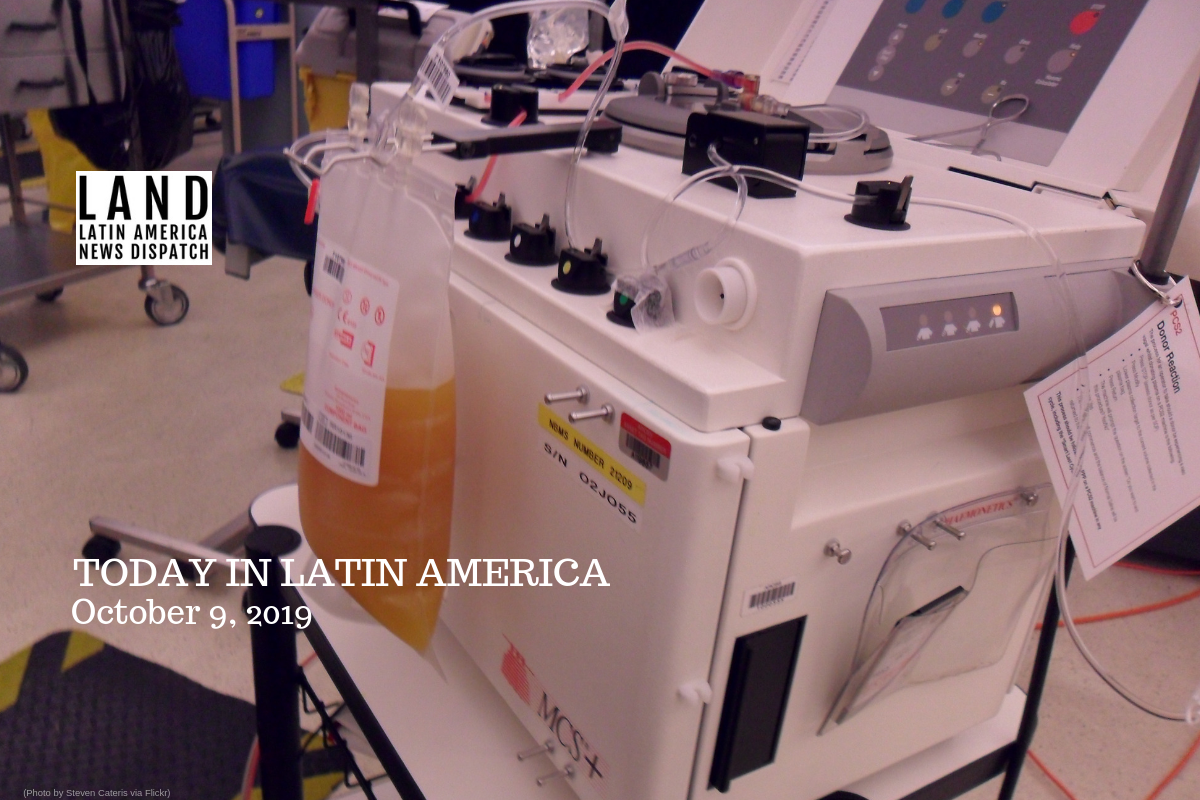 U.S.-MEXICO BORDER: ProPublica published a shocking report yesterday that alleged U.S. drug companies “lured” Mexican plasma donors through Facebook ads and flyers promising high payments. Thousands of Mexicans cross the border each week on temporary visas designed to allow people to shop or engage in transactions that don’t equate to “gainful employment,” according to ProPublica. The publication’s reporting suggested that employees sometimes encourage the donors, who earn about $400 per month, to lie to U.S. Customs and Border Patrol about the nature of their visits.

While other countries forbid plasma selling and limit the amount of donations, the United States allows people to donate 104 times per year (or once every 3.5 days). Donating plasma frequently is associated with a more vulnerable immune system. One woman told ProPublica she has experienced migraines, fainting and numbness in her limbs as additional side effects.

COLOMBIA: Former president Álvaro Uribe testified in Colombia’s Supreme Court yesterday for allegedly manipulating witness testimonies. Uribe spent seven hours inside the courtroom answering more than 40 questions by the judges. Uribe is the first president to be brought to testify by the Supreme Court. He is accused of ordering his attorney to offer bribes to jailed paramilitary leaders in exchange for testimonies exonerating him from links to right-wing death squads.

ECUADOR: President Lenín Moreno fled Quito to Guayaquil after massive protests erupted in the capital city yesterday. Ecuador has been rocked by protests since Moreno ended oil subsidies last week. The subsidies were part of a $4.2 billion finance plan with the International Monetary Fund that expected to help Ecuador’s poor. The protests have remained violent over the past week. Protesters clashed with police and overtook state-owned oil facilities. Moreno declared a state of emergency and accused former president Rafael Correa and Venezuelan President Nicolás Maduro of destabilizing his country.

BOLIVIA: Bolivians took to the streets of La Paz yesterday to protest President Evo Morales’s run for a fourth consecutive term, just 11 days before the election. Doctors and Indigenous groups were among the protesters. Indigenous communities demanded the government declare a state of emergency in regions affected by massive forest fires. Doctors in La Paz have been on strike for 50 days, providing emergency services. The country will vote for a new president and congress on Oct. 20.

VENEZUELA: Venezuelan opposition leader Juan Guaidó signed a $98 million deal in Washington, D.C. with USAID yesterday. The aid will help his supporters fight censorship and protect human rights, according to Guaidó. Guaidó is recognized by the United States and 50 other countries as the legitimate leader of Venezuela, instead of President Nicolás Maduro.

CUBA: Nineteen media outlets released the “Declaration of Independent Cuban Media” Monday demanding a change in the government’s treatment of the press. The statement alleged that since January 2018, there have been more than 180 documented attacks on journalists. The group alleged that the violence stemmed from a country-wide crackdown of independent journalism. Some of the alleged attacks include arbitrary detentions, travel restrictions and psychological intimidation.

GUATEMALA: Guatemala’s Constitutional Court ordered the government to halt a controversial inquiry Monday into the work of a UN-backed anti-corruption commission. The International Commission Against Impunity in Guatemala (CICIG) teamed up with local prosecutors to litigate corruption cases. It operated popularly for 12 years, even after bringing down a sitting president in 2015. But the government shut it down in early September after it investigated President Jimmy Morales. The investigation into its activities was announced Sept. 23.

U.S.-MEXICO BORDER: U.S. law enforcement have arrested 1 million migrants along the U.S.-Mexico border over the past year, according to Mark Morgan, acting commissioner of U.S. Customs and Border Protection. In September, nearly 52,000 migrants were detained or deterred, marking a 60% decline from May’s 13-year high. Morgan praised the Mexican government for enforcing the Migration Protection Protocols.

U.S.-MEXICO: U.S. presidential candidate Julián Castro met with asylum seekers in Mexico who were stuck south of the border after the enactment of the “Remain in Mexico” policy. He visited people with disabilities and members of the LGBTQ migrant community, whom Castro says are “particularly hurt” by the policy, according to NBC News Digital. The presidential candidate said that if he is elected, he will end the “Remain in Mexico” policy immediately. In addition to visiting migrants in Matamoros, Castro crossed an international bridge that connects the United States and Mexico to aid migrants in making asylum petitions.