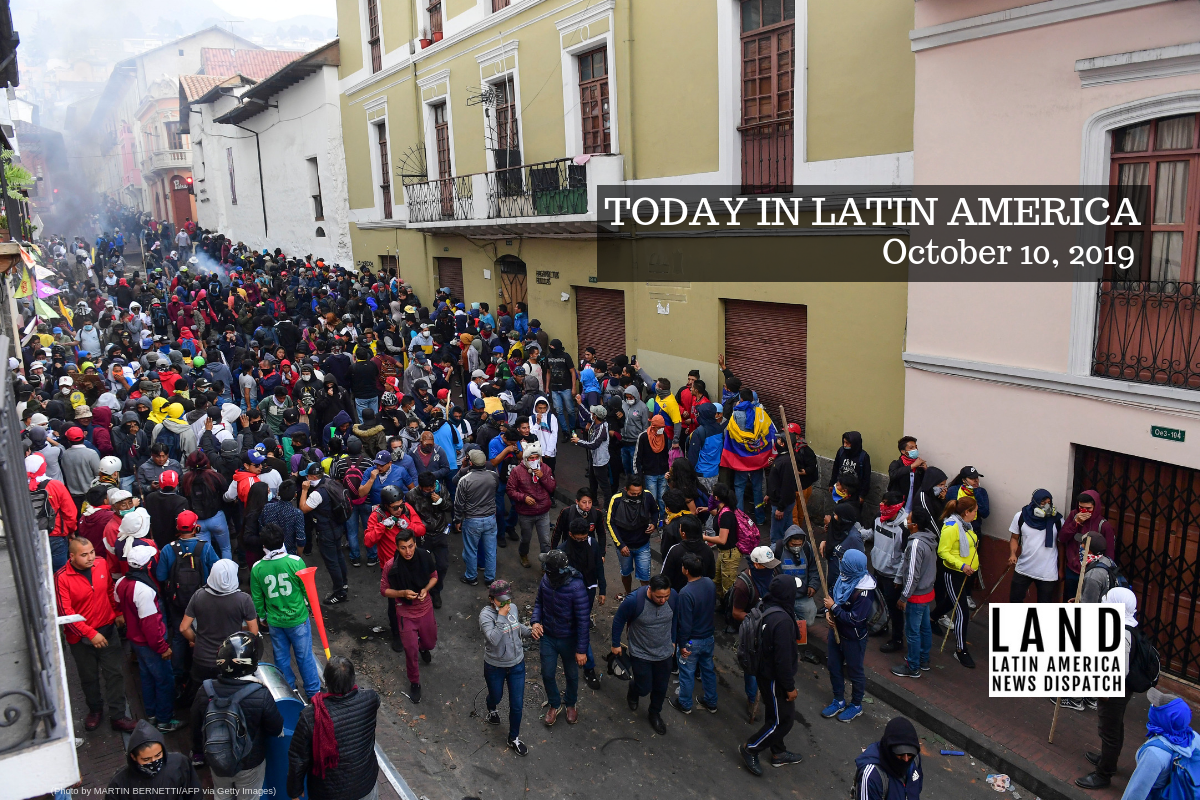 Demonstrators gather during clashes with riot police in Quito on October 9, 2019 on the second day of violent protests over a fuel price hike ordered by the government to secure an IMF loan. (Photo by MARTIN BERNETTI/AFP via Getty Images)

ECUADOR: Protests in Ecuador continue for the sixth day as President Lenín Moreno refuses to step down or overturn austerity measures. Indigenous leaders and protesters converged on Quito, the country’s capital, to protest austerity measures that Moreno has undertaken in order to receive a $4.2 billion loan from the International Monetary Fund (IMF). Moreno, who previously vowed he would never end fuel subsidies in the country, relocated his government to Guayaquil yesterday to avoid protests being held in Quito, an act that further angered protesters. Moreno has said that he is “open to dialogue.” Violence among protesters has increased, and Quito is under curfew, where 570 people have been detained as of Tuesday.

BRAZIL: The oil spill polluting beaches in northeastern Brazil has likely come from Venezuela, according to a report from Petroleo Brasileiro SA, the state-run oil company. Brazilian authorities have spent over a month investigating the source of more than 100 tons of crude oil that have spilled over nine Brazilian states, contaminating over 130 beaches. Environment Minister Ricardo Salles told the Brazilian congress yesterday that the spill is “enormously difficult to contain.” Petróleos de Venezuela, the state-run oil company of Venezuela, has not yet responded.

BRAZIL: Marielle Franco, the LGBTQ activist and former Rio de Janeiro councilwoman who was shot last year, has been nominated for the Sakharov Prize for Freedom of Thought, a top human rights prize awarded by the European Union. Before Franco and her driver were killed in 2018, she had been a vocal critic of police brutality and extrajudicial killings in Brazil. Franco was also an advocate for women’s and LGBTQ rights. Past awardees of the Sakharov Prize include the Argentine Mothers of the Plaza de Mayo, Nelson Mandela and Malala Yousafzai. The 2019 award winner will be announced on October 24.

ECUADOR: Anti-austerity protests in Ecuador have impacted the oil output of the country, as operations have been suspended by the state-run oil company Petroamazonas. The disruption has cost the country 232,000 barrels-per-day of production, according to Carlos Perez, the country’s energy minister. In a statement on Tuesday, the Ministry of Energy explained that the suspension is due to three oil fields being “taken by individuals not affiliated with the operations.” Protests have also complicated operations at the private oil company Petrobell.

EL SALVADOR: The Salvadoran government began a mass trial of 400 alleged gang members on Tuesday. Included among the 400 on trial are 17 supposed leaders of the MS-13 crime network. Court arguments are likely to last until November because of the trial’s immense size. Close to 100 defense lawyers are assigned to the case and only 16 suspects attended court on Tuesday while others joined the hearing by prison video conferences.

PANAMA: The Panama Canal concluded the 2019 fiscal year by reporting record high tonnage shipped through the canal. The canal received shipments of 469 million tons this fiscal year, a 6.2% increase from last year. Alternative energy sources were responsible for a large increase in the shipments: boats powered by liquid natural gas and liquid petroleum gas sailed the canal in higher rates than previous years, with natural gas-powered ships seeing a 37.6% increase.

HAITI: Leaders of the Haitian opposition announced that they will continue to protest on the streets until President Jovenel Moïse resigns. Some leaders said a demonstration within the president’s current residence is planned for tomorrow. For the past month, Haitians have taken to the streets to protest a number of economic and political problems, including fuel shortages and misappropriation of government aid. Florida Republican Sen. Marco Rubio said the United States will not be playing a role during the political unrest and that “who they choose as leaders are up to the processes that they run internally.” So far, at least 18 protesters have died while participating in anti-government riots.

TRINIDAD AND TOBAGO: Police discovered dozens of prisoners at a rehabilitation center in the town of Arouca yesterday. The officers reported that the 65 men and 4 women had been kept in chains and cages in conditions resembling “modern-day slavery” at the Transformed Life Ministry Rehabilitation Centre. Police Commissioner Gary Griffith called the operation “human trafficking,” noting that some prisoners had been kept at the facility for years. Police arrested six individuals at the center.

MEXICO: On Wednesday, thousands of people gathered in Mexico City to pay their respects to singer José José. The iconic Latin American artist was memorialized in a tribute at the Palace of Fine Arts and a Mass at one of Mexico’s most important Roman Catholic shrines. Close relatives, famous Mexican artists, and Mexico City Mayor Claudia Sheinbaum —as well as other Mexican officials— were present. The Department of Culture estimates that around 15,000 came to say goodbye to one of the most famous Mexican singers of all time.

MEXICO: Eleven people were arrested in Las Margaritas, a municipality in the state of Chiapas, after allegedly chaining and dragging their mayor through town. Dozens of police officers intervened to free Mayor Jorge Luis Escandón Hernández after he was kidnapped, leaving his mayoral office and tied to a pickup truck. Footage of the incident shows Hernández tied with rope around his hands to the back of a truck being dragged through street roads. Hernández reportedly suffered no significant injuries and plans on pressing charges for the abduction and attempted murder. This is the second time locals have attacked Hernández due to anger over unfulfilled campaign promises.