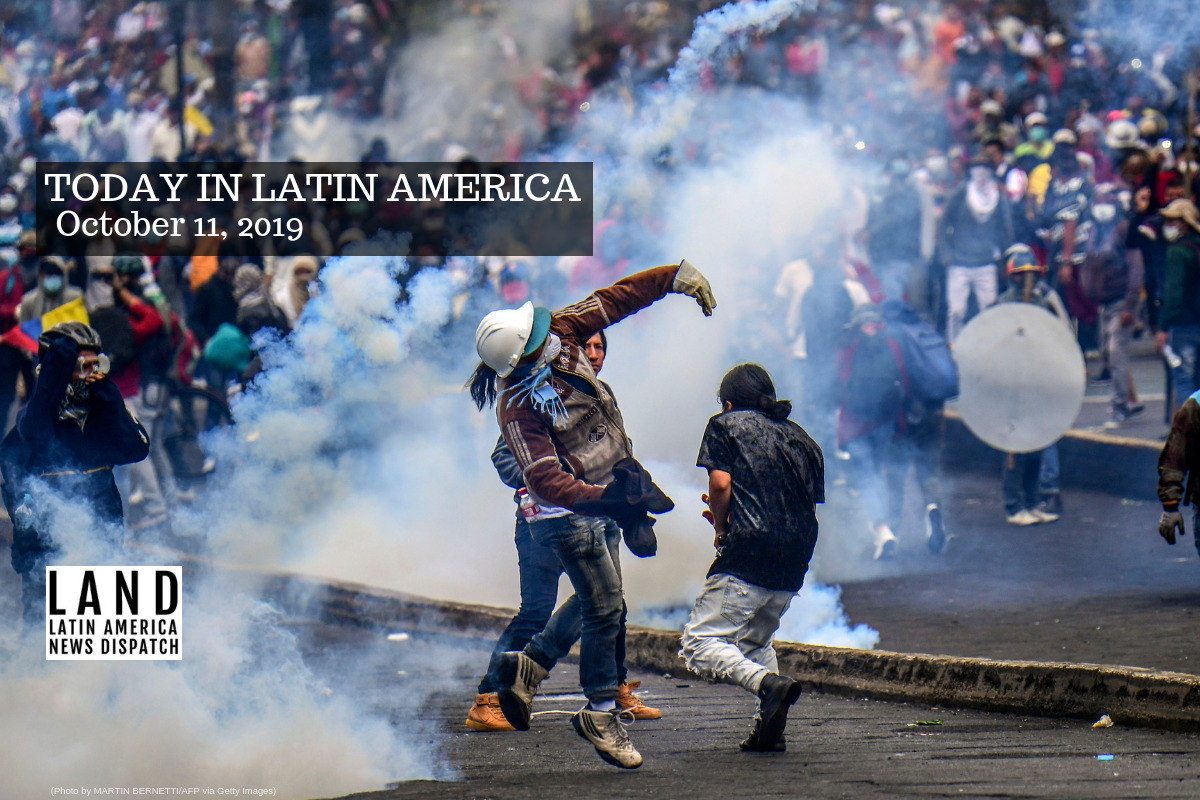 Demonstrators clash with riot police during a protest over a fuel price hike ordered by the government to secure an IMF loan in Quito on October 11, 2019. (Photo by Martin Bernetti/AFP/Getty Images)

ECUADOR: The crisis in Ecuador continues to escalate as the public defender’s office today said that five people —including one Indigenous woman— have died since the protests began on October 2. The Confederation of Indigenous Nationalities of Ecuador (CONAIE) has taken four policemen as hostages in Quito’s Cultural Center, according to EFE. Jaime Vargas, the leader of CONAIE, called on the Indigenous communities to “radicalize the actions” and confirmed that the group will not speak with a “murderous government.” The Indigenous communities arrived in Quito earlier this week and have been protesting all over Ecuador due to Moreno’s decision to end government fuel subsidies.

BRAZIL: Environment minister Ricardo Salles accused Venezuela of spilling the oil that has reached 132 beaches in nine northeastern states. Salles addressed the oil spill that has been expanding for a month in front of Congress last Thursday. While the exact amount of oil that’s been contaminating the beaches is still unknown, Petrobras’ chief executive Roberto Castello estimated that the number is near 500 barrels, and therefore ruled out a tanker cleaning operation as the possible cause.

COLOMBIA: The heads of the political party of the former guerrilla group FARC officially requested that the party’s ethics committee expel Iván Márquez and Jesús Santrich, the two leaders that took back their arms in August, jeopardizing the peace agreement that the former guerrilla group signed in 2016 with the Colombian government. In a news release, the political party stated that the FARC is a place “to fight for democratic transformations … in which armed expressions have no place.” Even if the majority of former guerilla members are still transitioning into civilian life, according to official data, at least 3,200 men and women have rejoined the new dissident groups.

REGION: The United Nations Food and Agriculture Organization launched an emergency project last week to try to save banana crops across Latin America and the Caribbean that are threatened by a fungus known as Fusarium wilt or TR4, according to a news release from the UN. It is the “world’s greatest threat to bananas,” according to the World Banana Forum, and it could potentially lead to critical food and income shortages if it is not contained.

JAMAICA: Former Education Minister Ruel Reid was arrested on Wednesday in connection to corruption and fraud. The police investigation focused on a multi-million dollar scheme involving the Ministry of Education, Caribbean Maritime University (CMU) and other government bodies overseen by Reid, which have been suspected of misappropriating government funds. Reid had previously resigned from his position as minister and gave up his seat in the senate in March, amid increasing accusations. Arrest warrants were also served to the residence of the university’s current president, Fritz Pinnock.

NICARAGUA: New estimates by the World Bank released yesterday show that Nicaragua’s GDP is expected to fall over the next three years, despite President Daniel Ortega’s promise to grow the country’s economy. The World Bank forecasts a 5 percent fall by the end of this year, which would represent the greatest decline among Latin American countries. Ovidio Reyes, president of the Central Bank of Nicaragua, had previously pledged a 1 percent increase this year. “What is coming is a kind of recovery, and that recovery is going to be faster or slower depending on our funding,” Reyes said. While the World Bank will not forecast economic growth for Nicaragua until 2021, Latin America as a region is expected to increase its wealth by 1.8 percent this year.

U.S.-MEXICO BORDER: Hundreds of migrants from Central America camped out on a Matamoros-Brownsville bridge yesterday, leading to its temporary closure. Yesterday’s camp-out on the Mexican side of Matamoros bridge appeared to be more of a protest than an attempt to cross as migrants told the media they were tired of waiting to make their initial claims for asylum in the United States. U.S. Customs and Border Protection said in a statement that, as of noon, the Gateway International Bridge remained closed and that traffic was interrupted for a few hours before dawn, but was later reopened.

MEXICO: Business and church leaders say they are being hit by a wave of extortion demands by criminal gangs in Mexico’s north-central state of Guanajuato, according to the Associated Press. The state, once wealthy and considered a success story for attracting high-tech manufacturing investment, is now being targeted by criminals after the federal government’s crackdown on pipeline fuel theft earlier this year. Guanajuato’s homicide rate has also spiked with 2,275 murders in the state in the first eight months of 2019, more than double than in the same period of 2017.

UNITED STATES: Alleged El Paso mass shooter Patrick W. Crusius pled not guilty to capital murder yesterday. Crusius, 21, is accused of murdering 22 people at an El Paso Walmart on August 3, the deadliest attack on Hispanics in recent U.S. history. The state’s indictment does not accuse Crusius of a hate crime, but federal prosecutors have said they are considering such charges.