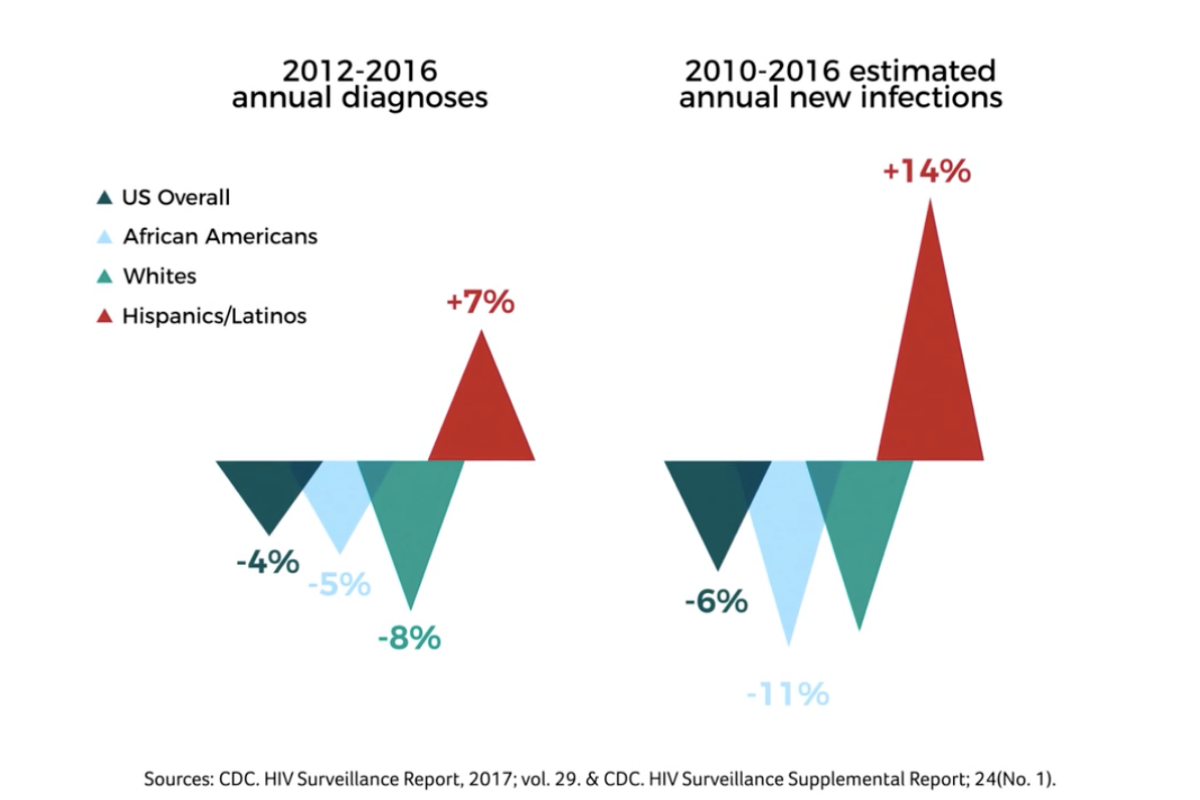 While overall HIV infection rates have reportedly decreased in recent years, a new report and infographic by New York University’s Center for Latino Adolescent and Family Health and the Latino Commission on AIDS shows that rates have increased for Latinos in the U.S. Released on National Latinx AIDS Awareness Day, experts behind the research project called the issue an “invisible crisis.”

“Persistent HIV disparities among U.S. Hispanics/Latinos represent a significant challenge to national goals for ending the HIV epidemic by 2030,” the report states.

According to the report, Latino MSM (men who have sex with men) had the largest increase in estimated annual infections of all racial/ethnic and transmission groups, and one in four transgender Latinas are estimated to live with HIV.

National Latinx AIDS Awareness Day was created to fight stigma and to raise the alarm on the impact the disease has on the Hispanic community. Several organizations, advocates and political representatives have shared tweets with information on HIV/AIDS.

Hispanics/Latinos represent nearly 18% of the US population, but accounted for 26% of the 38,739 new HIV diagnoses in the US and 6 dependent areas in 2017. Today is National Latinx AIDS Awareness Day. Learn more: https://t.co/2IYWuurXv7#NLAAD pic.twitter.com/X1jJpJqMZt

With nearly 26,000 new HIV infections every year, our efforts to #StopHIVstigma and support all individuals and voices living with the disease is of the utmost importance. #NLAAD

Today is National Latinx HIV/AIDS Awareness Day. Talk about it. Reduce stigma. Get tested. Know your status, and help educate your friends, family, and communities about the resources available to them. We're fighting this together. #NLAAD2019 https://t.co/g4eV788V09

In recent years, more than 1 in 4 new HIV diagnoses in the US were in Latinx communities. On this National Latinx AIDS Awareness Day, let’s work together to #StopHIVStigma, help increase access to HIV testing & treatment, and share information about disease prevention. #NLAAD https://t.co/tfzpTKBRBy

Along with the report, an infographic with more information was released. Watch it here: