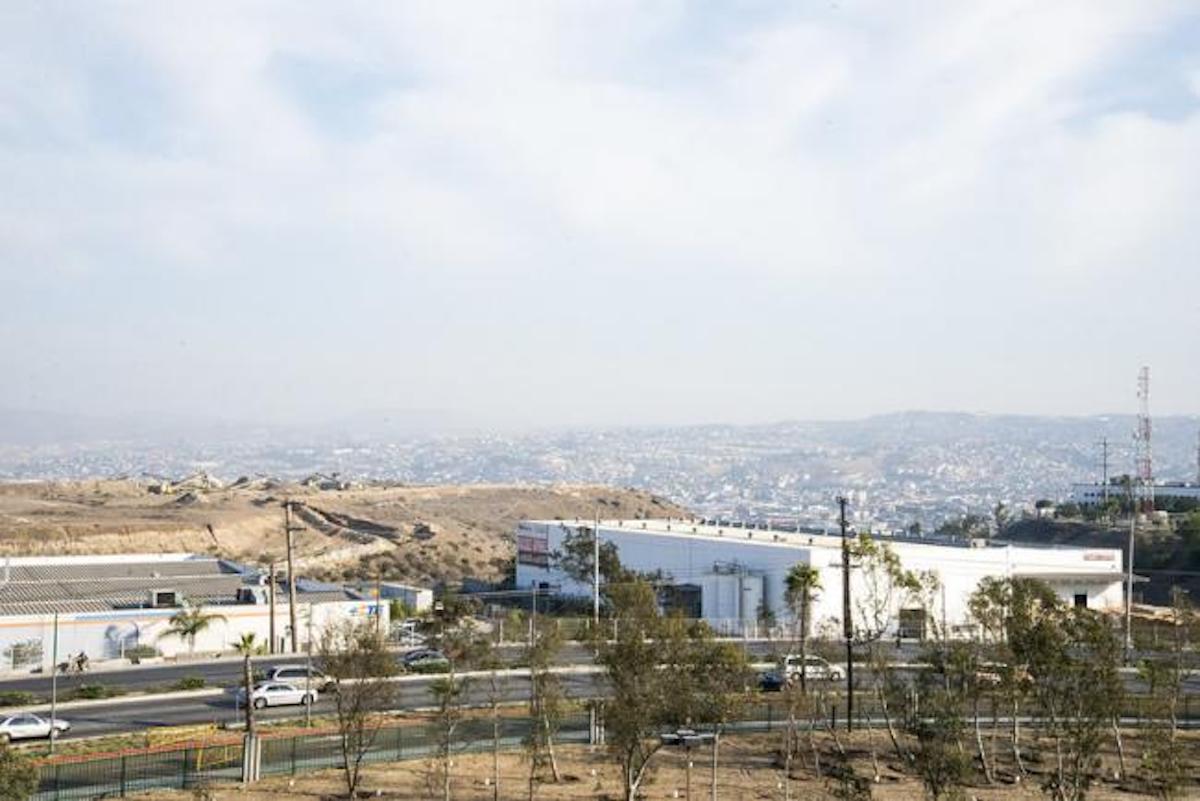 Maquiladora as seen in Tijuana, Mexico. (Photo by Anthony Albright/Flickr)

By Nina Ebner and Mateo Crossa

On August 5, 2019, the Mexican federal government and INDEX, the maquiladora business association, inaugurated the “Leona Vicario” migrant center in Ciudad Juárez. Housed in a former maquiladora —often foreign-run, export-led manufacturing plants— the center is the first of several that will be opened along the northern Mexican border to serve individuals and families that the United States has sent back to Mexico to pursue their asylum claims under the Trump administration’s “Remain in Mexico” program. Policies like this one have turned Mexican border cities into a “waiting room” for thousands of migrants arriving to cross into the United States. According to government press releases, the new center will more efficiently connect these migrants, mainly from Central American countries like El Salvador, Honduras, and Guatemala, with some of the almost 50,000 vacancies in the maquiladora manufacturing sector along Mexico’s northern border.

Federal programs like this one, designed to integrate a migrant workforce into the industrial labor markets of northern Mexican border cities, must be understood alongside the current anti-migrant policies supported by both the Trump and López Obrador administrations, as well as the new trade agenda under the terms of the renegotiated NAFTA —the United States-Mexico-Canada Agreement (USMCA)— which is poised to restructure economic relationships in North American. In lieu of efforts to pursue significant wage increases and better working conditions, we are instead witnessing a joint effort between the U.S. and Mexican governments to deepen labor precarity along the border.

Currently, anti-migrant policies and the militarization of the U.S.-Mexico border are integral to maintaining a low-wage labor force in northern Mexican border cities. Yet the low wages of maquiladora assembly-line workers have long been key to the competitiveness of Ciudad Juárez in a restructuring global economy. So if we turn to two moments in the U.S.-Mexico border’s history of economic development, we can clearly visualize the long-term relationship between the border’s economic competitiveness —rooted in the employment of vulnerable migrants in industrial jobs— and the concurrent criminalization of these very same migrants.

The industrial development of northern Mexico in the 1960s turned cities such as Ciudad Juárez and Tijuana into centers for the labor-intensive, manual assembly of goods for export. In its early days, the maquiladora was framed as a way to employ the millions of out-of-work former braceros who were returned to Mexico after the agricultural guest worker Bracero Program was canceled in 1964. In reality, low-wage industrial jobs were filled by thousands of young women, migrating en masse from rural communities in northern Mexican border states. Yet, even as the early industrial development of Mexico’s northern border depended on the labor of rural Mexican migrants, it was also accompanied by U.S. policies that resulted in the simultaneous restriction, increased control over, and criminalization of migratory flows from Mexico and Latin America to the United States. For example, Operation Interception in 1969, which increased law enforcement staffing along the U.S.-Mexico border and therefore made it harder to cross, was an early example of border militarization. These policies and initiatives did not stop Mexican migrants from crossing into the U.S. in search of work, but rather served to increase their vulnerability, and to lower the value of their labor on both sides of the border. Starting in the 1960s, these kinds of policies —in support of export production and border militarization— would tie Mexico’s economic “competitiveness” to a low-wage export strategy: one which was deeply entangled with, and even dependent on, the United States.

The signing of NAFTA in 1994 expanded the viability of the maquiladora industry. By 2000, the sector would generate 48 percent of Mexico’s exports. More importantly, it served to deepen uneven economic and political relationships between Mexico and the United States. According to Dancing on Quicksand: A Retrospective on NAFTA on the Eve of its Replacement by James Cypher and Mateo Crossa, NAFTA was an investment project for the United States rather than a “free trade” deal, increasing U.S. foreign direct investment in Mexico, growing the number of U.S.-owned plants, and facilitating the export of goods, mainly to U.S. markets. While these reforms accelerated the flows of goods and capital, they were accompanied by policies and practices that would reduce the mobility of ordinary people. Then-Mexican president Carlos Salinas famously opined that the goal of implementing NAFTA was to “export goods and not people.”

Like in its early days, the competitiveness of the maquiladora continued to be rooted in low-cost migrant labor. NAFTA, in concert with economic reforms pursued by the neoliberal regime of President Salinas, killed agricultural production and increased economic hardship. As a result, workers left rural communities of southern states such as Oaxaca, Chiapas, Puebla, and Veracruz to find work in the maquiladoras of northern cities, or to try and make it to the U.S. The U.S. government responded to the increased migratory pressures wrought by trade deals and economic restructuring in Mexico by developing restrictive immigration reforms —the Illegal Immigration Reform and Immigrant Responsibility Act— which further criminalized migrants. It also militarized the border —beginning border wall construction between Tijuana and San Diego— and implemented initiatives like Operation Gatekeeper, which increased technological surveillance and the number of border patrol agents deployed on the ground, in order to deter migrants from crossing.

Like in earlier decades, these policies had little effect in reducing migration to the United States, but instead only increased the vulnerability of migrants.

Deepening the Vulnerability of Migrant Labor

Since its inception, the Trump administration has implemented new policies and practices that further criminalize migrants —both those arriving at the U.S.-Mexico border and those living in the United States— and that continue to militarize border communities. Simultaneously, it has spearheaded an effort to revitalize NAFTA in the form of the USCMA, a trade agreement that mainly seems designed to protect the United States from global competition. The deal’s impact on Mexico’s industrial development is unclear, but the maquiladora industry will likely continue to grow as it becomes increasingly valuable to companies looking to reduce production costs, especially as costs go up elsewhere in the supply chain. Despite narratives of industrial upgrading, after almost 60 years of economic development along the border, the economic competitiveness of the maquiladora continues to be tied to low-wage labor. For example, even with the recent doubling of the minimum wage, wages for assembly-line workers in Ciudad Juárez are some of the lowest in Mexico.

The López Obrador administration is cooperating in support of the Trump administration’s hardline approach to both immigration and trade, despite campaigning on a pro-migrant platform. “What we want,” according to López Obrador in June 2019, “is to organize migratory flows and provide alternative employment options, while at the same time maintaining good relations with the U.S. government and avoiding a trade war.”

Critics decry that the Mexican government’s policies are not designed to protect migrants, and instead are continuing earlier approaches of treating migration as a national security problem that needs to be solved with border militarization. In the time since he took office, López Obrador’s administration has increased the amount of troops on the border and deployed a new national guard tasked with curbing migration. Despite these efforts, acting Customs and Border Protection commissioner Mark Morgan recently said that although “meaningful and unprecedented steps” to stop migrants passing through Mexico have been taken, the Mexican government still “needs to do more.”

In the months since the United States instituted the “Remain in Mexico” policy, the government has sent more than 15,000 people to Ciudad Juárez. Migrants face violence and lack access to both shelter and legal council. According to a migrant from Honduras, “I would rather be detained, and put into prison in the United States, than stay in Mexico.” Recently, advocates in El Paso told us that the timeline for pursuing an asylum claim under “Remain in Mexico,” is deeply uncertain, but could take up to two years. Against this backdrop, the increasing impossibility of crossing the U.S.-Mexico border northwards means that asylum seekers from Central America may become the next vulnerable, semi-permanent migrant population that the maquiladora industry will use to fill vacancies as demand increases. López Obrador has also floated projects that would integrate migrants into planned mega-projects in southern Mexico.

Even with the new federal initiative to set up migrant shelters along the border, and pre-existing coordination with the maquiladora industry, connecting migrants with job opportunities has been slow. In response, the national president of INDEX, Luis Aguirre Lang, explained that in the coming months, efforts to promote vacancies for Central American migrants who have a work permit in Mexico will intensify, citing the benefits of putting migrants to work in maquiladoras. “We are working with the Ministry of Labor to create a precise strategy for all Central American migrants who are stranded in border municipalities. Remember, our industry has been strengthened by this type of phenomena.”

The coordination between the government and the private sector may also be part of an effort to increase control over maquiladora workers, a control which has been challenged by strong labor mobilizations in Ciudad Juárez and Matamoros in recent years. In any case, it is clear that the Leona Vicario Center, and others like it that will be opened along the border, is a small part of an ongoing effort to put migrants to work in northern Mexican border cities.

More than half a century has passed since the birth of the maquiladora put Ciudad Juárez on the map as a center of manufacturing in the global economy. In 2019, we are witnessing the inaugural stage of a new cycle in the long-standing relationship between this model of economic development—one predicated on the competitiveness of low-cost migrant labor and anti-migrant policies. Like NAFTA, the USMCA makes little reference to immigration reform or worker mobility. While not surprising, it offers little hope for future positive revisions. In concert with recent trade and labor policies, the current slew of anti-migrant initiatives —and efforts to further militarize border communities— only deepen the precarity and immobility of both migrants and border residents.