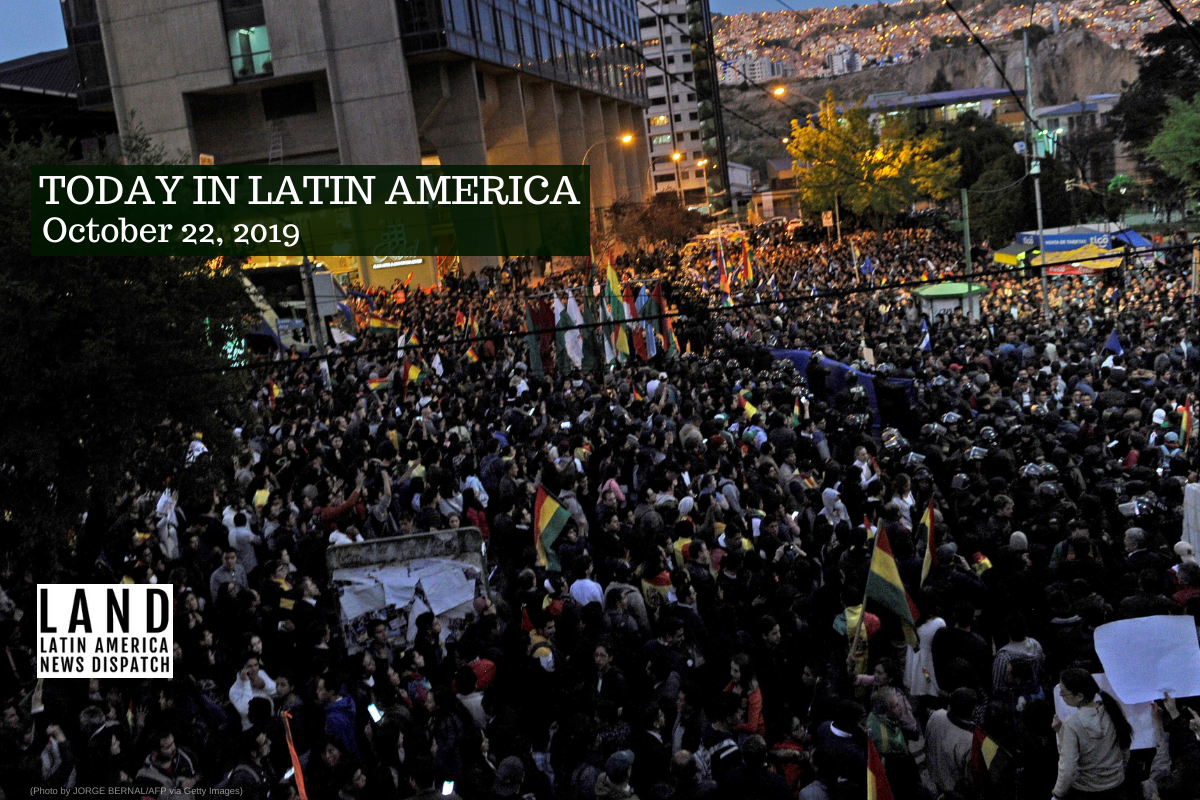 Supporters of Bolivia's opposition presidential candidate and of president and candidate Evo Morales, are separated by security forces in La Paz, on October 21, 2019. (Photo by Jorge Bernal/AFP via Getty Images)

BOLIVIA: President Evo Morales came out ahead of yesterday’s elections, yet the latest results show that he is a few points short of avoiding a run-off with second-place candidate Carlos Mesa. Bolivians began protesting yesterday after the electoral authority stopped announcing updated results on Sunday. Morales claimed victory at winning an unprecedented fourth presidential term Sunday evening, but the official tally is not expected until next week.

The most recent results showed Morales polling at 45.3 percent to Mesa’s 38.2 percent. However, Bolivian presidential candidates must score 10 points ahead of their competitors to avoid going to a run-off election. The Organization of American States’ Electoral Tribunal has expressed concern that the vote has not been updated and is closely monitoring the election. Before the election, Mesa warned of “manipulation of the vote to impede a second round” at a run-off.

CHILE: Yesterday, hundreds of protesters resisted an emergency decree and took to the streets of Santiago to confront police. Since protests began last week, 11 people have died. Thousands of Chileans have participated in protests and police have responded with tear gas and water hoses. Many local supermarkets closed over the weekend due to the chaos, and Chileans gathered in long lines when they reopened yesterday. President Sebastián Piñera declared Sunday evening that the country is “at war.”

ARGENTINA: President Mauricio Macri took advantage of Argentina’s second presidential debate to attack his rival Alberto Fernández. Macri accused Fernández of tolerating the corruption of Kirchnerism. In return, Fernández accused Marci of lying and worsening economic conditions in Argentina. The debate took place at the University of Buenos Aires’ Law School on Sunday. Argentina’s election is set for this coming Sunday, and Fernández is predicted to win.

DOMINICAN REPUBLIC: The FBI has ruled out tainted alcohol as the cause of recent tourists’ deaths in the Dominican Republic. The bureau’s toxicology reports confirmed the findings of local authorities, linking the deaths to natural causes. At least 10 American tourists have died in the past month on vacation, and there was speculation that foul play was involved. The panic led some airlines to waive change fees for customers with flights to the country, causing concern for the country’s large tourism industry.

HAITI: Homeless Haitian migrants in the Bahamas could now face deportation. The Bahamian government has strict immigration policies—with expensive work permits and passports necessary to gain citizenship. Deportations are common, but they are being challenged in the wake of Hurricane Dorian. Many migrants refused to be evacuated to Nassau from Abaco, where many Haitian shanty towns once stood, for fear of not being allowed to return. While deportations were put on hold in the immediate wake of the hurricane, Prime Minister Hubert Minnis announced they would resume.

EL SALVADOR: United States Marines veteran José Segovia Benitez faces deportation to El Salvador, a country he has not visited since he was 3 years old. Segovia served with the Marines from 1999 to 2004 and returned with symptoms of post-traumatic stress disorder and a brain injury. ICE detained Segovia after he served time for multiple crimes involving drugs and domestic violence, and an immigration judge ordered him removed in October 2018. Segovia was put on a flight to El Salvador last week but removed from the plane before it took off. It is still unclear why he was allowed off the plane, but the Department of Homeland Security has confirmed that Segovia is under “ICE custody pending removal.”

UNITED STATES: The Trump administration amended immigration policies to allow officials to collect DNA samples from detained migrants and asylum-seekers. Yesterday, the U.S. Department of Justice released regulations that would mandate DNA collection from nearly every detained migrant. The same rules will not be applied to legal permanent residents, those entering the United States legally or children under 14 years old. Civil rights groups have expressed concerns over the potential misuse of this sensitive data.

MEXICO: President Andrés Manuel López Obrador announced yesterday that his government is still planning to arrest El Chapo’s son Ovidio Guzmán, once the arrest can be done safely. AMLO’s announcement comes days after an attack in the northwestern city of Culiacán, where the Sinaloa Cartel performed a rescue mission for Guzmán that left 14 people dead. After detaining Guzmán last Thursday, officials were outmatched by the cartel’s violence and released him. In a moment of solidarity, U.S. President Donald Trump agreed to work on a plan to freeze the flow of arms into Mexico.