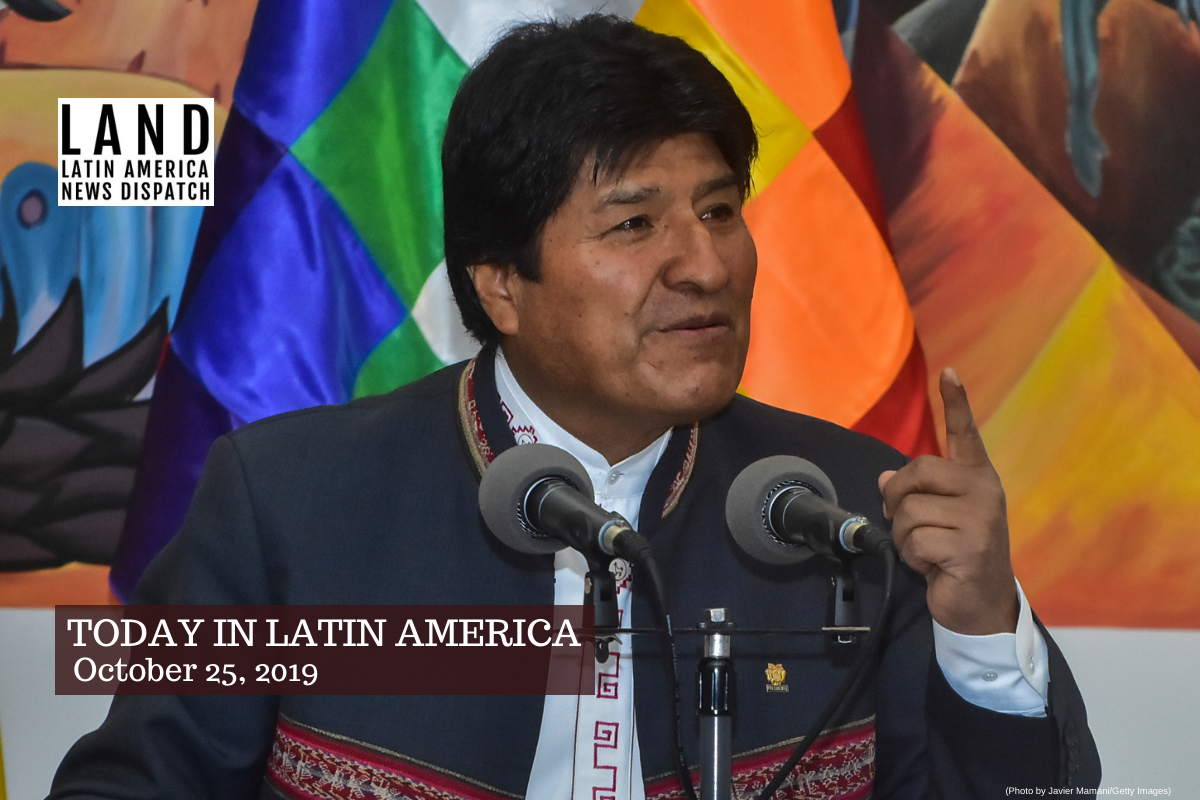 BOLIVIA: Bolivia’s Supreme Electoral Tribunal declared President Evo Morales the winner of Sunday’s election last night, following days of protests and accusations against Morales of election rigging. The Organization of American States had expressed concern over the quick shift in the results from Sunday night to Monday morning that gave Morales —who has governed the country for nearly 14 years— just enough points to avoid a runoff. The shift sparked protests in some regions of the country where ballot boxes and electoral offices were set on fire.

“For the first time in Morales’ nearly 14 years in power, the race was close from the beginning,” wrote journalist Linda Farthing about the election and the fallout from La Paz.

CHILE:  Protesters returned to the streets yesterday despite the welfare package that President Sebastian Piñera promised earlier this week to mitigate the economic inequalities in the country. The demonstrations started last week when the government announced a 4-cent increase in public transportation fares. As of today, 18 people have died in the violent confrontations between protesters and the military and at least 5,000 have been arrested. At least five deaths were caused by the military, according to Chile’s National Institute for Human Rights.

BRAZIL: A new policy brief from the Peterson Institute for International Economics warns that by 2021, the Amazon rainforest might not be able to sustain itself due to the high rates of deforestation and land degradation that it has faced over the last few years. The report, written by economist Monica de Bolle, sparked controversy among climate scientists, according to The Guardian. For most of them, the tipping point of the most biodiverse forest on the planet is 20 years on the horizon. But according to the document, if deforestation rates keep increasing at the pace of the last year —when deforestation increased 222 percent— the point of no return is just around the corner.

CUBA: Cuba’s state airline canceled seven international flight routes after the United States issued new sanctions this week. The routes include travel to the Dominican Republic, Mexico, Venezuela, Haiti, Martinique and Guadeloupe. Cuban state media reported that countries contracting flights out of Cuba had canceled their business after the U.S. Department of Commerce’s announcement to revoke their licenses last Friday. Domestic flights are also expected to be affected by the new policy.

HONDURAS: Protests in the capital turned violent yesterday, as Hondurans continued their calls for the removal of President Juan Orlando Hernández. Protesters impeded major roads and vandalized buildings while police used tear gas to disperse the crowds. Political analyst Raúl Pineda told the AP that only three options remain for the president: rectify his behavior, open a dialogue with the opposition or resign. Honduras’ Channel 5 News said on air that “the path to social peace passes through the president’s resignation.” The opposition coalition is led by Salvador Nasralla, a former presidential candidate and television personality. They have promised that the civil disobedience will continue until the president is removed.

COSTA RICA: Minister of Finance Rocío Aguilar resigned yesterday after the country’s Comptroller’s Office recommended sanctioning her for unauthorized payments towards the public debt, according to reporting by The Tico Times. Aguilar approved a $300 million payment towards the debt last year without receiving approval from the Legislative Assembly. Aguilar justified the action, saying it was an emergency situation that would have resulted in a financial sanction if she had acted otherwise. President Carlos Alvarado praised the former minister, saying “her hard work was key to stabilize and clean up public finances.”

MEXICO The Associated Press reported that avocados have brought both riches and violence to Mexico. In the state of Michoacán, the heartland of world production of what the fruit locals call “green gold,” small-scale avocado growers armed with rifles take turns manning a vigilante checkpoint to guard thieves and drug cartel extortionists after the rise in avocado production drew the attention of gangs and hyper-violent cartels. The rising violence is threatening the newfound prosperity and some growers are taking up arms.

MEXICO Officials in Michoacán say they have located a sixth victim in the crash of a small plane this Wednesday. The state public safety agency said that the flight was headed to the southern state of Guerrero. The prosecutor’s office says the 32-year-old pilot’s body was recovered Thursday. Authorities had confirmed the deaths of five people aboard the aircraft Wednesday.

UNITED STATES: On Wednesday the Trump administration said it does not expect to see progress in Mexico’s fight against organized crime unless the highest level of the Mexican government shows political commitment and develops a comprehensive strategy to confront it. Rich Glenn, deputy assistant secretary of state for international narcotics and law enforcement affairs, also raised concerns about events in the northern city of Culiacán last week, in which attacks by cartel gunmen led Mexico’s government to release Ovidio Guzmán, son of drug lord Joaquin “El Chapo” Guzmán. President Andrés Manuel López Obrador defended the decision arguing that saving lives was more important than any arrest.