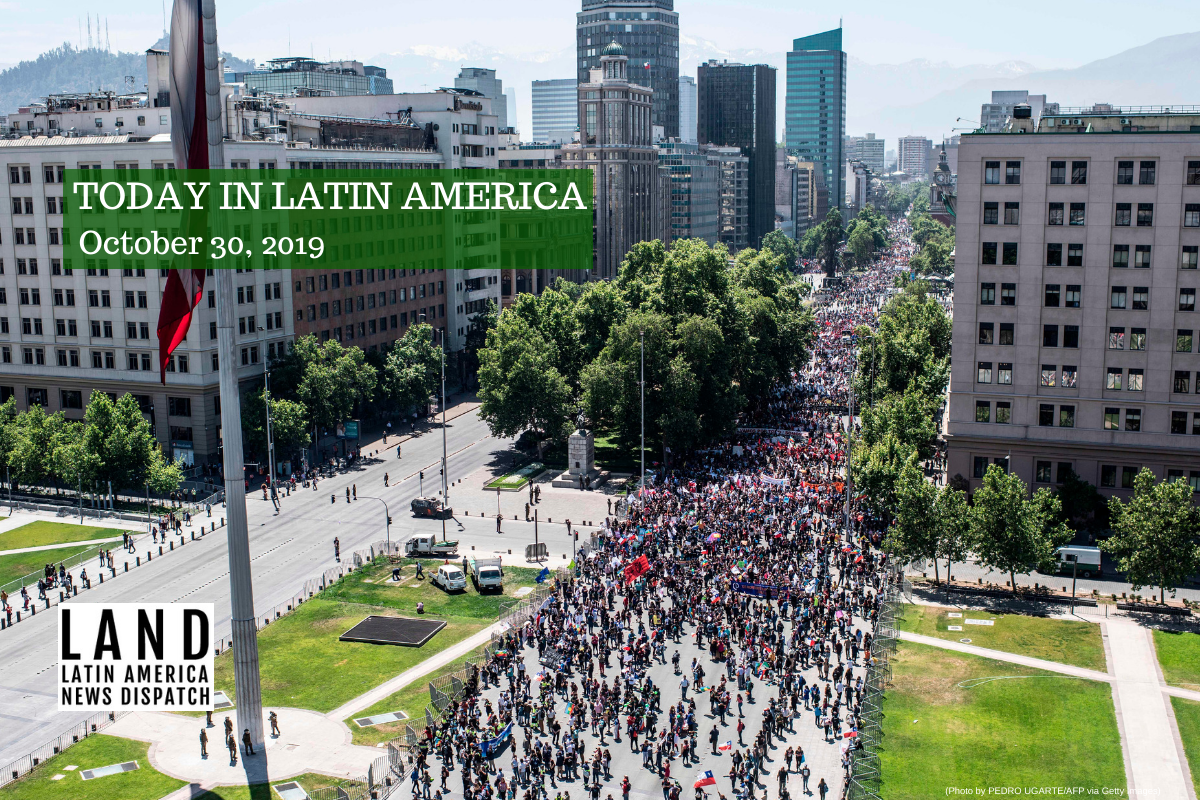 People demonstrate in the surroundings of La Moneda presidential palace in Santiago, on October 30, 2019, during protests against the government economic policies. (Photo by Pedro Ugarte/AFP/Getty Images)

CHILE: Renewed protests in Chile yesterday called for a new constitution and the ousting of President Sebastián Piñera. The protests are entering the 13th day, despite Piñera’s promise to replace eight cabinet ministers, increase wages and pensions and decrease the cost of necessities like medication and electricity.

Meanwhile, protesters gathered in the United States to show support for the ongoing demonstrations in Chile. Approximately 80 people met in New York City’s Times Square, waving Chilean flags, chanting, and making music with everything from guitars to mini frying pans.  Demonstrators in both countries hope that replacing the dictatorship-era constitution will allow the Chilean government to address the pension and health systems and the privatization of water.

BOLIVIA: Protests continued for the second week against alleged fraud in the election that won Bolivian President Evo Morales a fourth term. Sympathizers of the MAS opposition party have accused Morales of rigging the first round of voting to avoid a united opposition in a runoff. The transportation sector joined the protest, with truckers leading the charge against police barricades on yesterday. Morales has denied the allegations.

VENEZUELA: A “solidarity conference” in Brussels raised $133 million to help alleviate Venezuela’s refugee crisis yesterday. The 120 delegations in attendance also worked to increase sanctions on Nicolás Maduro’s government. Over 4.5 million people have fled the country, which could soon outpace the number of people who fled the Syrian civil war. The delegations hope to meet again next year.

COLOMBIA: A local community has accused the Colombian army of torturing and killing a rural human rights defender on Monday. Family and community members said Flower Jair Trompeta was detained by army troops after he complained that they destroyed plants on his farm, and he was found dead two hours later. The community leader’s hands were also put through a coffee pulper machine before he was killed. Authorities are investigating the crime, but have not yet confirmed the suspected killers.

HAITI: Chaos erupted in Haiti over the weekend, as two people were killed in anti-government protests. Earlier in the day, police officers presented their grievances over low pay at the headquarters of the national police force. They then protested in the country’s capital. Later in the day, a person fired shots into a crowd of protesters demanding President Jovenel Moïse step down. One person died. Then protesters set fire to the person believed to be responsible for the shots: he was beaten and burned to death. Moïse has been accused of embezzlement.

CUBA: Cuban President Miguel Díaz-Canel and other top officials visited with Russian President Vladimir Putin yesterday to discuss expanding relations. Putin lauded the Cuban government for withstanding political pressure from the United States and indicated that Russia might be willing to help the country continue to do so.

HONDURAS: An alleged Honduran drug trafficker was killed, after evidence implicated him in a drug ring involving the country’s president and his brother. Nery Orlando López Sanabria was killed in prison on Saturday, while talking to the prison director. López had previously changed his name and faked his own death in order to protect himself. But the trial of Juan Antonio “Tony” Hernández brought his discretions back into the light. President Hernández has denied any wrongdoing.

MEXICO: London authorities detained the wife of former Veracruz Governor Javier Duarte yesterday, after Mexico sought her extradition on charges of fraud. Karime Macías, who worked under Duarte’s administration, was accused of using public funds to purchase private, luxury goods. In 2017, authorities seized a warehouse full of illegally-obtained items and other evidence, including a diary written by Macías. Macías had already fled to London. Duarte was arrested in Guatemala in 2017 and is still awaiting trial for charges of money laundering and embezzlement. Macías will face a London judge this week, who will decide if she will be taken into custody or released under supervision.

MEXICO: Members of The Mexican Alliance of Drivers Organization continued a strike across 32 states in Mexico yesterday, blocking principle access lanes into Mexico City. Truck and bus drivers have also surrounded the country’s congressional building, as they demand lower highway tolls and fuel costs, as well as a ban on double-trailer trucks. The alliance used the protests to call attention to abuses of transportation workers by authorities.

The U.S. Department of Homeland Security later confirmed that over 200,000 Salvadoran TPS work permits would be extended until Jan. 4, 2021 to account for a “winding down” period as TPS holders return to El Salvador.  Representatives of the Salvadoran government said the agreement would also allow those residing in the United States to continue to lobby for a law that would naturalize TPS holders. The Trump administration said the extension is primarily to give TPS holders more time to return to their countries and is not a reversal of its decision to end TPS.