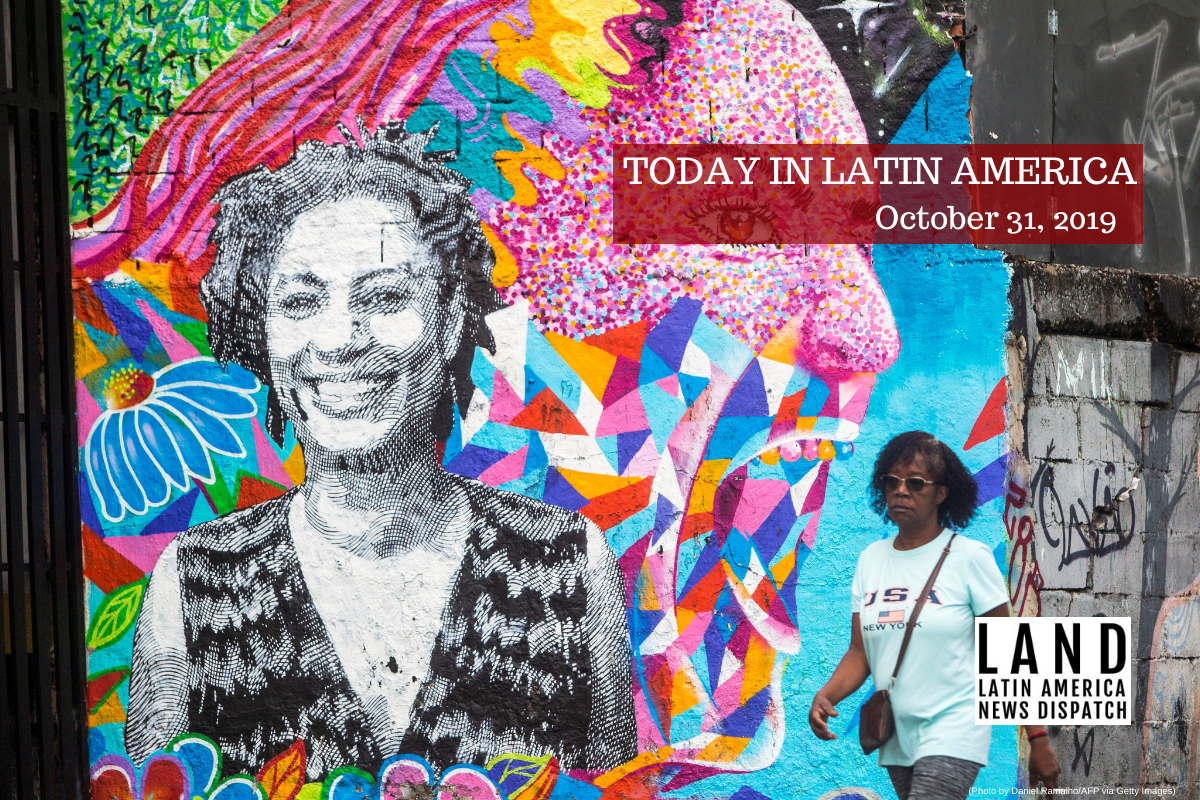 BRAZIL: President Jair Bolsonaro vehemently denied any connection to the former policemen linked to the killing of Marielle Franco, the former Rio de Janeiro city councilwoman. In a live video lasting over 20 minutes, Bolsonaro denied any wrongdoing and accused the media of trying to damage his government and the country. The video was recorded at 4 a.m. in Riyadh, where Bolsonaro was on an official visit to Saudi Arabia. Bolsonaro threatened to cancel the license of Globo, Brazil’s largest TV network.

On Tuesday, TV Globo reported that the suspected killers of Franco met at Bolsonaro’s home in Rio de Janeiro only hours before Franco was shot and killed. The suspects gained access to the compound by stating that they were visiting “Mr. Jair,” according to the property’s security guard.

BRAZIL: Police shot and killed 17 suspected drug traffickers in the Amazonas state. Authorities were tipped that 50 alleged drug traffickers of the Família do Norte (FDN) group were headed to the city of Manaus to confront members of the Comando Vermelho group. No police officers were injured in the 5-hour shootout, while the other suspects fled the scene.

CHILE: The Chilean President Sebastián Piñera announced that two upcoming international summits would be canceled, the Asia-Pacific Economic Cooperation (APEC) and U.N. global climate meetings (COP 25), due to the past two weeks of protests in the country. The chaos has left at least twelve people dead and hundreds more injured, as shops and public buses are burned and vandalized. US President Donald Trump and Chinese President Xi Jinping were expected to sign “phase one” of a trade deal at the upcoming APEC summit. The countries are now looking for another location. The cancellations highlight the intensity of the protests throughout the country and contradict earlier statements by the government that there was “no chance” the demonstrations in Santiago would disrupt the two events.

ARGENTINA:  Britain returned a statue stolen during the Falkland War to Argentina, in an emotional ceremony held at the Vatican. A small statue of the Madonna was taken from the Falkland Islands, or Las Malvinas, thirty-seven years ago, once the war ended. On Wednesday, Pope Francis presided over a ceremony between Bishop Paul Mason of Britain and Bishop Santiago Olivera of Argentina, where the statue was returned. Statues of Our Lady of Luján, a popular icon of the Virgin Mary in Argentina, were brought by Argentine soldiers for protection during the invasion of the islands. Pope Francis also blessed and kissed a gravestone for the tomb of an unknown Argentine soldier during the exchange.

COLOMBIA: On Tuesday, a massacre in Cauca left five indigenous Neehwe’sx, including a community leader, dead. Four members of the Nasa voluntary community guard and Cristina Bautista, authority and spiritual leader of the Tacueyo reservation, were killed in an ambush on Tuesday. Six others were injured in the attack when their group of armored SUVs was shot at by individuals said to belong to the Revolutionary Armed Forces of Colombia (FARC). President Iván Duque sent the interior minister to the area, also ordering the military to increase its presence in the area to find the attackers. Some FARC members continue to live and expand their territory in areas where the Nasa also live, leading to clashes and dozens of deaths of indigenous people. The Colombian government has received requests from the United Nations that it do more to protect its indigenous people.

BOLIVIA: The Organization of American States is sending a 30-person team to Bolivia this week to audit the October 20 presidential election results in which incumbent President Evo Morales declared victory, securing a fourth consecutive term. The “binding” audit comes as a response to the protests and allegations of manipulation that have erupted after election results went off the air the night of the election and came back up a day later showing Morales as having the necessary 10-point lead over his rival Carlos Mesa to win the election outright and avoid a runoff. The audit will look at the day of the election as well as the subsequent days, focusing on calculations, ballots and ballot boxes, and the informatics process. Results are expected in the next 10 to 12 days.

PANAMA: On Tuesday, hundreds of demonstrators took to the streets of Panama in protest of proposed constitutional reforms. A group of protesters tried to storm Panama’s National Assembly forcing lawmakers to suspend their session, but the police eventually dispersed the crowds with pepper spray. The reforms, which were approved at the makeup session yesterday, would increase the power of the Assembly by allowing it to change the national budget, set salaries for congresspeople, and supervise investigations of judges and prosecutors. Other points of contention among the reform package are inmigration regulations and the lack of a same-sex marriage proposal. The perimeter of the Assembly was lined with barbed wire as protests continued yesterday for the fourth consecutive day.

MEXICO: Defense Secretary Luis Cresencio Sandoval showed new video footage on Wednesday of Mexican security forces attempting to detain the son of Joaquin “El Chapo” Guzmán before being forced to let him go by cartel gunmen. The footage comes after thirteen people were killed across Mexico City before officials called off the operation to avoid more deaths. According to the timeline of the Mexican government, the U.S. government requested Ovidio Guzmán Lopez’s arrest for extradition on Sept. 13, almost a month before a special anti-drug unit conducted the attempted arrest.

U.S.-MEXICO BORDER: Over the past year, the United States has detained more migrant children at the border than during any other period on record, according to a new report. Border officials apprehended a total of 76,020 traveling without their parents in the past fiscal year. The Trump administration has attempted to slow down migration from Central America by separating thousands of children from their relatives, further increasing the number of children in federal shelters.