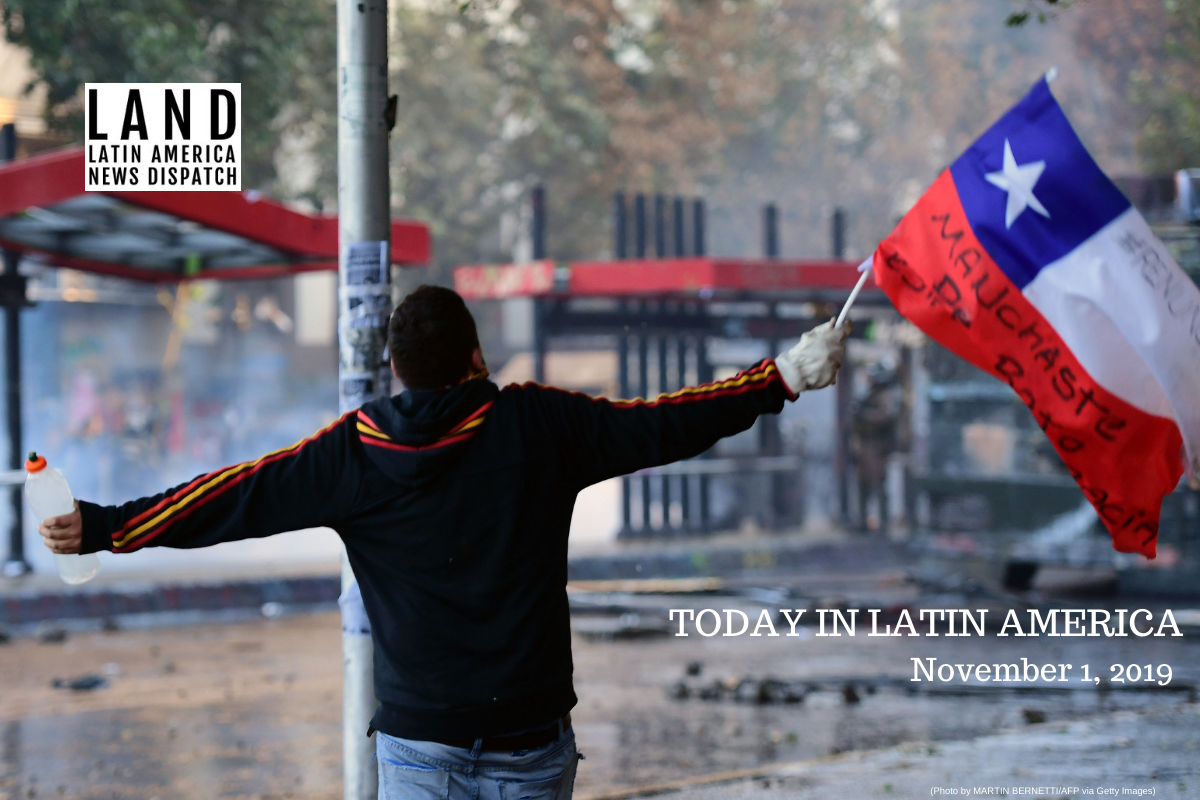 A demonstrator waves a national flag during a protest against the government's economic policies in the surroundings of La Moneda presidential palace in Santiago, on October 31, 2019. (Photo by MARTIN BERNETTI/AFP via Getty Images)

CHILE: Yesterday Spain offered to host the United Nations annual climate conference (COP25) after Chile announced that it could not sustain the event due to the ongoing protests, according to El País. On Wednesday, Chilean president Sebastian Piñera said that the country had to focus on “re-establishing public order” and could no longer host the conference. The capital city of Madrid will have to prepare in just one month for the 25,000-people event, in which 200 countries gather to present their progress in the battle against climate change.

ARGENTINA: Former president Cristina Fernández de Kirchner will be judged in one of three corruption criminal cases against her. Yesterday, a second court ruled in favor of continuing the criminal investigation against Fernández de Kirchner in the so-called “corruption notebooks” scandal, reported El País. The judge of the case accused the former president of leading a bribery network against hundreds of companies that held contracts with the government.

BOLIVIA: Since Evo Morales was re-elected as president, at least two people were killed in protests, Bolivian authorities said yesterday. According to the AP, health officials in the city of Santa Cruz said that two people were fatally shot in the nearby town of Montero, where protests erupted on Oct. 20. Bolivian Interior Minister Carlos Romero said the political opposition was responsible for the killings because they refuse to admit Morale’s victory and have accused him of electoral fraud. In response, the government said that the Organization of American States (OAS) will send a 30-person commission to the country to evaluate the electoral results.

COLOMBIA: Survivors of Bojayá Massacre will finally receive the bodies of the 82 people who were killed in the violent attack 17 years ago. The Public Prosecutor’s Office announced that on Nov. 11, they will hand over to the survivors the remains 82 people and 9 unborn children that were killed in Bojayá, a small town in the river banks of the Atrato river. In May 2002, a cylinder bomb launched by the FARC guerrilla fell on the San Pablo Apóstol Church, where people took shelter due to the violent confrontations between the FARC, paramilitary groups and the Colombian army. As a result, 119 people were killed and their bodies were identified in 2017.

PUERTO RICO: The Secretary of the Department of Natural Resources Tania Vázquez Rivera stepped down from her position yesterday, days after FBI agents visited her department in compliance with a federal probe. Vázquez announced the investigation earlier this week and said that she had also previously submitted documents to the FBI. Vázquez did not comment any further on the details of the investigation.

JAMAICA: Jamaica signed a bilateral security agreement with the United States on Wednesday, in a joint cooperation to fight transnational crime. The agreement follows a long-standing memorandum of understanding with the United States that allowed for the sharing of intercepted information and increased resources for the Maritime, Air and Cyber Command of the Jamaica Defence Force. The Minister of National Security, Horace Chang, told Jamaica’s House of Representatives that other security agreements were being negotiated with both Canada and the United Kingdom.

PANAMA: A group of University of Panama students and other protesters testified before a federal court yesterday after they were arrested at this week’s constitutional reform demonstrations, according to La Prensa. The students were called to testify about protests that occurred on Wednesday night and ended with police throwing tear gas into the crowds. They were released shortly after their testimonies. University of Panama’s Dean of the Faculty of Law Ana Matilde Gómez said the arrests were a mistake. “Nobody wants violence. The students have a critical thought and are part of this whole national event and freely decided to participate in a protest that was evidently peaceful,” said Gómez. More than 50 people were arrested during the demonstrations this week, including a former presidential candidate and 11 foreigners.

NICARAGUA: Human rights organization Transparency Nicaragua released a report denouncing the government’s compliance with public information laws, saying only three out of 64 state agencies comply with publishing records of their activities, according to La Prensa de Nicaragua. The report calls the lack of public access to information a “breach of the law” and cites Article 20 of Nicaragua’s Law on Access to Public Information, which mandates federal agencies publish and disseminate information on services, public service programs, salaries of public employees and broader financial audits. At least 10 departments publish no public information. The report comes after another third party organization, Barometer of the Americas, called Nicaragua the least democratic country in Latin America.

MEXICO: Mexico’s National Human Rights Commission says there are more than 30,000 unclaimed and unidentified corpses and skeletons piling up at morgues across the country. There is a crisis in the area of forensic identification because of lack of funding, personnel and equipment to examine bodies, said the governmental commission. Mexico’s mounting wave of homicides over the last decade and the overcrowded morgue has raised concerns among residents of the city of Guadalajara.

MEXICO: Yesterday President Andrés Manuel López Obrador spoke with Justin Trudeau, prime minister of Canada, about T-MEC, the trade agreement between the United States, Canada, and Mexico that has already been signed but not ratified. In the conversation, AMLO congratulated Trudeau for his recent re-election and then shifted to the importance of convincing the United States Congress of how beneficial the agreement is for the three countries.