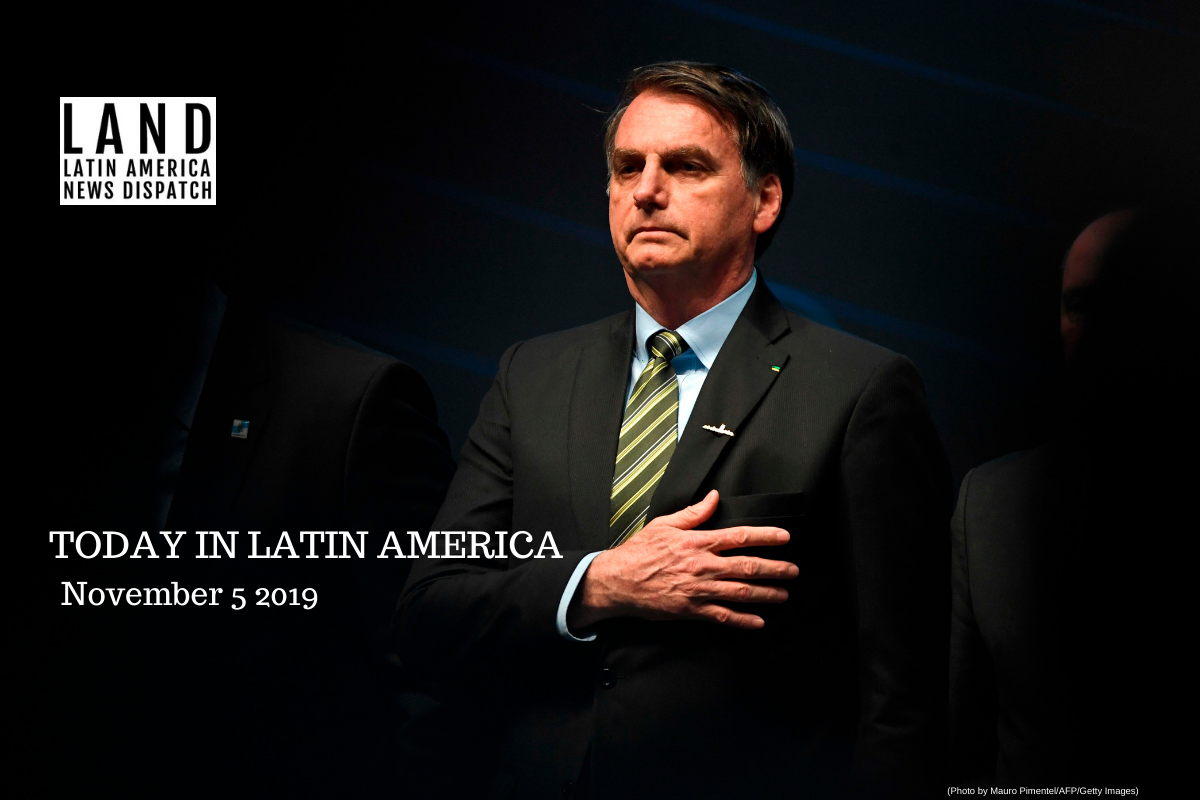 BRAZIL: A representative of President Jair Bolsonaro’s government interrupted a children’s play called “Abrazo” about a fictional dictatorship. According to the state-owned bank that owns the theater, the performers were in breach of contract. However, “Abrazo” is among a growing list of shows and other artistic projects that have been shut down since Bolsonaro became president.

CHILE: After a short break in the recent wave of demonstrations, thousands of Chileans gathered yesterday to demand better social services and an end to economic inequality. The protest was small in comparison to earlier demonstrations, which started after the government announced an increase in subway fares. However, yesterday’s demonstration shows that the protest movement has not waned. Although most demonstrators marched peacefully, some threw rocks at police officers and police responded with tear gas and water cannon blasts. The protesters continue to demand a new constitution to replace the 1980 charter written under General Augusto Pinochet’s military dictatorship, which allows social services and natural resources to be privatized.

BRAZIL: During a Sunday night television interview, President Jair Bolsonaro warned “the worst is yet to come” in reference to an oil spill that has spread across 1,300 miles of the country’s coastline. The Brazilian government is attempting to determine the cause of the spill that has affected 321 beaches since September. Bolsonaro and Brazilian prosecutors believe Delta Tankers Ltd, a Greek shipping company, is the culprit. The company issued a statement in response to the government’s accusations saying it did not find any evidence of leakage after reviewing the ship’s cameras and sensors. Authorities consider the spill to be one of Brazil’s worst environmental disasters.

BOLIVIA: A helicopter carrying President Evo Morales made an emergency landing yesterday. Bolivia’s Air Force reported that there had been a problem with the helicopter’s tail rotor. No injuries were reported. Morales is currently embroiled in a dispute over the results of the Bolivian presidential elections, currently under audit by the Organization of American States.

CUBA: On Sunday, the closing of a solidarity conference called the “Anti-Imperialist Meeting of Solidarity, for Democracy and Against Neoliberalism” in Havana served as a platform for Communist Party leader Raúl Castro to issue a call to fight U.S. intervention in Latin America. Cuban President Miguel Díaz-Canel and his Venezuelan counterpart Nicolás Maduro accompanied Castro to the meeting that drew over 1,300 social activists from the region.  Cuban Foreign Minister Bruno Rodríguez expressed concern regarding U.S. policy toward Cuba.

PUERTO RICO: CVS issued an apology yesterday after rejecting a Puerto Rican ID from a college student in Indiana. NBC reports that José Guzmán Payano, a junior at Purdue, went to his local CVS store to purchase some Mucinex on Oct. 25, when a store employee demanded a state-issued ID card. According to Guzmán Payano, the employee repeatedly told him that the store could not accept his identification, then asked him for his visa. When asked about the incident, a CVS corporate spokesperson told Latino Rebels that they are “fully investigating this matter.”

We just heard back from the mother tonight and she told us that @cvspharmacy finally personally apologized to her and her son today, 9 days since she made the complaint public.

COSTA RICA: The Costa Rican telecommunications regulators (Sutel) vowed last week to provide internet to Indigenous communities across the country. Valued at $47.9 million, the contract includes the installation of broadband internet in over 750 communities, including 57 schools on the Caribbean coast and 62 in the south of the country. The government expects to complete the project in 14 months.

UNITED STATES: Milwaukee police have arrested a 61-year-old white male suspected of throwing battery acid at a Hispanic man yesterday. The assault happened Friday night and the police are investigating it as a hate crime. The victim of the attack, Mahud Villalaz, suffered second-degree burns to his face. Villalaz said the attack took place after a confrontation over how he parked his car. Video surveillance shows the confrontation, but there is no audio to back up the claims that the suspected man said discriminatory remarks to Villalaz before assaulting him. Milwaukee Mayor Tom Barrett expressed shock and blamed President Donald Trump for “inciting hatred against minorities” during a press conference. Charges are expected to be announced today.

MEXICO: Over the last six years, common graves labeled as “No Name” have accumulated over 14,000 unidentified bodies. An investigation by Milenio shows that bodies from over 28 states have been buried under the label “NN,” or “Ningún Nombre.” An estimated 11 out of every 100 bodies have been classified as victims of “intentional homicide,” but were never identified and sent to common graves. The National Human Rights Commission made a statement last week saying there are more than 30,000 unclaimed and unidentified bodies, and an unknown amount of skeletal remains, in morgues.

MEXICO: Fallen ash has appeared on the southern edge of Mexico City after increased activity from the Popocatepetl volcano. The national civil defense office released a statement Sunday saying they expect to see ash continue to fall and drift toward Mexico City. However, the office does not anticipate any eruptions worse than those that have already occurred in the last few years. The Popocatepetl volcano is located 45 miles southeast of the capital and has been particularly active this year.