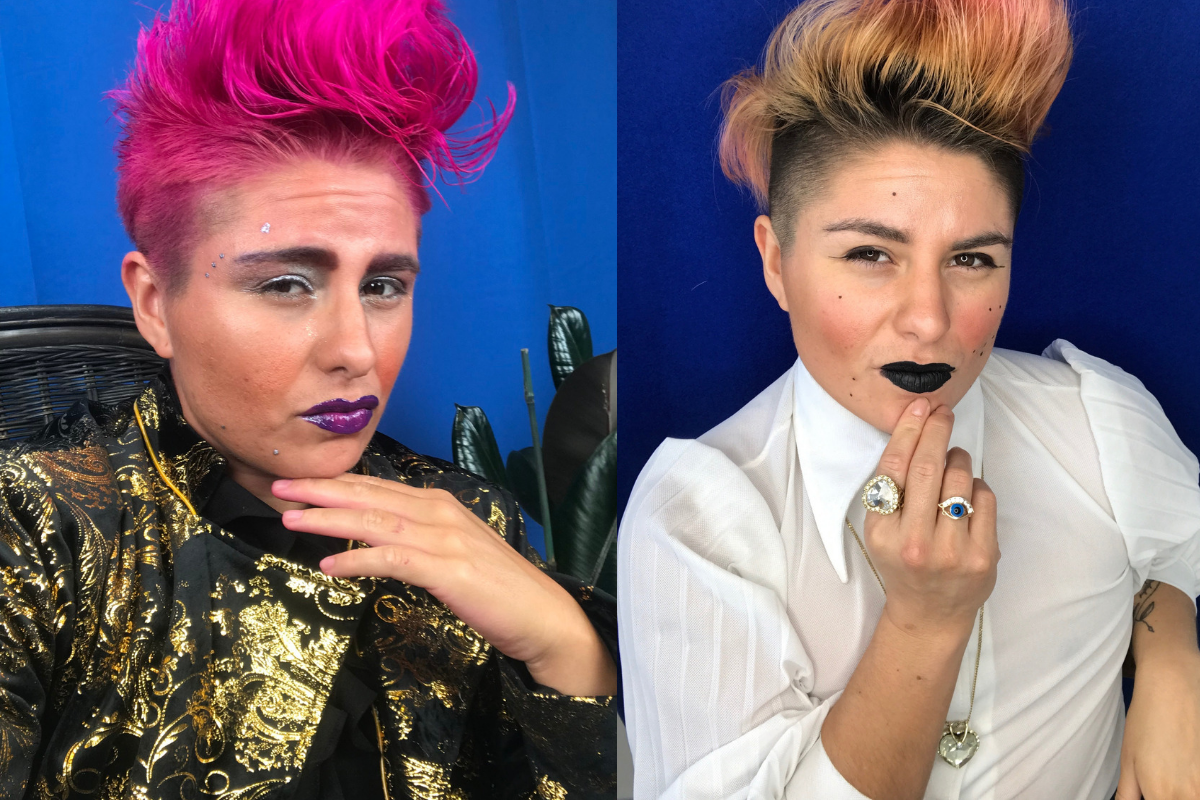 Two of astrologer's Celia Sagastume's many looks. (Photo via Sagastume)

Every evening, towards the end of Univision’s Primer Impacto broadcast, Spanish-speaking families across the U.S. and Latin America eagerly awaited the most important story of the day: what the astros had in store for their lives. Walter Mercado, an actor and former dancer turned astrologer who passed away at age 87 on November 2, was viewed by an estimated 120 million per day.

As astrology has become popular particularly among millenials today, young people who follow astrology remember Mercado as the person who deeply inspired them, with his extravagant gender-bending persona and alternative beliefs.

“Since I was a kid, I would just be like, ‘How do you get to be so fabulous and so queer and so strange and be on like television and be watched by my family and a lot of Latinos in the United States,” Celia Sagastume, a trans Latinx astrologer and the resident reader for two websites, told Latino USA. “And so literally in my 20s, I was like, you know what? I know social media. I know how to do video. And I’m just gonna do this myself, and I started doing video horoscopes online.”

Sagastume was also one of the organizers of the first queer astrology conference in San Francisco in 2013—her work seeks to decolonize astrology by also delivering Mayan and Aztec divinations.

For her, Mercado was an inspiration that inspired her look and the way she delivers horoscope readings.

“I do video horoscopes every week, and I do them kind of in a similar way as Walter… at the end of it, I end everything with ‘Con mucho, mucho, mucho amor,’” Sagastume said about her style, which she took on even before being hired by different websites. Mercado would sign off his message, wishing viewers in Spanish, “Peace, a lot of peace, but above all lots and lots and lots of love.”

“Latinx people would be like ‘Oh my God! Walter!’ and they’d instantly get it,” she added.

While some have pointed out that Mercado didn’t openly identify as queer, Latinx in the LGBTQ community still felt he was a role model who paved a way for them to feel more comfortable in their truth.

“He never identified as queer, but it felt like he refused to be constrained by gender norms and antiquated ideas of masculinity,” tweeted comedian and writer Gabe Gonzalez.

He never identified as queer, but it felt like he refused to be constrained by gender norms and antiquated ideas of masculinity.

He even rejected our understanding of time. When an interviewer once asked his age, Walter Mercado responded "Soy ageless."

Christopher Viñales, a Puerto Rican-Dominican Afro-Latino from the Bronx and a City University of New York student, said that Mercado made him realize it was also okay to deviate from mainstream religions.

“I do feel that it was a reinforcement that I didn’t have to conform to the religious traditions the wider culture of our people told us to believe in, that it was okay to be alternative. Spiritually, you just have to find a spiritual path that works for you,” he said.

Viñales isn’t a strict follower of astrology, rather he is a practitioner of African-based spiritual practices, specifically Regla de Ocha and espiritismo.

For many Latino households with working-class families living paycheck to paycheck who often might feel uncertainty about their future, Mercado seemed to offer a sense of hope and something that was certain.

In an academic essay, University of Florida professor Tace Hedrick called this phenomenon “sabiduría oriental,” writing, “More than a century of a Latin American (and United States) fascination with the kind of sabiduría oriental —astrology, reincarnation, tantric knowledge— to which Mercado’s performances appeal, beginning with the mid-nineteenth-century arrival in Latin America, and especially Puerto Rico.”

Cosmic terms like Mercury Retrograde or Mercury in Retrograde (which we’re in one right now by the way) have become widely known and even reported on. It was recently used in a New York Times article when describing wild fires in California.

“Catholicism, Christianity, Judaism… A lot of younger folks are no longer identifying with those religious spiritual institutions… we’re becoming very aware of how power is within these institutions and how dogmatic they can be,” Sagastume said, “but human beings tend to want to have some kind of spiritual beliefs. Something that goes outside of their day to day life. Something that is more about the spiritual realm and imagining us being larger and inhabiting much more energetic fields than just the physical ones that we exist on a daily basis.”

However, Mercado’s appeal wasn’t only about astrology. It was also about his message of love and the way he delivered it—he had charisma, enchanting households with his regal outfits and the way he caressed words as he spoke.

“He was gentle and kind and loving, but there was also a kind of regalness that he had… and we’re talking about Walter Mercado who was very openly visible about his queerness because he wore that on his body, he wore capes, different colors, he had mannerisms that were very coded as queer and people no matter what decided that they were going to respect him because he demanded that,” Viñales said.

Mela Pabón, a very popular astrologist from Puerto Rico, called Mercado an icon on an instagram post following his death, saying that she was grateful he approved of her work.

While people now have an array of options about where and who to get their astrology from, the impact of a single man, Walter Mercado, will endure. And as conversations about queer representation and violence against LGBTQ Latinx folks continue to be uplifted, for those in the community, especially Puerto Ricans, he represented hope.

“As a queer Boricua, as a queer Latino in general, I feel like Walter’s presence was one that we found a figure who represented a part of us that the rest of the society would not respect, except that people really did respect Walter and that is a very important thing to see,” Viñales said, “You see all of these horror stories about homophobia and machismo, it hurts, and then when we see all of that juxtaposed to the reverence that Walter was able to garner from those same people, I guess there’s like a hope. If they can respect Walter and his exuberance and his opulence and all of that, maybe they can respect me.”