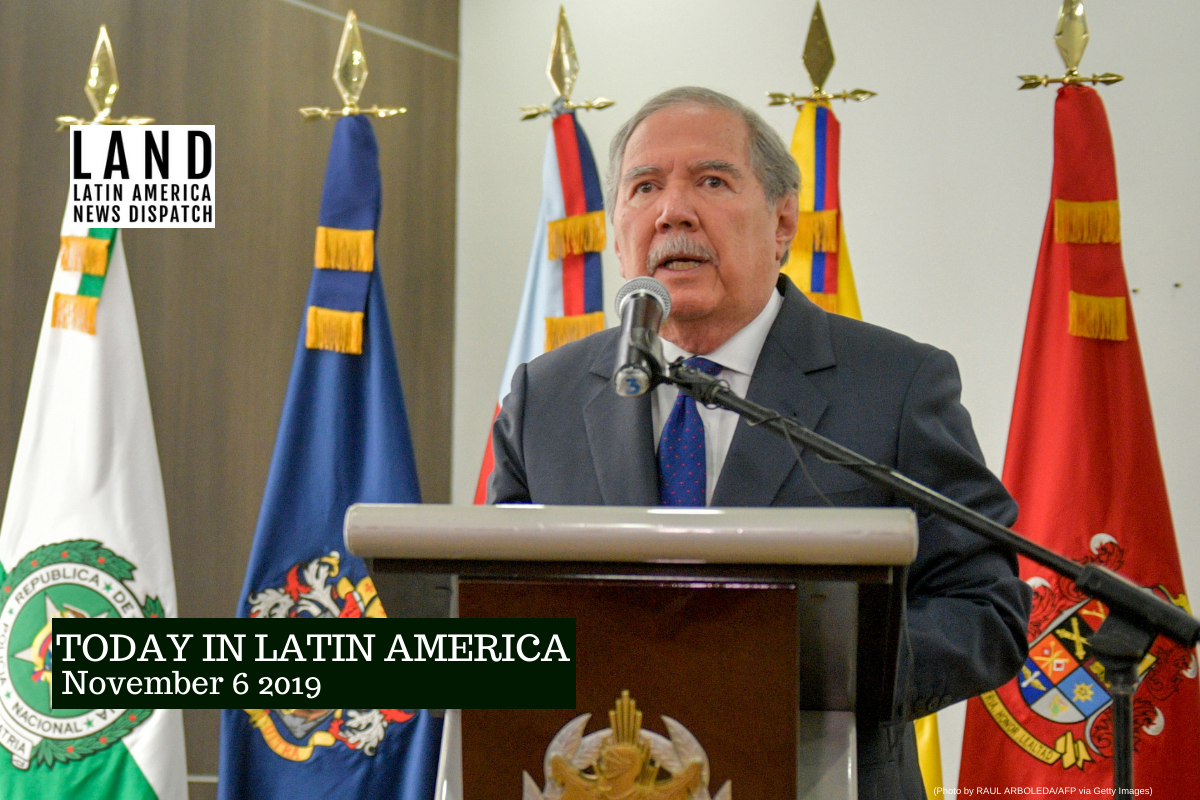 COLOMBIA: Defense Minister Guillermo Botero resigned yesterday after a congressman revealed a forensics report identifying the murder of eight underaged kids in an army bombing in the department of Caquetá. Botero had previously presented the bombing as an “impeccable operation” against “narcoterrorists.” Botero had denied having knowledge of the death of the eight minors ages 12-17 despite the warning of child recruitment by several government agencies. Botero resigned before Congress could hold a no-confidence vote which would have been the first time in the country’s history that a minister is sacked by the legislature. General Luis Fernando Navarro will serve as the interim defense minister.

BRAZIL: Brazil held its most expensive oil auction since 2010 on Wednesday, securing nearly $17 billion after awarding the biggest blocks to Chinese state-owned oil firms. Some of the world’s biggest oil firms, including the United States’ ExxonMobil, were anticipating the event, but only a few ended up participating. The auction was considered a success by Brazilian energy officials. Still, the total amount of proceeds fell short of the $26 billion the government could have obtained if all the blocks available had been auctioned.

PERU: Judge Jorge Chavez ordered the arrest of 14 lawyers in relation to the Odebrecht scandal on Monday. Each lawyer will be held in preventive detention for 18 months while they are investigated for their alleged participation in a corruption scandal benefiting the Brazilian construction company. The scheme allowed the conglomerate to profit at least $250 million in Peru alone, by securing lucrative public works projects in exchange for bribes, an exchange mirrored in several other Latin American countries. Four previous Peruvian presidents have been jailed or investigated for fraud as a result of the scandal, with former President Alan García committing suicide before he could be arrested by police.

COLOMBIA: Colombia’s Constitutional Court overturned a 1989 law mandating the order of surnames that children receive at birth, first the father’s and then the mother’s. In a tradition dating back to Spanish colonization, the father’s last name has always been placed first. This tradition was challenged on the grounds that it violated the right of equality, in a lawsuit filed by attorney Juan Pablo Pantoja. Parents may now choose the order of the last names they give to their children. Colombia follows the lead of Argentina and Uruguay who have already abolished the system of patrilineal last names, citing progress for women’s rights in the country as well as for LGBTQ couples.

PUERTO RICO: Yesterday, the FBI arrested Senator Abel Nazario along with seven other people as part of a corruption probe into the mismanagement of municipal funds. Nazaio, who is a member of the island’s New Progressive Party, is accused along with his former municipal employees of theft or bribery for illegally using over $5,000 in municipal funds to pay “ghost employees” who worked on Nazario’s senatorial campaign. Nazario was also arrested 14 months ago during his time as Yauco’s mayor. He is awaiting trial for defrauding his employees. Senate President Thomas Rivera Schatz asked for Nazario’s resignation, though Nazario has said he is innocent and will not step down.

HONDURAS: Juan Orlando Hernández’s government awarded the Honduran armed forces an agricultural project worth over $150,000 to execute the country’s new Agricultural Development Program. The program’s objective, which will be headed by the Secretariat of National Defense and a newly created agricultural wing of the armed forces, is to increase the productivity and profitability of Honduras’ agricultural sector as well as work to develop an entrepreneurial approach to agriculture across the country. The project will be funded by the Ministry of Finance and estimates to have a total of 60,000 producers across Honduras trained in different agricultural and ecological techniques.

GUATEMALA: The citizen’s registry organ of Guatemala’s Supreme Electoral Tribunal (TSE) ordered the cancelation of the President Jimmy Morales’ National Convergence Front (FCN-Nación) party. The registry’s decision comes after an investigation found that the party violated financial and electoral campaign rules. The probe into complaints filed by Guatemala’s attorney general revealed that FCN-Nación failed to report over $10 million in campaign financing back in 2015 when Morales was elected. FCN-Nación has until Friday to appeal the cancelation. If the cancelation occurs before the newly elected government is sworn in on January 14, FCN-Nación will lose its spot in the country’s Human Rights Commission, three spots in the Guatemalan Congress board of directors and 10 heads of legislative commissions. If the cancelation happens after the inauguration, FCN-Nación could lose eight representatives in Congress.