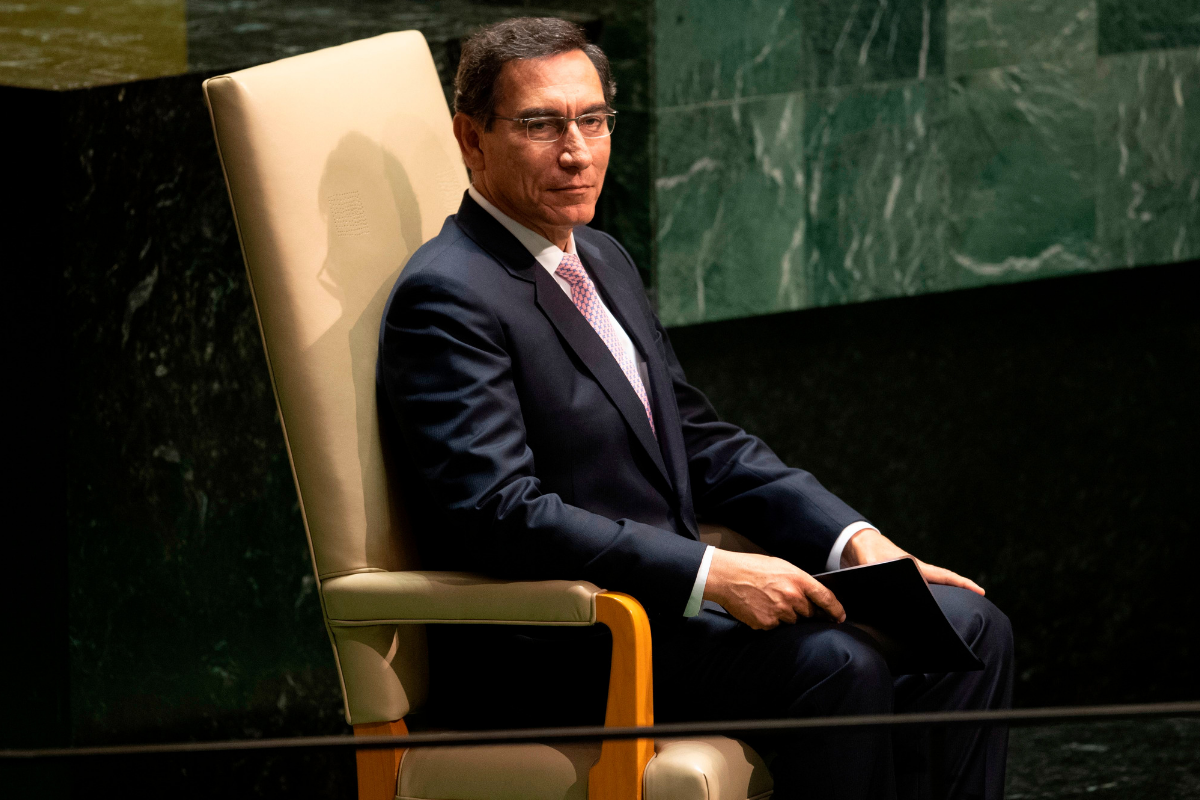 President of Peru Martin Vizcarra Cornejo waits to speak during the 74th session of the United Nations General Assembly on September 24, 2019 at the United Nations Headquarters in New York City. (Photo by Don Emmert/AFP via Getty Images)

After months of standoff, on the afternoon of September 30, Peruvian president Martín Vizcarra dissolved Congress and called for new legislative elections. The dissolution, he argued, “looks to give a democratic and participatory solution to a problem that has been dragging down the country for three years and finishing a period of gridlock that has impeded the country to grow according to its possibilities.” With these words, Vizcarra ended the largest opposition coalition in the legislation since the return of democracy in the 2000s, which in three years censured four ministers, pushed for the resignation of former president Pedro Pablo Kuczynski, and did not support a single important reform project from the executive.

The End Of The Cuestión

Chief Cabinet Minister Salvador del Solar had to literally push his way into the hemicycle of Congress in order to request the cuestión de confianza—a constitutional resource of the executive often used in situations of deadlock to demand explicit support of the legislative on particular issues. Del Solar resorted to this mechanism to propose a reform in the election of the members of the Constitutional Court. In reality, the request was meant to delay a discretionary election of judges scheduled for that day, which could have potentially benefited the fujimorista majority in Congress concerned with corruption accusations and with the liberation of their leader, Keiko Fujimori.

The Peruvian constitution establishes that if two successive cabinets requesting cuestiones de confianza do not obtain the legislature’s support, the executive can dissolve Congress. Despite this, head of Congress Pedro Olaechea decided to ignore the demand. Immediately after Del Solar spoke, Congress elected a member of the Constitutional Court—a de facto denial of the cuestión de confianza. Olaechea’s move represented an affront to president Vizcarra, who the night before announced that if the request was ignored, he would exercise his right to dissolve Congress and schedule legislative elections for January 2020.

Later in the afternoon, Congress decided to debate and vote on the cuestión de confianza, but it was too late. President Vizcarra gave a national speech announcing Congress’s dissolution. Everything that came after was a succession of disorganized and desperate moves from a political class that had lost popular support a long time ago. The dissolved Congress rushed to approve the cuestión de confianza, vote for the suspension of the president, and finally, swear in Vice president Mercedes Aráoz as the new president.

Aráoz resigned the day after, arguing on Twitter that her presidency was just a symbolic act with no real meaning.

The controversy centered around the legality of the dissolution. Members of Congress argued that it was unconstitutional to dissolve it before they had a chance to discuss the cuestión de confianza, whereas the executive claimed that by proceeding with the vote on the Constitutional Court, Congress was already denying the request. Over the following days, Peruvians witnessed on television a parade of law experts trying to settle the matter. Although a couple of congressmen from the fujimorista coalition attempted to leave the country, faster than expected, most members of Congress have started to accept the idea that their term has ended.

Beyond the legal conundrum, it is puzzling how a president without a strong political party, without an important number of supporters in Congress, and without a clear socioeconomic agenda could have managed to dissolve Congress and survive. Since he assumed the presidency after the resignation of Pedro Pablo Kuczynski in March 2018, Vizcarra has not given any sign of full commitment with a socioeconomic project different from his predecessors. Vizcarra’s Peru is still largely a continuation of center-right wing policies that have been governing the country for the last two decades.

Listening to popular demands, the only flag that helped the president navigate these difficult times alone has been anti-corruption efforts. Indeed, Vizcarra’s popular support has spiked every time his cabinet challenged Congress’s questionable acts. He would have not dissolved Congress without that popular assurance. In previous months, Peruvians gathered throughout the country expressing their discontent with the behavior of Congress and demanding its cessation. The day of the dissolution, there were people in the streets in favor of the decision in Loreto, Puno, Arequipa, Cuzco, Tacna, and Piura. People gathered in front of Congress in Lima to support the executive’s decision. While some members of Congress were denouncing a coup organized by Vizcarra to foreign media, the sentiment in the streets was of relief from seeing the exodus of a political class that, despite having the numbers to push for great reforms, did not meet its expectations.

Bringing Politics Back In

Only superficial disagreements have divided most of the Peruvian political class. After the fall of fujimorismo in the early 2000s, political parties and cabinets have mostly agreed on the same political and socioeconomic agendas for maintaining the status quo. This explains why Peruvians often say the country grows on autopilot. The Left has been one of the counterforces against this tacit consensus, though they did not have the numbers in Congress and were riddled with internal divisions and corruption scandals.

This last Congress installed in 2016 has kept the same pattern of action. Confrontation, however, has moved away from political programs to a form of sectarianism where everything is reduced to personal grudges. If anything, this Congress —mainly dominated by fujimorismo and the Peruvian Aprista Party— was known for obstructing every claim coming from their political adversaries, protecting the interests of their allies, favoring religious and conservative forces, and using their position as a shield from corruption-related accusations.

In response to an increasingly less proactive political class, people in the streets have been trying to bring politics back to Peru. Despite the image of stability that the last governments have tried to project, the demands that we now see raised in Chile and Ecuador have mobilized Peruvians over the last two decades.

In absence of representative political parties or social movements, demonstrations in Peru have become the main mechanism to denounce injustices and to voice political concerns often neglected in the chambers of power. Although not always covered by mainstream media, people in Peru’s 24 regions have expressed their discontent with mining projects, pollution, limited access to basic services, budget mismanagement, labor reforms, changes in school curricula, women’s rights, and lately, politicians involved in mafias and the Odebrecht scandal. Protests have been meeting the role of a real responsible opposition by stopping harmful legislation.

In fact, the only reason Peru is not in the same situation as its neighbors is because, despite the criminalization of protesters, the numerous local mobilizations have actually led to the creation of institutions of mediation, improvements in redistribution policies, and the derogation of detrimental laws. To a certain extent, all of this has helped to placate popular dissatisfaction with the political system.

President Vizcarra, whose actions were supported by 84 percent of Peruvians, is portrayed by some analysts as a leader capable of confronting the opposition. Current approval, however, seems to be a reflection of gratitude with a decision highly desired by Peruvians than of support to his administration. Vizcarra still lacks a solid popular base, and it is uncertain if he will be able to take advantage of the moment to build one. While the anti-corruption rhetoric is helpful to temporarily contain popular discontent, only real socioeconomic vindications tackling inequality can ensure Peru does not follow the regional trend.

In the past, Vizcarra’s cabinet showed willingness to listen to the people, as it did in the case of Tía María in Arequipa by suspending a mining project in the light of local opposition. At the same time, his administration is still not disentangled from conservative sectors. His new cabinet installed after the dissolution of Congress, as the Constitution stipulates, does not seem to be interested in challenging the status quo. For instance, Minister of Culture Francisco Petrozzi was part of fujimorismo. Vizcarra has yet to definitively prove he is different than his predecessors.

The new congressional scenario has brought Peruvians the great responsibility of setting the path of democracy for its political class. Without Congress, representative parties, or social movements that could counterbalance the power of the executive, the duty of oversight lies on civil society. At least until January —when legislative elections are scheduled— society will play a key role in continuing to bring politics back by pushing for important issues to be discussed nationally. At the same time, it must ensure that the executive does not exceed its powers: a heavy task for a population that has been continuously disappointed by its politicians.