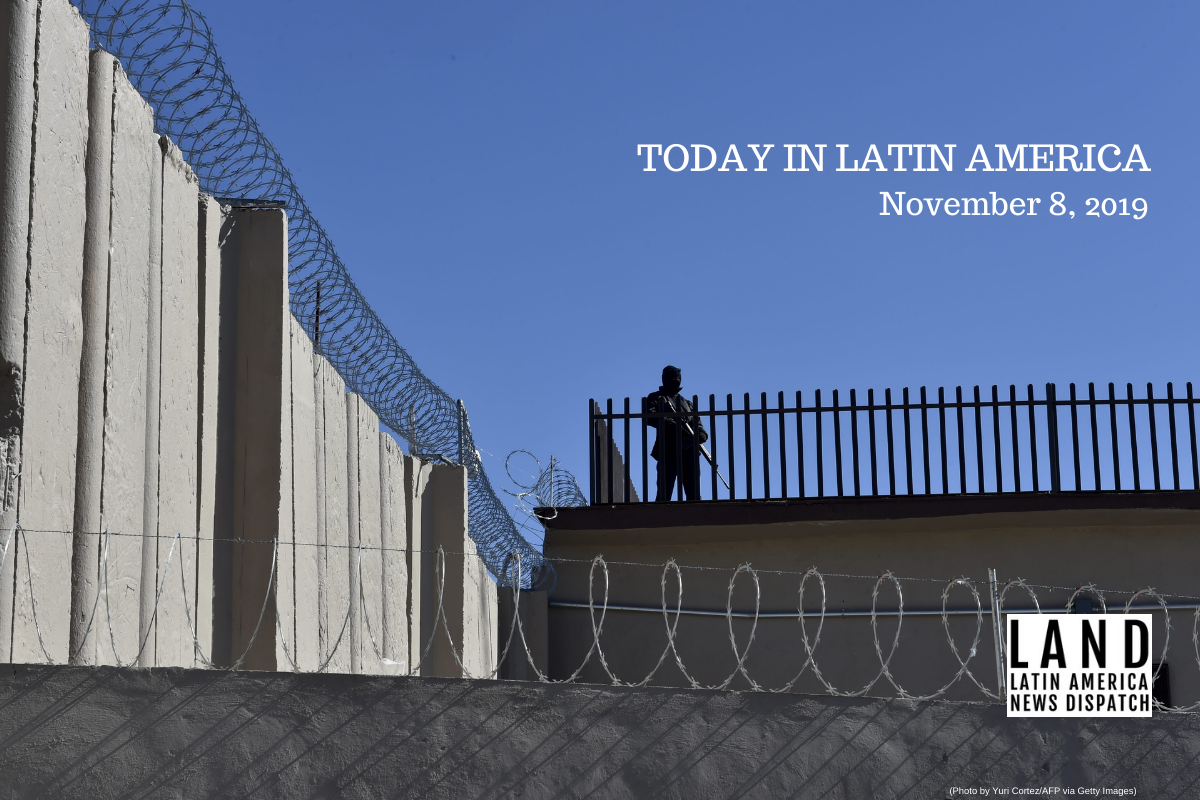 A prison guard keeps watch at the prison of Ciudad Juarez, Mexico. (Photo by Yuri Cortez/AFP via Getty Images)

MEXICO: Criminals inside a state prison near the U.S. border orchestrated a wave of chaos outside the prison walls in Ciudad Juárez as 850 Mexican local, state and federal security personnel prepared to raid the prison. Ten people were murdered in various incidents around the city Tuesday night and early Wednesday as inmates tried to create a diversion or pressure authorities to stop the raid. Chihuahua state prosecutor Jorge Nava called it a “Machiavellian plan to be able to get authorities to stop the operation.” Authorities did not provide details of the murders. But the violence set off in reaction to the government operation was reminiscent of October 17 shootouts in Culiacán that resulted in the release of the son of jailed drug lord Joaquín “El Chapo” Guzmán.

BOLIVIA: Tensions continue to rise after President Evo Morales’s re-election. According to the Ombudsman Office, 346 people have been injured and 220 incarcerated due to the protests that followed the presidential elections last month. Last Wednesday was the most violent, with 97 wounded and one man killed in Cochabamba, according to EFE. The protests began after Morales was re-elected for the fourth time on Oct. 20. His opponents took to the streets and raised questions about the legitimacy of the elections, while his supporters defend the electoral results.

CHILE: President Sebastian Piñera sent a bill to Congress that will raise the minimum wage as a way to calm down the protests that have taken over Santiago and other cities since Oct. 18. But to some, the measure is just “an act of desperation,” reported the AP. Desperate or not, Piñera hasn’t succeeded in ending the protests over inequality in the country. Last week, the leader announced that his country could no longer hold the U.N. annual climate conference (COP25) programmed for later this month. Also, a U.N. human rights commission is gathering testimonies about alleged police brutality, after Chile’s human rights commission, INDH, reported the killing of five people during the protests.

BRAZIL: The country’s most significant wetland, Pantanal, has been burning for at least a week now. Scientists estimate that an area as big as London has been consumed by wildfires. According to the authorities the fires will continue to burn due to the high temperatures the region is experiencing, in combination with strong winds. According to Brazil’s National Institute of Space Research, this year the area has suffered 516 percent more fires than in 2018. Pantanal, a tropical wetland that sprawls across Brazil, Bolivia and Paraguay, is one of the most biodiverse places in the world and a key place for ecotourism in the country.

GUATEMALA: A judge in Guatemala’s Court for High Risk Crimes is proposing a new law that will specifically address violence against journalists as a unique crime. Miguel Ángel Gálvez proposed new legislation at the International Seminar on the Impunity of Crimes against Journalists in Latin America this week, focusing on the murders of journalist Mynor Alegría Armendáriz in 2001 and Danilo López and Federico Salazar in 2015 as case studies. In each of these cases, the murders were part of a broader criminal network or government corruption. Gálvez argued that the crimes were unique and “aggravated” because they focused on silencing free speech. He intends to propose a law that recognizes this “magnitude” of crime.

PUERTO RICO: The Environmental Protection Agency announced a new research project focused on identifying Puerto Rican communities exposed to radon gas — the leading cause of cancer in non-smokers. The gas is hard to detect without proper equipment, making it a danger to communities that don’t have consistent oversight. Recovery initiatives and infrastructure improvements after Hurricane Maria have allowed for expanded regulation by U.S. agencies, however. The project will operate in collaboration with the Department of Civil Engineering and Surveying at the University of Puerto Rico and will inform new environmental regulations focused on toxic exposure.

CUBA: The British government released official emails and telegrams yesterday, detailing how UK officials and those on the ground responded to the so-called “sonic attacks,” also referred to as Havana Syndrome. While the correspondence was heavily redacted, the remaining messages show a lack of trust between Cubans on the ground and foreign officials, including British ambassadors. Cuban officials were described as “combative” and broad analysis showed local communities supporting the Cuban press coverage at the time. According to one message from August 2017, the fallout was “a bizarre cold-war style confrontation.” The wave of illnesses from 2016 to 2018 prompted a breakdown in relations between the United States and Cuba, including a series of expanded sanctions announced in the last month.

MEXICO: President Andrés Manuel López Obrador said he will not back down and plans to move forward with his plan to fight violence. AMLO acknowledged Mexico has been through difficult situations like the Culiacán cartel firefight and the LeBaron family massacre but assured that these events will not deviate his plan to combat violence. He also announced a change in his initial plan because of the recent pressure Mexico. The government plans on taking a more aggressive approach in order to get results against crime.

MEXICO/UNITED STATES: A mother and two sons were buried yesterday at the first funeral for the victims of a drug cartel ambush that left nine American women and children dead. About 500 mourners embraced in grief in La Mora, a hamlet of about 300 people who consider themselves Mormon but are not affiliated with The Church of Jesus Christ of Latter-day Saints. The other victims are expected to be buried in Colonia LeBaron later.

MEXICO: Mexican archaeologists say they made the first-ever discovery of pits built around 15,000 years ago to trap mammoths. Researchers from Mexico’s National Institute of Anthropology and History said the two pits contained about 824 bones from at least 14 mammoths. The traps are about six feet deep and 25 yards in diameter. One of the skulls found also had marks of a spear wound on the front. Luis Córdova Barradas, who led the five-person excavation team, said the find in Tultepec marks a watershed in the study of the relationship between prehistoric hunting and gathering communities and the huge herbivores.