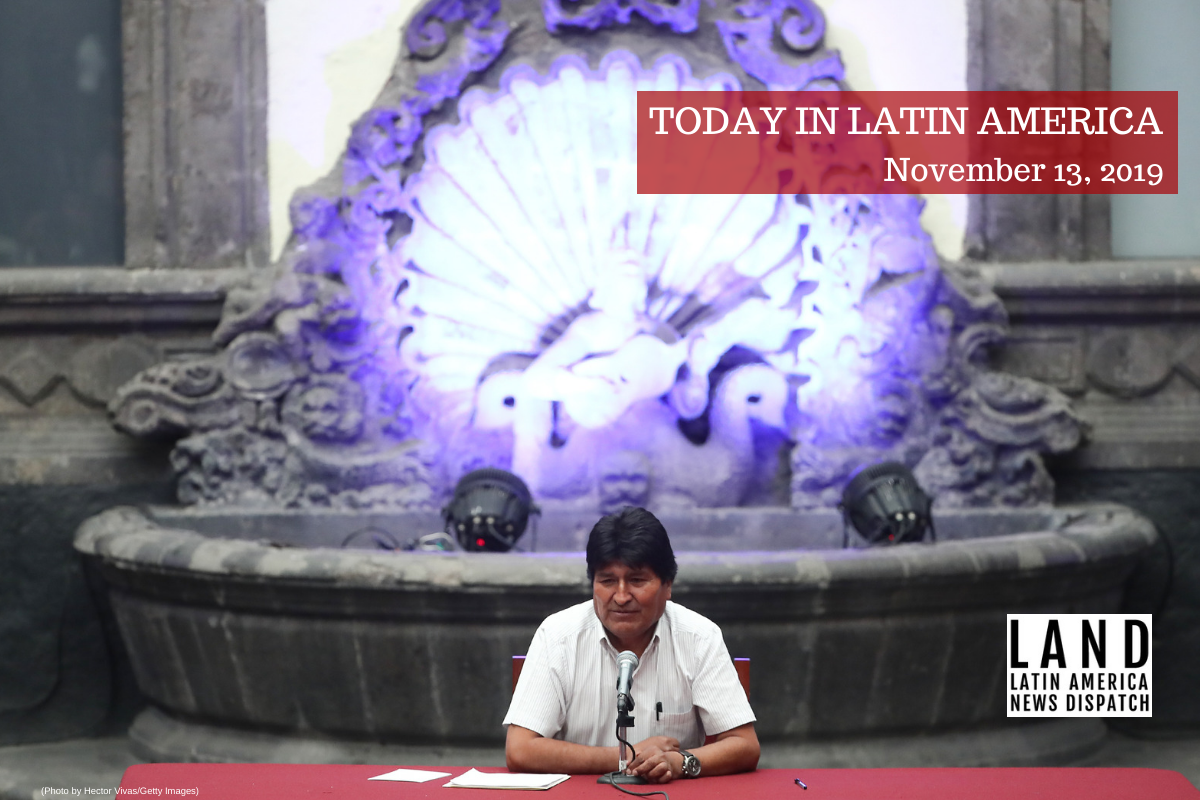 BOLIVIA: Evo Morales arrived in Mexico yesterday, while his supporters continue to protest against what Mexico is calling a military-backed coup in Bolivia. Morales was forced to resign on Sunday after weeks of unrest due to alleged fraud in the October 20 election. MAS party supporters marched in the capital of La Paz, but security forces prevented them from reaching the main plaza of the city. Morales arrived in Mexico City where he said, “The president of Mexico has saved my life.”

Mexican Foreign Secretary Marcelo Ebrard described Morales’ escape to Mexico as “tense” in a press conference yesterday morning. The Mexican air force plane was initially denied access to the Bolivian airport where Morales was to be picked up, and protesters surrounded the area. The plane was also denied permission to refuel in Peru and had to stop in Paraguay before landing in Mexico City.

Leaders from all over the continent have weighed in on the crisis, including the president-elect of Argentina. Alberto Fernández criticized U.S. President Donald Trump’s support of Morales’ removal. Fernández also questioned the election audit conducted by the Organization of American States. Meanwhile, senior officials at the U.S. State Department said the ousting of Morales in Bolivia is not a coup.

CHILE: Tuesday marked the 26th day of protests against Chilean President Sebastián Piñera. Thousands came out and shut down much of the country with largely peaceful protests. The Chilean peso also dropped to a record low exchange rate of 800 pesos per dollar. Piñera agreed Sunday to change the dictatorship-era constitution, but strikes continue. At least 20 people have been killed and more than 2,000 have been injured.

VENEZUELA: European Union foreign ministers extended sanctions for another year against Venezuelan President Nicolás Maduro’s government yesterday. The sanctions included an arms embargo, an asset freeze and a travel ban on 25 government officials. The EU continues to recognize Juan Guaidó as president and blames Maduro for the crisis that has forced millions of Venezuelans to flee the country.

JAMAICA: Jamaica’s minister of health and wellness, Dr. Christopher Tufton, announced Friday that the government will begin moving non-violent incarcerated individuals with substance use and or psychiatric disorders from jail. A recent audit of Tower Street correctional facility found that nearly one in eight inmates had been diagnosed with a mental illness. The announcement was part of the government’s larger “Speak Up, Speak Now” campaign to destigmatize mental illness.

COSTA RICA: The crisis in Bolivia will prevent goalie Leonel Moreira from joining the Costa Rican national soccer team in its upcoming matches against Curaçao and Haiti. Moreira, who plays for the Bolivian soccer club Bolívar, was slated as a last-minute replacement for Keylor Navas, who is injured. Bryan Segura will take Moreira’s place.

UNITED STATES: The U.S. Supreme Court heard arguments yesterday on a 2010 case about whether or not the parents of a Mexican teenager fatally shot by a Border Patrol agent are allowed to sue the agent in the United States. Officials chose not to prosecute the agent at the time of the shooting, and the Obama administration refused to extradite him so that he could be tried in Mexico. This is the second time the case has been heard by the Supreme Court. The case was sent back to lower courts in March. SCOTUS also heard testimonies from recipients of the Deferred Action for Childhood Arrivals program yesterday.

UNITED STATES: British officials in Anguilla said yesterday that they plan to issue a warrant for the arrest of U.S. citizen Scott Hapgood, who is facing charges for his alleged involvement in the death of a worker on the Caribbean island. The case has caused racial tension on the island, and appears to have caught the attention of U.S. President Donald Trump. Under current laws, Anguilla is subject to an extradition treaty between the United States and Britain. Hapgood is not expected to face extradition if he chooses to travel outside of the U.S., unless requested by the British government. If this occurs, the U.S. Secretary of State would then decide whether or not to go through with the extradition.

U.S.-MEXICO BORDER: The United States has detained more migrant children away from their parents than any other country this past year, according to United Nations researchers. Although the U.S. government has acknowledged the trauma that being detained away from parents causes these children, approximately 4,000 are currently still in government custody. The more than 69,000 children detained by the U.S. in the past year have spent more time away from their families than children detained in previous years. President Trump’s strict immigration policies are believed to be the cause of the longer detainment periods.