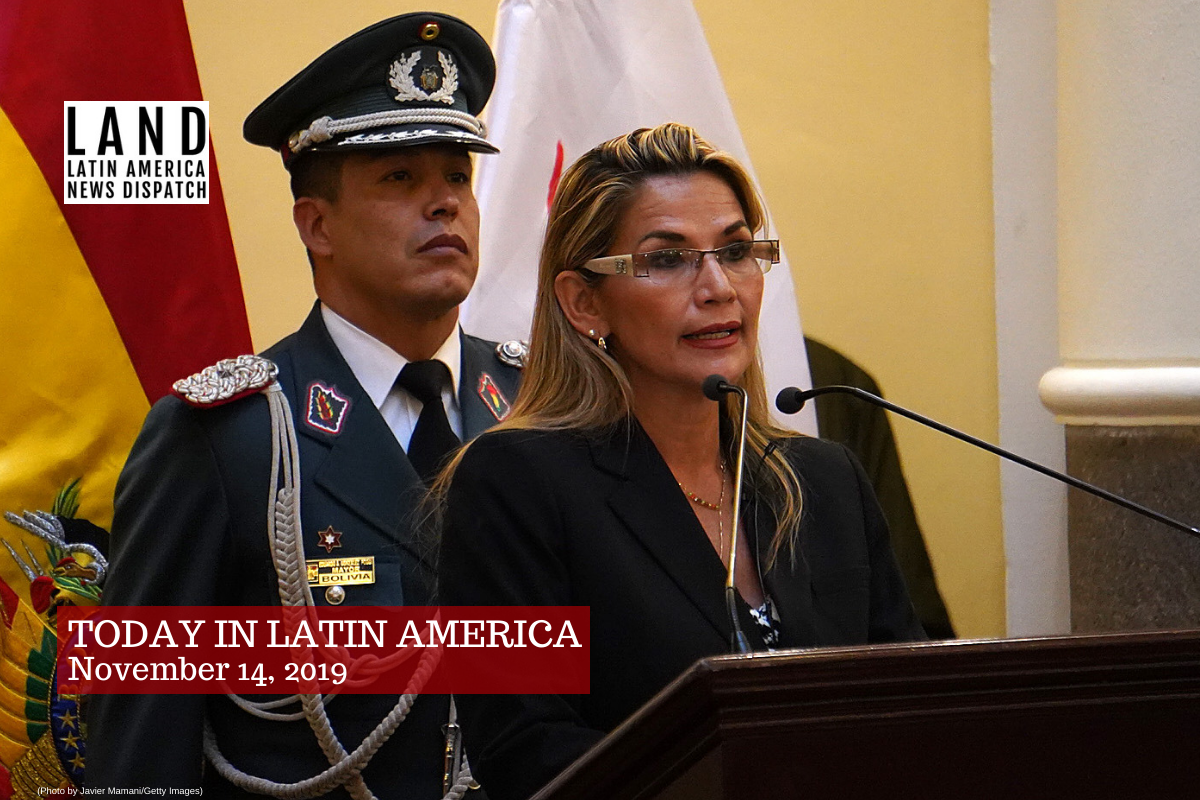 Jeanine Áñez, who declared herself Interim President of Bolivia, talks during a conference at the presidential palace on November 13, 2019 in La Paz, Bolivia. (Photo by Javier Mamani/Getty Images)

BOLIVIA: After former President Evo Morales was forced to resign, Bolivian opposition senate Vice President Jeanine Áñez declared herself interim president according to the Bolivian constitution. After three politicians before her in the line of succession quit as part of mass protests, Áñez said she would assume the post, denying accusations of a coup. Áñez also mentioned her desire to hold elections in Bolivia as soon as possible. She was not appointed leader by lawmakers, as Morales supporters boycotted the parliamentary session, but she was endorsed by the Bolivian Constitutional Court.

VIA @AP: #Bolivia’s interim leader Jeanine Añez says that former President Morales' political party can participate in a new presidential vote. But she says that Morales will not be allowed to do so.

Morales, who has accepted political asylum in Mexico after violent protests, has said he is ready to return to pacify Bolivia if the people ask him to. Foreign governments, including the United Kingdom, Canada and the United States, have issued travel warnings to Bolivia, advising against all but “essential” travel to the country due to continuing protests. Yesterday, police killed one 20-year-old protester in Santa Cruz as he allegedly tried to loot a bank.

BRAZIL: President Jair Bolsonaro met with Chinese President Xi Jinping at Brazil’s foreign ministry for an international summit in Brasilia, the capital. China is currently Brazil’s largest trading partner, with investments between the two countries totaling almost $60 billion from 2007 to 2018. Bolsonaro said his government hopes to diversify its exports to China in the near future. Xi’s attendance at the bilateral meeting of international leaders is his first visit to Brazil since 2014.

BRAZIL: A group of around 20 supporters of Venezuelan opposition leader Juan Guiadó entered and occupied the Venezuelan Embassy in Brasilia yesterday. Representatives of Venezuelan President Nicolás Maduro described the event as a “forcible invasion,” while representatives of Guiadó said that embassy workers opened the gates to let Guiadó’s supporters in. Brazilian supporters of both Maduro and Guiadó clashed outside the embassy. The incident occurred on the first day of the BRICS summit – representing Brazil, Russia, India, China and South Africa – hosted in Brazil, the only nation of the cohort to recognize Guiadó as the leader of Venezuela.

VENEZUELA: The United Nations refugee agency said that Latin American and Caribbean nations hosting Venezuelan refugees will need over $1.35 billion to respond to the crisis. Approximately 4.6 million Venezuelan migrants and refugees have sought safety around the world, with around 80 percent seeking refuge in countries throughout Latin America and the Caribbean. The U.N. reports that 6.5 million Venezuelans could be living outside the country if current trends continue. Officials have been trying to raise awareness and funding for the crisis, which has received little aid compared to other international crises.

VENEZUELA: Spanish police say that ex-Venezuelan intelligence officer Hugo Carvajal is missing, only days after a Spanish court agreed to extradite him to the United States. Carvajal, who went against the Maduro regime, is wanted in the United States for drug-trafficking charges, which he has denied. Carvajal, also known as “El Pollo,” served as the military intelligence chief under Hugo Chávez and as a lawmaker in the Maduro government. Carvajal urged the military to break with Maduro and support opposition leader Juan Guiadó. Last September, the Spanish court sided with the defense arguing the United States’ extradition was politically motivated, but this decision was appealed and reversed last week. Details of the ruling have not yet been made public.

PUERTO RICO: The island earned an overall grade of D-minus in an American Society of Civil Engineers (ASCE) report card released on Tuesday. ASCE inspected eight infrastructure categories across Puerto Rico including roads, ports, bridges and drinking water systems. The island’s energy grid got an F. The report, which is the first time ASCE evaluated and released results for Puerto Rico, concluded that the island would need to spend upwards of $23 billion over 10 years to update its failing infrastructure and support economic growth.

GUATEMALA: On Tuesday, Guatemala’s Congress voted to amend the country’s procedural penal code and approved reductions for jail sentences resulting from corruption convictions. The reductions could reduce jail terms by up to 50 percent for individuals who confess to their crimes and accept the charges brought against them. The reduction percentage will depend on whether the accused admits to their crimes, and the sentence cuts will only go into effect once the accused agrees to compensate their victims. Of the 81 representatives who voted in favor of the changes, many of them are themselves under investigation for corruption.

PANAMA: Attorney General Kenia Porcell announced that she is resigning as the head of the Public Ministry of Panama. Her resignation, which will go into effect January 1, comes after WhatsApp messages were leaked between her and former president Juan Carlos Varela. The leaks have called into question Porcell’s impartiality, and the state council is considering opening an investigation. The messages, which have been dubbed Varelaleaks, were published online on November 6 by an anonymous group and allegedly show conversations from 2017 and 2018 between Varela and top Panamanian officials as well as Venezuelan officials and members from Panama’s private sector in which they discussed bribes, the Odebrecht corruption scandal and more.

HONDURAS: A ConfidencialHN investigation found that President Juan Orlando Hernández financed his presidential campaign for reelection in 2017 with over $162 million —4 billion Honduran lempiras— taken from public funds meant for the country’s agricultural sector fund. The investigation alleges that Hernández gained access to a large sum of public funds by granting 26 emergency contracts, totaling over $25 million between 2017 and 2018. These funds were meant to be used for agricultural and other related farming purposes as well as for emergency preparedness for El Niño.

U.S.-MEXICO BORDER: Trump administration officials plan on launching a live-stream showing construction of President Donald Trump’s border wall, despite objections from the U.S. Army Corps of Engineers and senior Border Patrol officials. A senior White House official told the Washington Post that the “wall cam” will launch as early as next year and that the live-stream aims to rally support for the border wall. Construction and planning for the border wall have already cost taxpayers billions of dollars and has been delayed numerous times due to disputes over private land in parts of Texas where the wall is scheduled to be built.